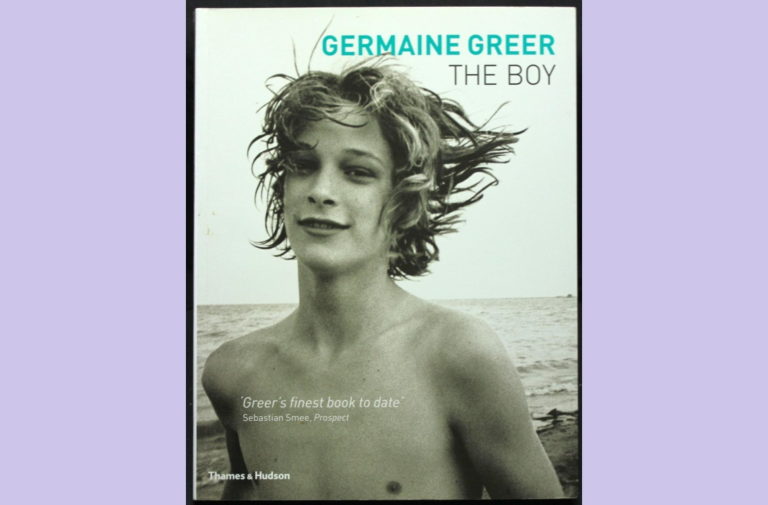 When I heard Germaine Greer had written a book about the beautiful boy, I was very excited. Right from when I became aware of my sexuality, I maintained a sharp eye for separating the boys from the men and it was nearly the bright-eyed, ready-for-anything, malleable boys who came out tops. At school, there was no crush on some ‘dashing’ male teacher. I found watching the boys playfully wrestling during lunch hour to be far more engaging.

Seeing Greer talking on TV about the joy of the boy has really inspired my imagination, thinking about all the lovelies I ever admired and wondering how many of them have allowed themselves to retain even a fraction of the splendour that made them so gorgeous at the time.

As Greer recently said on the South Bank show, the beauty of the boy is fleeting in its nature. She talks, early on in the book, of boyhood as a very specific, short passage of time and, in interviews, has spoken of ‘simpering 30 year olds with shaved chests’ with disdain. I agree there is an element of physical beauty in a teenage boy that is often lost with age. However, I would also say the greater loss occurs when a man is taught to reject the parts of himself that are open and trusting (i.e boyish) in favour of jaded and prescriptive dogma (i.e “confining himself to the narrower scope available to him in patriarchal society”, as Greer puts it later in the book).

‘The Boy’ has been well publicised. Before even looking at it, I felt like I had read it already. I found Greer’s constant references, when plugging the book, to sperm that ‘runs like tap water’ quite arousing at first (in a rather silly far-fetched sort of way). But before long, I was cringing whenever she came on TV, hoping she would say something different this time.

I started to wonder why she keeps repeating herself. After all, this is Professor Germaine Greer, ‘Everybody’s Favourite Feminist’ and an undisputed expert at self-promotion. Is her central message actually about spunk? Is she simply getting excited about the delight of getting covered in a big warm jet of youth-juice? Or is she actually spreading the word on how virile young men are? Of course, we all know that volume is not actually indicative of potency but, in terms of immediacy, the image of ever-flowing sperm falls perfectly in line with a typically acceptable masculine role. I’d say Greer keeps rapturously going on about sperm because she knows that the general heterosexist, reproduction-focussed public will subconsciously dig that particular sound bite. If the archetypal boy’s subtlety and prettiness is counterbalanced by his ability to impregnate, conventional society will probably find him more palatable. Greer knows which one-liners are most likely to get the public onto her vibe and, as usual, is being very astute.

So how does Greer define a boy? Early on in the book, she says that a boy is someone who is “no longer a child but not yet a man”. However, when looking at the selected pictures, it becomes apparent that this is a matter of opinion. I would say that, in Titian’s depiction, the twelve-year-old Ranuccio Farnese appears (as his age suggests) to be a child. A self-portrait by Van Dyk is included in the book because it is said to nostalgically derive from a self-portrait he painted when he was in his teens. I haven’t seen the earlier self- portrait, but would say he looks at least 35 in the picture included, an age that would no doubt qualify him as a man by most viewers’ standards.

If boys are looked at, they become more ‘like girls’ and conventional society still sees being ‘like a girl’ as an inferior state.

One of this book’s greatest strengths is its accessibility. Whatever your sexuality or gender, this is a book that will persuade you of the immense beauty of boys. Whether it’s Louis David’s ‘sun-tanned, hard-bodied Cupid who grins knowingly at the viewer as if he were a street boy slipping out of the bed of a sated princess’ or a naked David Cassidy (actually slightly older at 24) squeezing his slim but muscular arms across his smooth chest and swaying his nubile hips, you’d have to be extremely blinkered not to acknowledge the appeal of at least some of what this book showcases.

Greer successfully convinces the reader/viewer that boys have a special attractiveness that sets them apart from girls, women and men. What does society have to lose if it just admits that boys deserve this to be properly recognised? The problem lies in our attitudes towards the act of looking and being looked at. Greer points out that “the substitution of the word ‘handsome’ for ‘beautiful’ when referring to a male is a linguistic sign of an implicit understanding that it is wrong, demeaning even, to appreciate men for their looks”. In doing so, she illuminates the real source of conventional society’s refusal to accept the allure of boys. If boys are looked at, they become more ‘like girls’ and conventional society still sees being ‘like a girl’ as an inferior state.

The results of this protection from the horrors of objectification are intriguing. Society seems embarrassed by men’s adolescence to the point of gross-out. When Greer describes the stages of maturation (for example, the first wet dream, breaking of voice and first shave), the reader is reminded of Naomi Wolf’s descriptions of boys (in The Beauty Myth) and her admittance that these descriptions elicit awkwardness in the both the author and reader.

Male friends of mine, whether gay or hetero, have remarked on how grotesque they think boys are but, personally, I am baffled as to how the charm of boys can go so unnoticed. For example, I can remember that the typical teenage boy has a particular way of flirting that seems to stagnate in the grown man. Heterosexual teenage girls lose out when they ignore this in their pursuit of high-status, high-demand older men. As a schoolgirl, I delighted in the attention of my boy-peers. Despite a general lack of success with the boys I truly desired, I rarely made any effort to hide my attractions and the redundant half-baked poke on my arm, playful interest in the contents of my schoolbag and shyly muttered experimentations with affectionate chat-ups were all signs to me that a boy had some idea I liked him and was now tentatively testing me to see how I would react.

Does society actually secretly believe it is right and proper for a girl to be sexually indoctrinated by someone older – rather than the peer who is her true equal?

There are implications for young girls when society dismisses boys as not worth looking at. Mothers and fathers send out the message that boys are awkward, ungainly and silly. They give the impression that boys have nothing to offer but are suddenly horrified when their daughters go out with older men. If they don’t like it when this happens, why aren’t they encouraging heterosexual girls to discover their sexuality with boys their own age? Or does society, for all its moral outrage, actually secretly believe it is only right and proper for a girl to be sexually indoctrinated by someone older and ‘wiser’ rather than the peer who is her true equal?

There are also unfortunate implications for boys when society does not recognise them as potential objects of desire. Proving they’re not (god forbid!) ‘like girls’ must be exhausting. In fact, it may even fly in the face of their instincts and desires as boys. As Greer states, when referring to the native American Osage braves who carry mirrors so they can adjust their elaborate coiffures, there are instances of men parading themselves “so numerous that we might wonder if preventing them from beautifying themselves and displaying that beauty is both counter-instinctive and counter-productive”.

How you view Greer’s book depends on your attitude towards the power of looking. Is objectification always demeaning? What happens to society as a result of girls looking at boys? Are we morally bound, as feminists, to denounce any kind of overt looking or superficial admiration on the grounds that to subject another person to such scrutiny is just an echo of traditionally ‘male’ behaviour (behaving ‘badly’ in the name of liberation)?

Obviously, being reduced to a sex-object without consent and to the exclusion of all else is completely unacceptable. But I would also say there is a pleasure in self-display that should be shared with those men and boys who have been conditioned into thinking that the only gratification and power is in looking. If we throw away all objectification as a worthless symptom of oppression, boys lose out on using and enjoying something powerful they possess and girls lose the right to something we had within us all along: the enjoyment of looking. Basically, I’m happy to play cutie from time to time, if it means I can have a slice of the pie too. I’ll show you mine, if you show me yours.

Holly Combe would like to point out that she is not the age Real Magazine recently recorded. You can read more of her stuff on www.girlchick.com [Corrected by writer on 26 September 2016, with working link now included.]