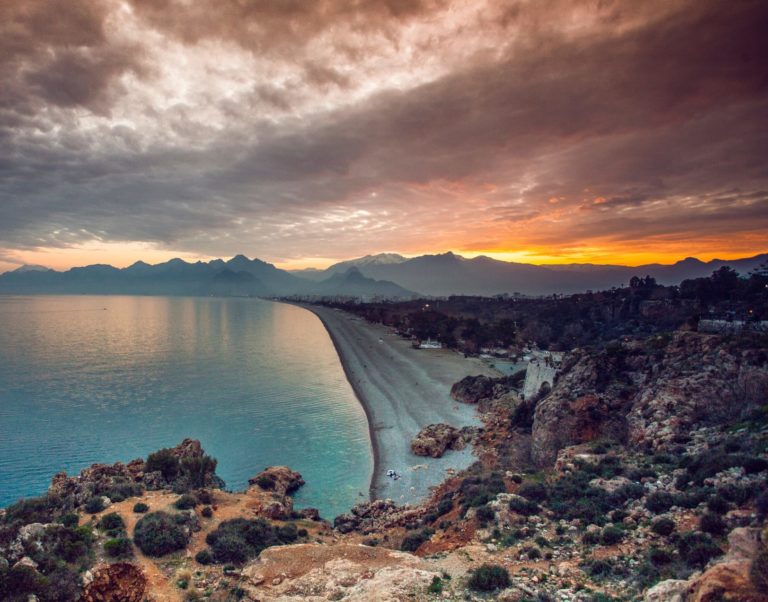 War in Iraq, war in Israel, war in Afganistan… and war on the screen in Wolfgang Peterson’s Troy. Hollywood reputedly spent one hundred million dollars on Peterson’s film, and the timing of its release is interesting, given the above mentioned conflicts. Are cinema goers to be barraged by a gung ho, action hero, boys own war story designed to buoy up flagging support for the war in Iraq? No, they are not. On the contrary, Troy is more M*A*S*H or Oh What A Lovely War! than Saving Private Ryan in sentiment.

That Troy can be seen to be highlighting the ultimately pointless nature of war is probably down to the film’s source material. The film was inspired by Homer’s ancient, epic poem the Iliad (altough it also features nods to the Odyssey and the Aeniad) which detailed the last few weeks of the ten year long Greek/Trojan war. The influence of Homer’s poem on the film can also be heard in the lyrical quality of many of the speeches. The mythical story of Troy, passed down and retold in various literary forms since Homer’s day, runs something like this: Over 3,000 years ago the armies of Greece led an extensive attack on the walled kingdom of Troy after Paris, a prince of Troy, stole Helen, queen of Sparta, from her husband Menelaus. After years of slaughter and seeming stalemate, Odysseus, the king of Ithica, known for his cunning, hit on the idea of presenting the Trojans with an enormous wooden horse as a gift in order to gain entry into the city. Once inside, the Greek soldiers poured out of the horse, sacked Troy, and burned it to the ground, carrying off plenty of wealth and numerous Trojan women in the process. The women were raped and/or sold into slavery, and/or murdered, whilst most of the heroes died at Troy or – in Odysseus’ case – spent a further ten years trying to go home.

Troy the film throws up a number of questions, not just concerning war, but also notions of femininity and masculinity. Whilst Menaleus, the slighted Spartan king, is presented as violently misogynistic, his brother Aggamenmon is presented as greedy and mercenary: a man who wishes to conquer the world, who is only too keen to use the slur on Menaleus’ honour to start another war. Helen, played by Diane Kruger, is played according to Homer’s descriptions of her. Her beauty is her dominant characteristic and – unfortunately – it overshadows all else about her. Helen (if she ever existed) was “the face that launched a thousand ships” and “the most beautiful woman on earth” and, in Peterson’s film, she is given mainly to looking vulnerable and worried, as is Hector’s (the other prince of Troy) wife, Andromache. Andromache is shown mainly with her child, worrying about whether Hector (who, in this version, is a nice enough bloke as well as a good fighter) will come back from the fighting today or not, and how she and her son will cope if he doesn’t.

Helen gets more lines than Andromache, but her powerlessness, her status as a trophy wife, to be faught over by Paris and Menaleus is, as ever, never entirely subdued. Orlando Bloom as Paris, however, plays him as a young man more capable as a lover than a fighter. He challenges Menalaus to a duel, and is quickly beaten to the ground by the older man, where he cowers and clings to his brother’s leg as Menaleus taunts him about his perceived lack of manhood. Until Hector puts Menaleus out of his misery that is. Hector (Eric Bana) too is portrayed as a family man, not just a warrior, and – on the Greek side – Brad Pitt as Achilles and Sean Bean as Odysseus play men who know war is stupid, that our leaders are foolish, greedy men, and – most importantly – who aren’t callous brutes. Odysseus, we learn, is in Troy because, as a king of a small kingdom, he cannot afford to offend the mighty Aggamenmon for political reasons. Consequently he seeks to resolve things as quickly and as bloodlessly as possible so that he can go home. Achilles, meanwhile, as the subject of a prophecy that damns him to choose between a long, happy but uneventful lif of anonymity or a short life leading to eternal glory, has chosen the latter path. He is “the greatest warrior” and, as Brad Pitt plays him, he is arrogant yet weary and fatalistic. When he returns from a long days fighting to find Briseus (Rose Byrne) tied up in his tent, having been presented to him by the men as a trophy of their successful attack on the Trojan temple to Appollo, he talks to her rather than raping her, and when that fails, he leaves her alone to calm down a bit before having another attempt at conversation and cleaning her wounds.

Briseus, the virgin temple priestess, represents the more spirited female characters created by Homer, and his contemporaries. She appears to be an amalganation of Homer’s character of the same name, and Cassandra, princess of Troy (sister to Paris and Hector), who has also been written of as a priestess of Appollo. Cassandra is most known for her abilities as a prophet, and the curse placed on her by Appollo that – whilst predicting distant events with accuracy, she would never be believed. Cassandra’s story, or various re-interpretations of it, has been taken up in recent years by writers, such as Marion Zimmer Bradley and Theresa Tomlinson, who have sought to write more female centred versions of the Troy story.

Whilst Peterson’s Briseus doesn’t prophecise, she does fight back, firstly against Achilles, then against his men when Aggamenmon removes her from Achilles protection and hands her over to Achilles men to be raped. Briseus could be seen to represent the sole strong female character in Peterson’s film, and that is a shame because various early versions, and more recent versions of Troy tell of at least one Amazon warrior who faught at Troy. As regards the female characters included in Peterson’s film, whilst we know that Helen chooses willingly to go to Troy, and whilst we see Briseus fight back against her captors and challenge Achilles’ decisions, it is a pity so little is made of Andromache as a character. So much has been done to convey Achilles, Odysseus, Paris, Hector, and King Priam (played here by Peter O’Toole) as men who are both strong and vulnerable, lovers and fighters, sensitive and murderous.

On the other hand, having been subjected to trailers for the re-make of The Stepford Wives and for a rather aggressive piece of fluff entitled Thirteen Going On Thirty prior to Troy, I would summise that gender relations in Trojan times, whilst delivered via Hollywood, come off as looking a good deal healthier than in contemporary themed Hollywood films.

Photo by Mahir Uysal on Unsplash