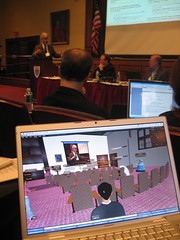 Belgian police are “patrolling” the virtual world of Second Life, after a user reported being raped in the game.

Local newspapers, as WTFsrsly has it, are reporting that the “Brussels Court will work together with the Federal Computer Crime Unit to ‘patrol in Second Life’ because of a virtual rape case with a Belgian Second Life user. Brussels police is currently investigating this case and says: ‘It is our intention to find out if a crime has been committed.'”

Following on from the recent news about prostitution/porn on Second Life, again, we need to think through how we understand a character being raped in a virtual world.

It seems like there is a rape culture being built up on Second Life: for example, it is possible to buy a sort of rape add-on, which makes your Second Life avatar able to attack other characters. And you can also “buy” a rape fantasy.

Nice that the purchase takes place in an evocative back alley, with the actual rape set in some kind of red cobblestone gimp-dungeon.

WTF’s interpretation of this phenomenum is interesting and wrong-headed in itself:

But normally such modifications require consent from the other player. In other words: you can only get raped if you want to. So what’s going on here? It’s possible that this is just typical IRC-style ‘chat harassment’ that got blown out of proportion.

It strikes me that real-life harrassment, that just happens to be carried out online in a virtual world, is a very serious issue that shouldn’t be downplayed as “just” harrassment. In addition, people become very invested in their online personas. For that avatar, which you may use in your professional life to network, or as an extension of your social life, to be raped would also be a very serious thing – if not on a par with the “real” crime of rape.

Obviously, there are more serious things to think about – but in the age of text message bullying, it cannot be easily dismissed.

Photo by stevegarfield, shared under a Creative Commons license