300 Spartans and one strong broad 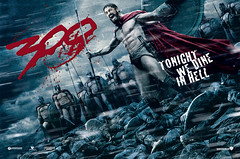 I wasn’t expecting to like 300, the film adaptation of Frank Miller’s graphic novel: not only was his previous film, Sin City, reviled by feminists, but I had already read reviews attacking this tale for its historical inaccuracy, its representation of the Persians as war-mongering, hedonistic savages and its preposterous portrayal of the Spartans as early freedom fighters. So I was somewhat surprised to find much in this depiction of the Battle of Thermopylae which appealed to my feminist principles, although only one female character is named and women are entirely absent from the vast majority of the film.

300 tells a highly-fictionalised version of the story of the build-up to conflict and battle in 480 BC between King Xerxes’ invading Persian forces and King Leonidas’ Spartan soldiers. Heavily outnumbered, the 300 Greeks hold off their enemy until betrayed by a Spartan pariah, who reveals a hidden path leading behind the battle lines. They are eventually defeated but die what they consider “beautiful deaths”, sacrificing their lives for their city state.

I have never seen a film which so eroticises the male body, with every battle scene as much a tribute to rippling six-packs as to Spartan courage

Perhaps unsurprisingly for a war film set in the ancient world, the female characters are limited in number: aside from a brief appearance from King Leonidas’ mother, the only women to feature are Leonidas’ wife, Queen Gorgo, an oracle and the slaves in Xerxes’ harem. The oracle and the harem girls are one-dimensional, their sole purpose to glamourise female sexual subordination.

In the director’s defence, the oracle’s scene, short as it is, is balanced out by a film-long fixation on the male form: 300 may objectify, but at least it objectifies men and women in fairly equal measure. I have never seen a film which so eroticises the male body, with every battle scene as much a tribute to rippling six-packs as to Spartan courage.

In a film with limited characterisation, Queen Gorgo stands out as having the most developed, interesting personality of the lot

Yet while the film has a distinctly homoerotic feel to it, the film-makers, and, indeed, Miller in his graphic novel, declined to show any homosexual relationships (branching away from the reality of Spartan life), probably fearing this would put off mainstream cinema goers. Instead the only sexual relationship we see is one of heterosexual devotion between husband and wife, King and Queen.

Spartan women had far greater freedom than other women of the time: they received a public education, played sport and could own and manage land; thus the film provided fertile ground for the establishment of strong female characters. Nonetheless, the director closely follows Miller’s mythology rather than historic fact, so its portrayal of women could have been as misogynistic or as fine-tuned to feminism as the producers wished.

In a film with limited characterisation, Queen Gorgo stands out as having the most developed, interesting personality of the lot. An early scene shows a Persian emissary visiting Sparta, requesting that the Spartans recognise Xerxes’s supremacy. Leonidas is asked by the messenger why he allows his wife to speak back to men, to which she replies, “Because only Spartan women give birth to real men.” Certainly it’s not ideal that a woman’s strength is defined by her role as baby-maker: her answer suggests it is only through her production of children that she gains her entitlement to a voice, but at least it is an acknowledgment that the survival of humanity and the transmission of any society’s values are reliant upon women. And further, the scene emphasises that it is the strongest of men who accept women as equals, since they are more secure in their masculinity. Perhaps even more importantly, before disposing of the Persian emissaries in the Spartan way (throwing them down a well) it is to Gorgo that Leonidas looks, seeking her permission: it is only with her backing that he will act in this manner, knowing that it will lead inevitably to war.

Gorgo is Leonidas’s adviser, his confidant and his equal: he turns to her again when considering whether to go to war without the oracle’s permission. Prior to parting, we witness their passionate love-making. Gorgo does not remain passive, as is usual in a Hollywood production, and the scene reveals even in their most private moments their equality. Further, Gorgo sheds no tears when her husband leaves to fight: the director resists the temptation to make her stereotypically “feminine” and emotional. In fact, she tells Leonidas either to return with his shield (victorious in battle) or on it, dying a hero’s death.

Perhaps unsurprisingly given Miller’s widely-touted misogyny, Gorgo’s role in his graphic novel was minimal; it is to the credit of the director Frank Synder that her role was expanded for the film

But it is in Leonidas’s absence that Gorgo really comes into her own. Having sought a hearing with the Spartan council to request that they officially go to war with the Persians, she is then betrayed by a politician, Theron, whom she had traded sex with for his promise of support. Her bodily sacrifice mirrors that of her husband’s eventual sacrifice of his life: she too will do anything to save Sparta. Admittedly, this sacrifice hardly smacks of female empowerment but it shows a woman who does not cower in fear while her husband fights, but does all she can, just as he does, to protect her nation. This does, however, push plausibility a little: why an intelligent woman would trust the word of a man she has previously decried for his mendacity remains unclear: methinks a necessary though deeply contrived plot device.

Following Theron’s betrayal, Gorgo, restrained by two men in her rage, fights free, grabs one of their swords and kills Theron, whispering to him the same very lines he used when raping her: “This will not be over quickly. You will not enjoy this. I am not your Queen.” Avenging her rape marks a moment of triumph; how many other fictional rape victims get to confront their abuser at all, let alone in so direct a manner? As he falls to the ground, coins with Xerxes’ image fall too (again, rather contrived: you would have thought he’d have the good sense to bury these in the ground rather than risk exposure), but this serves to further cement Gorgo’s position as Sparta’s heroine and Theron’s as its traitor.

Rather depressingly, there has been some debate over whether what happens to Gorgo constitutes rape. I feel those questioning this are guilty of the usual assumption that a rapist is a stranger in a dark alley. The Queen is raped since she is no less coerced than a woman who physically struggles against her rapist: for there to be any hope of the soldiers’ survival, Gorgo feels she has no choice but to have sex with Theron. She gives no real consent, for she is willing only because she is facing the direst of alternatives: her husband’s death and the fall of her beloved kingdom.

300’s portrayal of women is by no means perfect. But the presence of such a powerful woman raises this film above your average ‘boys’ film’ which for too long have been guilty of the assumption that men have no interest in seeing strong women on screen. In Queen Gorgo we have a woman who goes far beyond the traditional female roles in such films of supportive wife or sexual fantasy. Interestingly, and perhaps unsurprisingly given Miller’s widely-touted misogyny, Gorgo’s role in his graphic novel was minimal; it is to the credit of the director Frank Synder that her role was expanded for the film. Without this change, 300 would have been no different from so many movies of its ilk, limiting women to the roles of victims, mothers, wives or whores; instead, the writers chose to highlight the struggle of a strong and brave woman to make her voice heard, whose strength and bravery equalled that of her Spartan King.

Rosamund Urwin wishes she were Queen Gorgo, only without the whole husband dying a very bloody death thing. She is actually a masters student and hopes to become a journalist.