A feminist guide to ballet

This is a story of how I learned to stop worrying and love ballet. Sort of.

After years of training in classical dance, I gave it up aged 10 on the premise that it wasn’t ‘cool’. For years, I didn’t regret it. But, slowly, I’ve started to look back differently on the experience, as one of feeling empowered to do something I loved, and this March I decided to do something about it. I decided to take back the tutu.

Considering that Germaine Greer once reportedly called ballet a “cultural cancer”, I know this project is not going to be easy.

I’m not the sort of woman that people credit with ballet in her past. It could be the tattoos or the punk-rock aesthetic. But it comes down to this: ballet, in the public consciousness, is for ultra-feminine, delicate girls. 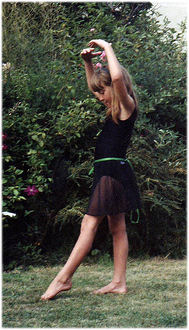 My love-affair with ballet started young. I don’t remember when I began to pester my parents for lessons. They gave in when I was three years old, meaning I started dance classes before I started school.

What was it that got me so hooked? I no longer recall, but it might have had something to do with Angelina Ballerina. A fictitious mouse with a penchant for ballet, Angelina Ballerina was the subject of a series of children’s books by Katherine Holabird. The first was published in 1982, the year after I was born. Angelina is still going strong, with a TV show and a panoply of products that I would probably have killed for, if they had been available when I was in the target age-group. Because, along with Lego and all manner of educational toys, and despite my radical parents’ best efforts, I was in love with everything pink and girly. In short, ballet was to me what crack cocaine is to an addict – and if they’d made crack in pink, I would have been all over it.

As though ballerinas aren’t small and delicate enough, it is telling that this influential character to so many is a mouse – and thus even smaller and more vulnerable. Does a mouse make the perfect ballerina, because the perfect ballerina is a mouse? What does it say about how young girls view themselves and the adults they aspire to become, when so many aspire to pirouette professionally? And the dance itself is so passive. It involves soft movements. Female ballet dancers are lifted off the ground by male dancers, as though they weigh less than a wisp.

I’m not the only one grappling with these issues. Writing at londondance.com, Catherine Hale says: “Ballerinas are not all sylphs and sugar plum fairies. The classical repertoire is full of less-renowned but strong and powerful roles for women like [Ninette] de Valois’ Black Queen. And modern works like William Forsythe’s display a thrusting athleticism that barely acknowledges gender differences. Even in the Giselles and the Coppelias, the technical prowess of the dancing often belies the apparent stereotypes of weak femininity.”

Ballerinas presented an intoxicating image of womanhood. I still remember the hot-pink lust I felt for the tutu

Candace Nast, a 34-year-old ballet teacher from Ontario, Canada, says: “There is no reason why ballet couldn’t be used to tell the stories of women’s suffrage or the sexual revolution.”

But I doubt that a beginners’ class is going to stray into those territories.

For me, at least, ballerinas presented an intoxicating image of womanhood. I still remember the hot-pink lust I felt for the tutu. Along with ballet shoes with ribbons, tutus were purely reserved for examinations and performances. Only the teacher wore one in class, and her assistant, a teenage ballerina-in-training, whom the class looked up to with awe, reverence and envy.

The 2004 French-language film Innocence is set in a creepy boarding school for girls. After arriving in a coffin, the pupils cannot leave or see their families. Ballet is key to school life, and they must prove their ability at the dance to leave. Clumsy students are classed as “caterpillars” to the fleet-of-foot students’ “butterflies”. And successful butterflies are eventually spirited away to what seems to be a breeding camp. Those who try to leave early and are caught are forced to stay in the camp of girls forever. Director Lucile Hadzihalilovic understood that ballet is a powerful symbol for rigid, hetero-normative gender roles – for girls at least.

And that’s without even getting into the many representations of ballerinas as anorexics, who are willing to practice until their feet bleed to look graceful and weightless.

Notwithstanding The Big Ballet troupe, which hails from the Urals in Russia and only accepts dancers weighing over 220 lbs, most people assume ballet dancers are stick-thin, white and female.

Why on earth would I want to go back to it, as a much more evolved adult woman who can see all the pitfalls – and doesn’t even like pink any more? To answer that, I need to tackle my reasons for giving it up. It was not because I didn’t enjoy it any more. Aged 10, it was beginning to occur to me that ballet was not cool. Traditionally-boyish pursuits such as paintball and videogames become cool for everyone. Girlish things, however, are thrown aside by women, and rarely taken up by boys and men.

My anti-ballet instincts became stronger when I was a teenager, and discovered punk-rock. My prior love of dance was at odds with this male-dominated scene. Not that she counts as punk, but just consider Avril Lavigne’s 2002 hit Sk8er Boi. She expressed the boundaries separating a modern Romeo and Juliet like this: “He was a punk, she did ballet. What more can I say?”

Like other reclaimers of things traditionally used to oppress women – from knitting to the word bitch – I am suspicious that something has been lost. Despite achieving a great deal, anything associated with women and girls alone is uncool, unacceptable. Even, on occasion, to feminists.

So I decided to embark on a reclamation project. After 15 years on the wagon, I went back to the barre.

Jumping right back into a pair of ballet shoes and a leotard, however, was daunting. At least some preparation was necessary.

For one thing, my body is no longer that of the springy 10-year-old that last attempted a plié. Sure, I go to the gym once a week, but I’m desk-bound most of the day, and lifting weights and negotiating the treadmill does not necessarily make the best training regime for ballet class.

So I rented the New York City Ballet Workout 2 on DVD, and hit my first stumbling block. It is aimed at men and women who are trying to lose weight. I am not one of them. It is disturbing to discover that ballet is a stick that women beat themselves with in two ways. First, the unrealistic ideas about female body-shape. And second, it is another way for women to try and attain thinness. Is the association too strong to make ballet work as a feminist activity?

Unlike my younger self, my heart no longer skips a beat at the thought of body-fitting Lycra and pink slippers

Nonetheless, the DVD teaches ballet steps. I need a refresher and this is the only one available, so I pop it in the DVD player. Although I feel silly jumping around my living room in trainers, trying to remember fourth position, there’s something reassuringly familiar and calming about the booming voice of ballet master-in-chief Peter Martins telling me to “demi-plié” to classical music.

After a couple of gos with the workout DVD, I’m starting to feel more confident. Confident enough to attend a class.

I do some research on the Internet, and end up picking Pineapple Studios in Covent Garden, London. It is the only studio I can find which doesn’t offer pole-dancing classes. They do, however, offer a host of other, interesting-sounding classes, such as Egyptian dance, rock dance, street-locking and even break-dancing. Steeling myself from getting sidetracked, I ring up and ask what to wear.

This is my biggest worry, betraying the huge shift in my body image. Unlike my younger self, my heart no longer skips a beat at the thought of body-fitting Lycra and pink slippers.

But the woman on the end of the phone reassures me that I can come in whatever feels comfortable. And ballet shoes aren’t compulsory either: socks or bare feet will do just fine.

Once I receive this information, my feelings swing the other way. Suddenly, I am angry. I was once so happy to prance about in a leotard, and it is only the weight of social pressure on adolescent girls and adult women that has changed me. Is ballet the problem, or society’s obsession with a certain body-image?

With this in mind, I brave my first class. I hadn’t expected to feel so nervous, but I do. A couple of other women have already arrived – both about my age. They, however, are already stretching in a competent manner. So, why are they here? “It’s just because I am stuck in the office all week,” says one who has been taking classes since November. She, and all the women I spoke to, had also taken ballet as children and given it up.

Women and men of all ethnicities, shapes and sizes attend the class – although it is mostly white, thinner women in their 20s. Most of the men look more serious than the ladies. Two are wearing leotards, the only ones to be spotted in the room.

Keith Hodiak, the class tutor, is not what I expect. My memories of ballet teachers are of older women in tutus with a ruthless attitude to any misstep. Hodiak, in contrast, bursts into the room wearing tracksuit bottoms and dreads, and he’s no waif. He says: “People come for all sorts of reasons.” For many it is health-related, but he’s had speech therapists and a whole

range of professionals who appreciate the poise and presence that he says comes from learning dance.

Poise and presence are sorely lacking in my performance on the first day, however. I fluff my way through the steps, feeling increasingly like an elephant trying to walk in the footprints of a mouse. Hodiak says: “Give it six months and you’ll see some improvement.” Great, I think.

But then the woman next to me gives me a smile and helps me out by moving in front, so I can watch what she is doing.

And although I don’t get the thrill I remember, of excelling at something physical, after a bit I realise I’m enjoying it. Ribbons and femininity have nothing to do with it: the workout is tough, and I’m sweating more than I ever do at the gym. I couldn’t feel less like a delicate gazelle.

When I was a little girl, I was not particularly physical. Painfully shy, any kind of team sport was horrifying. But I got real pleasure out of dancing, and I wonder whether that’s what I’m tapping into.

So, while ballet remains so problematic, it turns out that it is possible to salvage something from it. But I doubt if it will ever be a feminist pursuit – other than in the sense of being empowered to do anything you want.

Before starting this project, I saw it as something of a novelty. But, after that first day, something odd happens. I want to go back. For the first time in years, I catch myself seriously considering buying a pair of ballet shoes. Next week I might attempt a pirouette.

Photos shared under a Creative Commons license. Photo of the author as a young ballerina by her mother, 1989. Photo of ballet shoes by melalouise.