My angelic sensibilities were offended forever the morning I first caught sight of a bollard-like cock while eating a handful of midget gems. To this day, I can’t even look at a bag without imagining being bludgeoned around the head by a monstrous trouser-snake, before taking it hard from behind.

It was only when they decided to rub the weathered images of wet shaven pussies, tight asses and hard round breasts across my reddening face as a punishment for my involuntary giggling that I realised these spotty vessels of burgeoning testosterone were using these photos to achieve sexual gratification. For three weeks I felt like I’d bathed my eyes in salt water.

Part of my enjoyment arose from the feeling that I was unlawfully intruding onto male territory, extracting pleasure from something that, as an empowered woman, I was not socially or traditionally allowed to enjoy. I found this difficult to reconcile with my feminist beliefs.

Sex is interesting, it’s carnal and in watching others shag we can hone our own techniques, or develop different ways of providing our partners greater pleasure (making us come all the harder). Historically, many ‘celebrity’ feminists have promoted censorship and the banning of pornographic material so vehemently, though, that saying this I feel like I’ve dug up Andrea Dworkin and shat on her face.

Dworkin, a radical US feminist, was one of the most acerbic critics of pornography throughout the 1970s and 1980s. The publication of her book Pornography: men possessing women in 1981 forced people to reassess the cultural implications of porn and linked it with sexual attacks and violence against women. In 2005, the US journalist Ariel Levy offered Female chauvinist pigs: women and the rise of raunch culture, arguing that the behaviour of young women is systematically unravelling the work of our feminist foremothers. With this latest assault, it’s not surprising that pornography continues to be perceived as the last refuge of the male sexual pervert and ill-informed cock-slut who, in her pretensions to empowerment, is ironically consolidating archetypal male oppression at the same time as flashing her muff at anyone holding a camera. 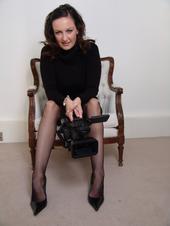 When travelling to Soho in London to meet Span at the headquarters of her production company, Easy On The Eye, I was unsure what to expect. Part of me anticipated a silicon-breasted peroxide blonde, with a head full of big, bleached teeth and a body covered in leather, accompanied by an entourage of camera-clad men willingly telling her she’s in control while watching her flick the bean. But the office, located above swanky West London clothes boutique Bang Bang, looked surprisingly inconspicuous.

Inside, I had expected to be stifled by a montage of explicit photographs of the anus and ball sack, set against a back drop of dirt and grime, but again my perverse thoughts went unrequited and, apart from a notice on the intercom informing patrons that they did not sell sex services, there was nothing to distinguish this office from any other place of work.

But there was no time to dwell, she was about to join me and, as far as I could see, her entourage consisted of little more than two PCs, a sofa and a friendly, 20-something Anglo-American named Mike, who, I later learned, was in charge of sales (and was not, I repeat, not, a gimp). “The best way to tackle derogatory sex and speech,” began Span, “is to reply with positive sex and speech.” She smiles and I am immediately aware that I am dealing with an intelligent, articulate woman: “A few performers have said that working for a woman makes it a very different experience. I think women relax more when they are working with me, but guys have also said that they don’t feel the edge of competition that they do with male directors. We just have a laugh, that’s the main thing on my set. It’s important to be extremely organised when making the film, but at the same time it’s having a good time. The day should be enjoyable.”

Her enthusiasm for her profession is refreshing and, on the basis of that description, you could be forgiven for thinking she spends her days presenting kids TV. A pretty, slim 30-something brunette, the day we meet she’s wearing black jeans, a short-sleeved blue top and lacks the heavily made-up ‘porn face’ that I had expected to see huffing back at me. If you happened to be stood next to her while she fondled the courgettes in the fruit and veg aisle, you would never guess that she spends the best part of the week waiting for furry-chested wannabes to get it up, or, more significantly, that she has become so well-respected in the adult entertainment industry.

“Even guys who are vehemently anti-porn can at least rest assured that their sexuality is respected enough that their needs are being catered for, and women should be able to feel the same way”

Span has good business acumen, a creative spark, and has produced work that has been praised internationally, but her achievements continue to be negated by the stigma attached to female involvement in the porn industry. She’s told she is not a feminist. She’s told she subjugates women. She’s told that what she is doing is wrong. “Occasionally I will meet guys who tell me what it is to be a feminist, which is a little bit grating,” says Span. “You are never going to have one point of view for women, as women are just like men. There are millions of us and we all have different opinions. Many women seem to view feminism as one political party, most of them promoting a left-wing socialist idea of feminism. But it is ridiculous to view feminism as only accessible to those with these ideals, instead of a mode of thought that can be interpreted through Conservative, Labour or Liberal politics. I’m more Liberal. My take on women’s rights are those that advocate individual freedoms and aspirations. You have to move forward and supply positive role models for younger women, instead of promoting negative viewpoints, which I believe emanate largely from a Conservative idea of feminism. I make no apologies for coming from a different political point of view.”

Isn’t it a cliché to assume that a woman has to be convinced the characters on screen love each other before they bump uglies?

“Different film-makers make different films,” continues Span, “I’m not that emotional. I’m more preoccupied with representing the enjoyment aspect of sex rather than anything else. I see feelings as being something that can be discussed afterwards. Candida Royalle puts her politics forward at the start of her films and I said I wouldn’t do that. She places a female protagonist at the front of the screen, a woman who is going through some sort of right of passage. She is sexually inhibited and through the course of the film she meets a guy and begins to explore her own body. I think we needed to see that progression on screen during the 1980s, as this was a very new concept and, arguably, Royalle doesn’t do it so much now, but at present I think the female audience has already experienced some form of transformation and needs to be treated as equals. Even if the storylines are not realistic, women are provided with images and role models, allowing them to fantasise and dream.” 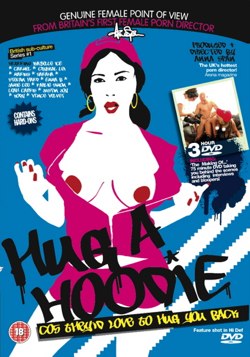 But what fuelled this assumption that women can only get off on the written word? Denying that women like watching one another get laid by attractive men allowed the industry to justify the reasons why they did not cater for a female audience, at the same time allowing the maintenance of the stifling beliefs that women are fundamentally passive in the bedroom, having sex forced upon them rather than it being something they take a proactive role in. Perhaps during heterosexual intercourse a man likes to feel that he has corrupted his partner, being the only object of her fantasies and the sole provider of her sexual gratification. Men have been conditioned to uphold this as part of the status quo. For a woman to watch porn, and additionally if she makes herself climax solo, represents an independence that unnervingly disempowers men, which is why there is a reluctance to accept it.

What Span determined when researching how men and women react to sex on screen was that she needed to change the emphasis when filming for women: “When I was doing interviews with men I found that they could provide great detail about what sort of woman they fancied physically, but when I asked them what she was wearing, or where they were, they tended to lack imagination. I found that women can describe a whole environment, paying attention to clothes and décor. I have a friend who had a fantasy about being the first course of a meal – in a sexual sense – at a banquet. She imagined herself dressed in old English clothing, and could tell me all the details of her fantasy right down to the colour of the curtains in the room,” Span laughs: “It’s just a fundamentally different way of looking at porn, and therefore it’s much more difficult to make films for women. It’s a lot more expensive, and it’s not enough to just have a good-looking guy, he must also have personality, because if he opens his mouth and he’s a fool then no-one’s interested.”

If you wish to find out more information about Anna Span, her work, and Easy on the Eye productions, she will have a stall at The Adults Only Show in Birmingham NIA on the 5th – 7th October 2007, and will be appearing at Erotica in The Olympia Grand Hall in London on the 23rd – 25th November 2007.