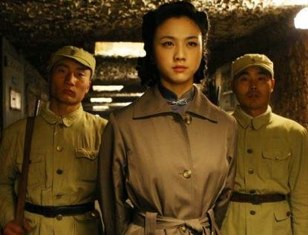 Ang Lee’s latest epic, Lust, Caution is a stunning but gut-churning piece of cinema that had me up wondering about it well into the night.

This film – based on Eileen Chang’s short story of the same name – tells the story of a young female student radical by the name of Wong Chia Chi, living in Japanese occupied China. Masquerading as Wang Jiazhi, the young wife of a fictional businessman, she begins passionate affair with Mr Yee, a high standing Chinese official and Japanese collaborator. The aim is to entrap him and eventually lure him to his death at the hands of her fellow resistance members. At the last minute, however, she bottles out and lets him know about the plot, allowing him to escape. She and the members of her cell are subsequently interrogated and executed by Mr Yee’s associates.

I think the most worrying thing about the story from a feminist perspective is the idea that, as a woman, Wong is ultimately unable to separate sex from love and equally unable to put her radical politics before her love for Mr Yee. He, on the other hand, manages to order her execution just fine.

Although Wong always has the upper hand in their relationship, in the sense that Mr Yee is not aware of her part in the plot against him, he is still able to control her. Their passionate and often brutal lovemaking leaves her confused and unsure as to whether the deep connection they share in bed is something that has real value. He gets into her head, to the point where she feels compelled to sacrifice her own life and the life of her fellow resistance members in order to save his.

However, the moment she realises that she cannot send her lover to his death comes not as they have sex, but as he presents her with a giant ‘quail’s egg’ of a diamond ring. As a wealthy man who has probably gone through several mistresses the purchase of such a ring may not be as meaningful an act as it seems, yet Wong sees it as final proof that he is in deeply in love with her. Wong is portrayed throughout as a complex woman and it disturbed me that the act that prompts her to save her lover’s life is the purchase of that most clichéd trinket: the diamond ring.

Once her betrayal becomes apparent, Wong is quickly executed. A passage from the original short story illustrates Mr Yee’s disturbing state of mind after her execution has been carried out: “And now he possessed her utterly, primitively – as a hunter does his quarry, a tiger his kill. Alive, her body belonged to him; dead, she was his ghost.” By dying she becomes permanently his, her ghost a diamond-like treasure for him to keep.

I found myself asking whether the ending would have been the same had Wong been a man? I doubt it. Of course, in such a political climate and at that point in time I doubt any woman could have been in a similar position to Mr Yee and so this reversal of roles is entirely hypothetical. However, the film seemed to be suggesting that men are entirely capable of suppressing their feelings for the sake of politics. For example Kuang, a fellow resistance member, is clearly in love with Wong and yet feels able to send her to bed with his friend Liang, a frequent user of prostitutes, in order that she should learn how to have sex before being offered to Mr Yee as a mistress.

In moving scene later on, Wong all but breaks down in front of Kuang and a more senior member of the resistance and attempts to explain how painful it is for her to have sex with Mr Yee never knowing when the affair is to end or when the resistance will step in and put an end to her double life. Rather than comforting her, or even acknowledging the difficulty of her situation, they simply let her cry and make sure she knows that blowing her cover is not an option and that she must see the whole thing through to its conclusion.

What left me feeling profoundly sad was this willingness to offer up Wong’s mind and body for the sake of a cause. Ang Lee’s dramatisation of the story is beautifully told and acted and I am not arguing for a different ending. For me the inevitability of Wong’s fate perfectly captured the notion that men are always able to see the bigger picture, whereas women are doomed to forever focus on emotional affairs to the detriment of themselves or others.

The final moments of the film only emphasise Wong’s acceptance of her role as a cog in a male-dominated system. In the end, she surely knows what her fate will be and yet she chooses to offer up her life to Mr Yee, allowing him to possess her completely in a way that would have been impossible while she was still alive. I left the film with the haunting image of Mr Yee, sitting in Wong’s deserted room, mourning a loss of which he would never speak, ensuring that his lover would cease to exist anywhere outside of his own memories.