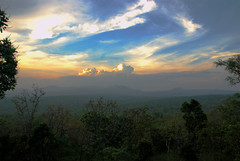 Women cannot claim land rights under a law meant to grant deeds to tribal people living in India’s forests, according to Women’s eNews.

The point of the legislation is to give tribal peoples formal, legal rights over forest land occupied for generations, protecting against the forestry industry and other threats. But, Aparna Pallavi reports, the Forest Rights Law “only provides for the issuance of deeds to single men or married couples. It is silent about the rights of single women, whether widowed, deserted or not yet married”.

[Forest rights activist Pushpa] Toppo says this is actually a step backward for women in tribes where custom requires their husbands to give them a share of land for independent control. When a man has more than one wife, some tribes require him to provide a plot of land to each for her sustenance.

“We had expected that a legislation that talks about rights of forest-dwellers would strengthen such positive customary practices where they exist,” says Toppo. “On the ground, however, this act does not recognize these practices at all, and women are left with no space to exercise their rights under them.”

Soma KP, who has abbreviated her last name, is a researcher of women’s land rights from Delhi and she agrees. “Previous experience shows that unless they are explicitly stated, women’s land rights–both in paternal and marital homes–tend to get invisible.”

It really is mind-boggling how a law written in 2006 could give land rights to men, but not to women; not to mention when it’s a law meant to protect the rights of tribal peoples whose own systems recognise women’s land ownership.

(A side-note: it’s interesting to me that two people quoted in the feature have changed their last name – Soma KP, although there is no description of why, and Roma, described as “a land rights activist who has dropped her caste-based surname and goes by a neutral single name”.

The debate about patriarchal last-names is often framed as a bit of a luxury for Anglophone feminists in the West, but perhaps that is a misnomer? I’m not sure – Roma changed her name as a rejection of the caste system, and we don’t know why Soma shortened hers, but it’s interesting that this is political territory.

This post on Ultra Violet seems to cover identical ground to many debates we have had here at The F-Word, as does this post at Unmana’s Words.)

Photo by code_martial, shared under a Creative Commons license