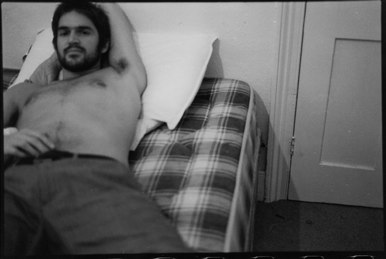 “Why do so many female artists put themselves in their work – often with no clothes on?” asked an article in The Guardian by Germaine Greer at the beginning of the year.

I have been photographing men for the last six months and I think I have the answer. The project ‘Asking For It’, showing at Ladyfest London in May, involves me approaching men in public places and asking them to fully or partially undress in a more private space for me and my camera. During this time I have grappled with going against the grain: with being something other than object.

Greer gives only one reason why female artists do not put other people’s flesh – either male or female – in their work: “That the use of the nude is necessarily exploitative, and therefore a female artist who needs to use a body has no option but to use her own.” Noble indeed, but our collective female conscience fails to kick in when we “exploit” other women, children, male adolescents – and of course ourselves. One example is Vanessa Beecroft whose work shows rows of nubile naked young women – with shorn, partially shorn or closely cropped pubic hair – wearing only heels and red wigs.

Unlike men in the same line of photographic work, she allows the man in front of her camera to dictate his own sexuality. She fights for his sexual liberation from strict stereotypes of masculinity, but leaves little room for an exploration of her own desires

It seems that for the last 20 years our discomfort around exploitation has only manifested itself when we consider exploiting men. Women who use men in their images today do so with great deference. There seems to be a treaty among female artists who tackle men that says ‘treat men how you’d like to be treated by them’. Collier Schorr has buoyed up masculinity by photographing Rodeo men and wrestlers revelling in their strength, their egos massaged by her camera. There is no sign of condemnation for a system of sexism that feeds itself by demonstrating male strength and female weakness: she photographs men wrestling, while most male and female photographers snap at female waifs looking away in blank-eyed submission.

Women photographing men put the man in the picture first and themselves last – an age-old tradition of femininity. Julie Cooke, a member of the same Arts Council-supported development programme as me at ‘Four Corners’, photographs male burlesque performers. Unlike men in the same line of photographic work, she allows the man in front of her camera to dictate his own sexuality. She fights for his sexual liberation from strict stereotypes of masculinity, but leaves little room for an exploration of her own desires. Show me the man who would do the same for a woman and that would be original – but don’t hold your breath ­­­­­­­- men failed to sign up to the ‘do unto others’ code.

The recent Antoine d’Agate exhibition at the Photographer’s Gallery was a collection of four years’ worth of photos. The images are full of men taking women from behind, men abusing women, women looking abused or as defiant as a prostitute trying to believe herself in control. There was female nudity spattered all over the exhibition; the closest we got to male nudity was an image of a man with his top off getting himself off – a theme of the exhibition – but this time on drugs.

Young men are still less powerful than grown women. Asking an older male stranger to sit still while I look at him, just look, asking him to take off his trousers or undo his belt, asking him to do what I want, is frightening

When women do sexualise, objectify and explore their own sexuality, they are more comfortable with women or adolescent boys. Ellen von Unwerth’s pictures of sexy-looking women and the occasional teenage boy are a case in point. Collier Schorr also photographed adolescent boys looking sexy. Why didn’t these women choose sex objects their own age? These women are trying to break out of the deadlock of female submission and self-objectification – the psychological phenomenon that says I’ll recreate what I’ve always known because it’s familiar and sickeningly comforting. While they are breaking out of that self-objectification by tackling others – women, children and adolescents – they are shying away from tackling grown men. And this suggests inequality. If grown men are able to photograph grown women without bowing down to them first, surely the reverse should be possible. But it is not yet – at least not without taking great risks.

Having photographed men my own age – and occasionally photographed them looking sexy (though this isn’t my focus) – I’d say any woman tackling women or adolescents instead of men is making a choice based on power. Young men are still less powerful than grown women. Asking an older male stranger to sit still while I look at him, just look, asking him to take off his trousers or undo his belt, asking him to do what I want, is frightening. Where’s the security? Who will defend me against him? I have ‘only’ myself to rely on. The risk of this is lessened by the immaturity and slightness of a younger model. It is eliminated by putting only yourself in your artwork.

I don’t use myself in my artwork and I don’t photograph young boys, but I have been pulled by the safety of flirtation and giving up a certain amount of direction and control. I’ve given power back to the man in the picture by allowing him freedom in front of the camera and cursed myself afterwards.

So what happens if I not only leave the realm of object, if I focus on men but I’m not deferential, submissive or flirtatious either?

I’m constantly aware of an underlying threat of anger and violence when a grown man’s status (above women) is challenged. Deference and submissiveness feel like survival tactics. I worked for some time on the National Domestic Violence Helpline and for many of those women staying silent, submitting to control, was the only way to avoid violence – but it was only ever momentary relief. The violence always re-emerged.

This is no conclusion. This is just accepting powerlessness around men and using survival tactics to get through it – submission or avoidance. Where’s the liberation in walking on eggshells? Where’s the empowerment in feeling equal only to adolescent boys and women?

So what happens if I not only leave the realm of object, if I focus on men but I’m not deferential, submissive or flirtatious either? I have stopped walking on eggshells as much as I can bear to. I follow my fear into situations of potential male violence and disapproval: situations where passivity, acquiescence and submission feel safer or more appealing than taking control. I take note. I use poems and texts as much as image to get my message across. Photography simply forces me into a situation and allows me to document and record it. It allows me to experiment with myself and with feminist ideas.

It feels like suicide at times. The reasons to do this project seemed glaringly obvious when I began, but slowly the reasons not to do it have begun to hit me in the face too. I have been warned off it by many a family member, friend and even by the men I’ve photographed. They site the risk of violence, they site all sorts of other things too: a damaged reputation, ostracisation. They say I am ‘asking for it’ which is exactly what the legal system says about women who’ve been raped if she has so much as looked at the man in question. The threat of violence is a real control on us. It perpetuates sexism. It can stop us in our tracks. But submission is the real suicide mission.

To be treated as an equal I need to say what I want, express all the things I feel about men, even if some are critical, do what I want, and above all stop walking on eggshells and start tackling men

I’ve started self-defence classes. I’ve started to attempt to build some muscle. I’ve stopped wearing little shoes preferring big heavy toes (better for kicking and running). I’ve stopped wearing skirts (too easy to access), stopped wearing earrings (too easy to rip my skin). And started wondering why I would ever have worn those things when rapes are so frequent and conviction rates so low. Did I really feel so safe, or did it feel safer to solicit temporary male protection (for as long as I managed to please him with my sweet girly way of looking up to him), forgetting that that protection is linked to inferiority and so often turns into rape or domestic violence later.

My reticence about portraying men in a challenging way comes down to my perceived lack of real individual power in a society that does everything to limit it – from threats of male violence to diets, heels and lower pay. There is a long history – male just as much as female – of avoiding overt criticism of those in power. And if nothing else, compared with women, men are certainly in power right now. Apart from the sycophantic images of the rich, artists have always used the victims of our society as their models – from Walter Sickert’s prostitutes to Tierney Gearon’s children.

To tackle men head on still feels like suicide because it is suicide in a society where I am are seen as inferior and struggle not to believe it myself. It is suicide in a society that doesn’t punish violent crimes against women, but instead tells me to control my movements, stay indoors, watch my step and, above all, avoid male anger – to act nice and submissive.

But every time a woman believes she’s safer with her arse in the air, eyes averted and head inclined, she’s making a fatal mistake. She’s just putting the moment of violence off and increasing its intensity. She’s digging a deeper grave. Submission has not made women safer. It’s just taken it out of the public sphere and pushed it behind closed doors.

To be treated as an equal I need to say what I want, express all the things I feel about men, even if some are critical, do what I want, and above all stop walking on eggshells and start tackling men. All that and accept – welcome – his disapproval and anger because it means I’m finding something out about him. I’m finding out if he wants a human or an object. And when I don’t get control, disapproval and anger I know I’ve found equality.

Alex Brew is a photographer and writer. Her ‘Asking For It’ project will be shown at the Islington Arts Factory as part of Ladyfest Londom, from 9-11 May 2008. View her work here