“Are you a breast or a leg man?” – some thoughts on feminism and vegetarianism 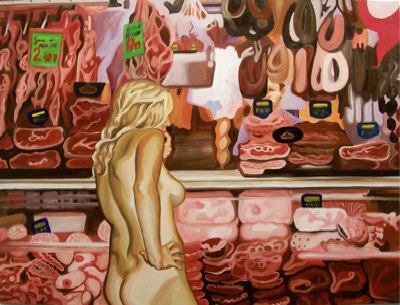 It isn’t an unusual story: feminist/woman produces significant work. World tunes in for five minutes. Theory is forgotten, and next generation has to learn it all over again.

However, I think it’s still an appropriate point to make about The Sexual Politics of Meat by Carol J Adams. The book and the argument it makes, which is broadly an analysis of why being vegetarian is a feminist choice, has not in my view permeated deeply into our culture, or even within vegetarian circles, if my experience is anything to go on. While I was reading this book, as happens, I was asked quite a few times to explain why it is feminist to stop eating animal products; and not just by meat-and-two veg types, but also by curious vegetarian feminists.

(Note, if you are an ardent meat-eater, you may not want to carry on reading, as I am addressing this post directly to vegetarian and vegan readers, and I am coming from the perspective of a committed vegetarian. I doubt that the book is one which will convert hordes of omnivores, but I would say it could give a new understanding and insight to vegetarian feminists.)

The preface begins with this sentence, which sums up exactly my own feelings prior to reading the book, 18 years after it was first published and eight years since I began my current stint of vegetarianism: “My becoming a vegetarian had seemingly little relationship to my feminism – or so I thought.”

However, the argument put forward is deeply convincing. It is not simple to sum up in a paragraph (relying heavily on a theoretical construct called the “absent referent“). My clumsy attempt would be to say that the objectification of animals (into meat) is the same process as the objectification of women (into sexual body parts); the two reinforce each other, and not taking part in the meat culture can, for some, be feminist activism. Well, there is a lot more to it, but I would suggest reading the book yourself to understand the nuances. Indeed, although it is heavy-going theory for the most part, I would certainly recommend the book to anyone who is curious about the whys and hows of the connection between the oppression of women and killing and eating of animals.

Above and beyond this, though, the book provides heartening reading for the feminist vegetarian. If it gave me an explanation of how vegetarianism can be feminist, it also provided a much needed insight into some other issues. First off, why it is that so many meat-eaters insist on abruptly questioning why you are vegetarian at the dinner table, often while they are chowing down on some dead animals and you are not, and what do you do about it? Well, Adams suggests that this is not the time for a real conversation on the ethics of meat eating:

In a situation where flesh is consumed, vegetarians inevitably call attention to themselves. They have made something absent on their plates; perhaps a verbal demurral has been required as well. They then are drawn into a discussion regarding their vegetarianism. Frequently, there will be someone present who actually feels hostile to vegetarianism and regards it as a personal challenge. If this is the case, all sorts of outrageous issues are thrown out to see how the vegetarian will handle them. The vegetarian, enthusiastic reformer, sees the opportunity as one of education; but it is not. Instead it is a teasing game of manipulation.

Unfortunately, Adams doesn’t have any tips on how to turn this situation around: only that it is basically impossible to win these arguments when everyone is sat around eating meat, and therefore better not to engage.

Because I am a former English Lit student, I also thoroughly enjoyed the vegetarian analysis of Frankenstein. Because I like work which uncovers bias in traditional histories, I enjoyed Adams’ sketch of vegetarianism in women’s history and feminist history.

I was particularly struck by the case of the “chlorotic girls” of the late 19th century. Adams suggests that girls’ decisions not to eat meat were medicalised. They were diagnosed which ‘chlorosis’ (a type of anemia), and suspected fear of their own sexuality, erasing what could easily have been a reasoned choice in favour of vegetarianism.

It is also interesting to read how 19th century women “saw vegetarianism as liberating them from cooking fatty foods and labouring over a hot stoke”, and, because it was seen as a healthier choice, liberating them from the job of looking after men and children made sick from a poor diet as well.

The book tackles the controversial figure of Sylvester Graham – his legacy is an odd one, because he popularised vegetarianism (or ‘Grahamism’), but he had a dodgy theory about men abstaining from meat in order to quell their libido. From a modern perspective, in particular, this is silly – of course, it has no such effect, although the constant framing of meat as somehow “manly” or “macho” would suggest that some hang on to this belief. However, Adams explains why in the context of the time, in the absence of reliable contraception, and when many women were constantly pregnant as a result, this was an ineffectual but ultimately feminist attitude:

Grahamism offered a promise of liberation and implied that control of sexuality could be placed in women’s hands. Not only did many vegetarian leaders endorse birth control and abortion; some also advocated that women had a right to enjoy sex.

Hardly a revolutionary thought these days, but important in the context of the 19th century.

Looking at a more modern times, Adams makes some interesting points about how meat eating is equated with, and connected to, masculinity. And she also tackles what you might call the PETA issue – why it is wildly offensive to use women’s exploitation to make a point about animal rights. More controversially, perhaps, she argues out that it is wrong to “appropriate” the suffering of animals to describe violence towards women (saying “she was butchered” for example). “In constructing stories about violence against women, feminists have drawn on the same set of cultural images as their oppressors.” – An argument that Adams illustrates with a lengthy description of some of the many ways that misogynist images hinge on describing women as meat:

Images of butchering suffuse patriarchal culture. A steakhouse in New Jersey was called ‘Adams Rib’. Who do they think they were eating? The Hustler, prior to its incarnation as a pornographic magazine, was a Cleveland restaurant whose menu presented a woman’s buttocks on the cover and proclaimed, “We serve the best meat in town!” Who? A woman is shown being ground up in a meat grinder as Hustler magazine proclaims: “Last all meat issue”. Women’s buttocks are stamped as ‘Choice Cuts’ on an album cover…

However convincing you find all this, the book is certainly an interesting read for vegetarians out there.