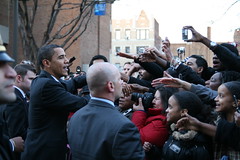 I guess it won’t have passed you all by that US presidential hopeful Barack Obama took the unwise PR decision to fob off a female reporter with the phrase “Hold on one second, sweetie”. The reaction has been unsurprising – he has apologised and described it as a “bad habit”, insisting he “meant no disrespect”, she responded saying she “had been called worse”.

I’m the last person who wants a big fuss made about one teeny little unscripted word. And a part of my head is warning me not to say anything on the subject in case I hear myself being quoted on Fox News in a special “International Reaction To Obama’s Career-Ending Insult”. First of all remember Mr Obama is likely to be standing for election against John McCain – a man whose election would undoubtedly see US gender equality sent packing back to the dark ages. This is a man who voted AGAINST the equal pay act. This is a man who has openly said he thinks Roe vs Wade should be overturned. Obama is undoubtedly the more woman-friendly candidate.

However it does really annoy me when guys I’m dealing with professionally call me sweetie or darling or love or pet or other patronising terms of endearment? Of course I don’t mind, in fact I quite like some cute nick-names from my boyfriend or really close friends. But I often stop people and ask them not to use the term.

Of course I only make a fuss when it’s not going to affect my career – it would be professional suicide not to be a bit thick-skinned from time to time. But I do object to it regularly from shop-keepers, tradesmen, taxi drivers, those kinds of people. And the reaction varies – of course every individual is different:

1) Some (very few, mostly shop-keepers while the money is still in my hand!) apologise. One even said “sorry darling”!?

2) Some try to engage with me in a discussion about feminism, usually with an opening gambit like “oh, so you’re one of them are you”. And usually end up going on about Heather Mills and women receiving large divorce payouts resulting in giving the rest of us “a bad name”, and things having “gone too far”, or potentially about how there’s a “girl in our office who doesn’t mind it at all”.

3) Some argue it. I’ve been told – less politely than this – that I should put up with it because it’s either (a) a traditional local term, (b) a traditional working class term. To which I can only respond that if we insisted on sticking to traditions at the expense of all else we’d have to bring back witch-dunking and burning heathens at the stake.

4) Some really make a fuss. I’ve been spat at, called “lesbian” and “dyke” (not of course insults in my world, but clearly intended as such) and “bitch”, etc. One guy went out in to the street and loudly told his colleague that I was “one of those uptight cows”.

On the other hand I was on a train the other day and they guy in front of me called the woman behind the buffet car counter “sweetheart” – she asked him not to to which he responded that women like being called sweetheart. So I unexpectedly chipped in and said “No they don’t” and he skulked off looking miserable and she and I had a good laugh about it.

I consider correcting people who address women with these patronising terms a cumulative act of feminism. Each individual time makes very little difference but if we all do it whenever we reasonably can, we will make a difference. Please add a comment if you’ve corrected someone recently and let me know what happened!

Photo by Graciepoo, shared under a creative commons license.