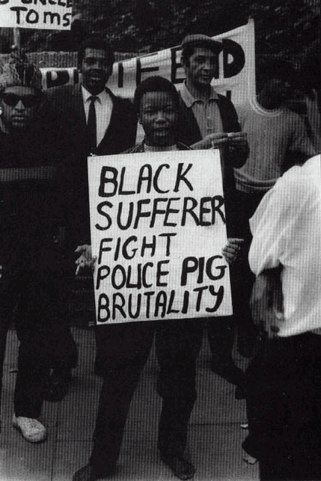 Olive would have told me to shut up and do something

It began with a photograph. A picture without colour, of a lone Black girl, barefoot, holding a placard that read: “Black sufferer fight police pig brutality”. A Black girl who came before the words and aesthetics of Black resistance became commodified for white, middle-class audiences via mainstream pop and HBO, before anti-racist politics became institutionalised in ivory towers and non-governmental organisations.

It began with the empassioned vision of London-based Uruguyan artist Ana Laura Lopez de la Torre who, in conjunction Liz Obi – a prominent community activist and friend of Morris’, created a project that will encompass the creation of public archive, training for volunteers and public events that celebrate Morris’ life and the significance that remembering figures like her has for contemporary Black feminism in the United Kingdom. Obi holds the only living archive of memorabilia and historical artefacts that document Morris’s activist work in the UK.

I came to the UK in October. It took me an extra month to obtain a visa, because of new immigration and citizenship laws that have been instituted since the London bombing of 2005. I came with a deep sense of dread that this place, like the rest of the Western world, seems to be beset with a mind-numbing paranoia towards ‘terrorism’ which is used to manage all forms of dissent. I stood in the city five months ago and watched myself being watched through the eyes of the CCTV. I noticed slight changes since I was last here in 2002. The off-licenses once run by tired looking Pakistani people were now being run by tired looking Turkish people. The toilets once cleaned by exploited (and should be grateful to be) African women, were now being cleaned by exploited (and should be grateful to be) eastern European women. I felt a sense of deep cynicism grow in me. I remembered marching in 2002, like countless others, to protest the imperialist invasion of Iraq, only to turn on the television the next day and see bombs drop. I remembered walking through the museums of England, seeing the trophies of colonisation splayed out like the carcasses of a proud hunter. I remembered the sick jokes and bitter ironies that were used to manage the deep melancholia that comes to haunt a place so steeped in histories of violence and genocide, yet so determined to see itself as civilised and just.

And then, there were these photographs. These grainy black and white photos of a girl, a Black girl, who didn’t look angry as much as she looked cocky. A girl who, pardon the expression, looked like she had some balls. In her face, I saw something that is often not spoken of outside of the trite speeches of politicians and the sanctimonious sermons of preachers – I saw hope.

Olive Morris was a key figure in Black British and Black British feminist history. A member of the Brixton Black Panthers, she also founded the Brixton Black Women’s Group, was a founding member of Organisation of Women of Asian and African Descent and was at the forefront of London-based squatter movements in the 1970s. Olive Morris was an activist whose name and face have all but been forgotten in a time in which ‘activism’ has become synonymous with the faces and names of young white university educated men whose resistance is often fashioned out of a mixture of narcissistic lifestyle choices and high-brow political theory.

Since becoming an intern with the Do you remember Olive Morris? project, working closely with Ana Laura Lopez de la Torre in chronicling and cataloguing her ongoing work, and becoming a part of the Remembering Olive Collective, a volunteer-run group that is working to preserve the histories of Morris and other Black British feminists, I have been both shocked and inspired. Shocked by how Black British and specifically Black British feminist history in this country is invisible. I have had countless conversations with people born and raised in this country – Black, white, Asian and everything in between – who have no idea that the British Black Panthers existed. I have had countless conversations with people who could spit out lyrics from American hip hop ad nauseum but have never heard of Olive Morris or Claudia Jones. I have had countless conversations with people who look a bit bored by all of this, and just want to talk to you about the latest hipster bar in Shoreditch or the latest diet tips that Jamie Oliver has on offer.

We gather breath and strength from all that was possible in the time that Olive organised and protested and stirred shit up, and all that still remains possible today

I have also been deeply inspired by the work of the women who are part of the Remembering Olive Collective. Women who come from India, North America, Latin America, Africa, the Caribbean, Asia and the UK, who meet monthly in Brixton to honour the life and spirit of Olive Morris through a continuous will for change. Women who somehow find child care, get the night off work, call in sick, finally get their visa issues sorted out, so that they can make it to Brixton and talk about intangible and beautiful ideas like justice, solidarity and revolution.

These efforts to preserve history are about more than nostalgia. The Oxford English Dictionary defines nostalgia as: “1. A bittersweet longing for things, persons, or situations of the past. 2.The condition of being homesick; homesickness.” Nostalgia often involves a fixation on a romanticised version of the past that is both derived from and helps to foster a deep lack of unease with one’s current situation. One could argue that the effort to remember the life and work of Morris comes out of the malaise of late capitalism, that fixating on the lives of past revolutionaries is a way of failing to engage with the contemporary world and its litany of problems and struggles. However, I think that the work of the Do You remember Olive Morris? project and the Remembering Olive Collective could not be farther from melancholic or nostalgic.

If you come to our meetings, if you meet Ana Laura Lopes de la Torre, Liz Obi and the other women who are part of this project, you begin to see that they are not drawn to Morris in grief but out of inspiration. This photo of a young girl, a young Black girl in Brixton whom so many of us involved in this project never met, has become something like a mirror. A figure of defiance and passion that all who are involved in the project perhaps see or would like to see little pieces of ourselves reflected in. The OED defines “inspiration” as:

1.the act of inhaling; the drawing in of air (or other gases) as in breathing 2.arousing to a particular emotion or action 3.a product of your creative thinking and work 4. a special influence of a divinity on the minds of human beings 5.a sudden intuition as part of solving a problem 6.arousal of the mind to special unusual activity or creativity.

Perhaps this photo of Olive Morris, this story of a young girl who, by all official accounts and numbers should have been disempowered, should not have had the strength to fight, is like a breath of fresh air. We breathe in stories of resistance, of solidarity, of sisterhood in all the best strategic uses of the word, and then we exhale. We gather breath and strength from all that was possible in the time that Olive organised and protested and stirred shit up, and all that still remains possible today.

I was born in 1979, the year that Olive Morris died. At the time of her death, Morris was only a few years younger than I am today. I am ‘Asian’ (the official term in North America is ‘South Asian’, although my parents would call themselves Indian and a lot of ‘South Asians’ in the diaspora would say Brown or Desi).

Olive Morris was Black. She was born in Jamaica and, when she migrated to England as a child, other terms, like Afro Caribbean, African, Black British, might also have been used. It’s funny that I have an immediate will to categorise Morris’s body and my own. To place us within the neat, succinct state-led boxes that separate bodies, that classify and count people. In the contemporary UK the language of difference, the categorisations of non-white bodies has become complex. Fill out any job application, apply for any grant, and you will be met with a litany of categories – British Asian-Indian, British Asian Bangladeshi, African, Black British, Mixed race-Black, Mixed race-Indian, and on and on and on. Some would argue that this specificity has come about from the demands of various communities that wish to be recognised for their regional, linguistic, religious difference. Others would argue that the breaking up of a unified “Black” British identity that defined Olive Morris’s generation and categorized all non-white subjects as “Black” erodes possible solidarities between differently racialised bodies.

I find myself wondering why I, a brown woman from India, who immigrated to Canada and now finds herself in the UK was drawn towards Olive Morris. I find myself wondering if in an era in which Blackness has become co-opted as an empty fashionable signifier while Black women continue to be the poorest and most politically under-represented people in the world, if I have any right to be involved in a project about Morris’ life. I find myself laughing at all this heady introspection, thinking that someone like Olive Morris, who was a grassroots activist, feminist, Black Panther, squatter and internationalist would have probably just told me to shut up and do something.