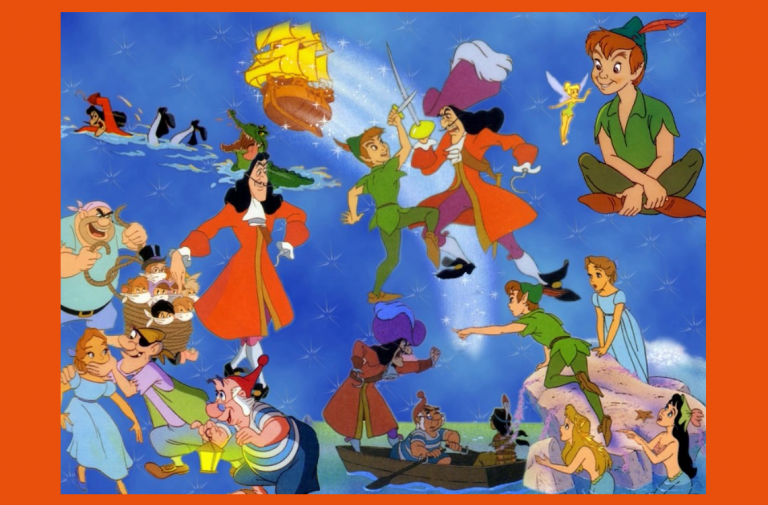 In a world rife with contradictions, here’s one that still surprises me: I’m a feminist with a not-so-secret penchant for the many media adaptations of Peter Pan. The first movie I remember seeing in theaters was a revival of the 1953 Walt Disney cartoon Peter Pan. A few years later, when I was old enough to read, my dad gave me an illustrated edition of the book. The book’s spine is now held together with tape, but I doubt I’ll ever give this book away. Until December 2008, however, I hadn’t seen any theatrical productions of Peter Pan.

After a recent trip to London, in which I was fortunate enough to research the history of the original play at V&A Museum archives in South Kensington, I learned first-hand about JM Barrie’s behind-the-scenes work with this play. The show’s first production, performed on 27 December 1904 at Duke of York’s Theatre, was rife with racist stereotypes of indigenous people and sexist stereotypes of female characters such as Tiger Lily, Tinkerbell and Wendy Darling, but the play also spawned a lasting public interest in this fictional character’s adventures. Fortunately, the offensive aspects of Barrie’s story have been addressed in a new generation’s transformation of the story: PJ Hogan’s 2003 hit film Pan advances the story towards an equality-based interpretation of this timeless children’s tale through a more complex, sensitive portrayal of issues related to race and gender.

The original working title of the play was The Great White Father, a somewhat satirical reference to both Peter’s masculinity and perceived racial ‘superiority’

The theatrical production of Barrie’s Peter Pan dates back to the earliest part of the 20th century. Inspired by a young British family he met while strolling through Kensington Gardens, playwright James Matthew Barrie invented the children’s world of Never Land, a fantasy locale inhabited by orphan children (Lost Boys), mermaids and nefarious pirates.

The title character plays into traditional ideas of masculinity: Peter is cocky, stubborn, charismatic and enigmatic to the women in his life: Wendy Darling, a prepubescent English girl whose father wants to remove her from the nursery she shares with her brothers; the fairy Tinkerbell, who often vacillates between ignoring and threatening Wendy; a coven of mermaids with inexplicable crushes on a teenage boy; and Tiger Lily (more on her later).

All of the women share unrequited attractions to Peter, their emotions trapped in a limited range between jealousy of one another and mute longing for Peter.

Peter ultimately lures young Wendy Darling to Never Land with a plea that he and the Lost Boys lack a mother. ‘Mother’, in this case, is defined as one who “darns socks”, does the “spring cleaning”, “tells stories” and pines for ‘Father’ Peter. By the end of the play, Peter rejects the self-imposed role of fatherhood, making it clear to Wendy that he has tired of their extended game of House. “What are your exact feelings for me?” Wendy asks. His answer: “Those of a devoted son.” This pivotal moment of rejection, in which neither Wendy nor Peter are able to articulate their romantic feelings, symbolizes Wendy’s ascension into her own maturity: she and her brothers leave Never Land. Off-stage, Wendy “grows up” by marrying and giving birth to Jane, a daughter who will, like her mother, follow Peter to Never Land for his spring cleaning.

Much of the play’s assumptions regarding gender essentialism are in line with Victorian attitudes on women’s roles. However, Barrie did break convention with his request that the role of Peter be played by a girl. According to Bruce K. Hanson, author of the book The Peter Pan Chronicles: The Nearly 100 Year History of the Boy Who Wouldn’t Grow Up, Barrie wanted a female lead because adults were more commonly hired as actors as children (thus making it difficult to hire a young boy for the part) and Barrie wanted the audience to immediately identify the boy’s pre-puberty youth. Pauline Chase, the British actress who popularised the role in 1904, even published a series of letters sent to her by fans of the show. In stage productions around the world, this convention continues, a testimony to the power of gender nonconformity. Wendy’s attraction to a female Peter also makes for an interesting subtext to a play loaded with Victorian ideals of gender roles and heteronormativity. 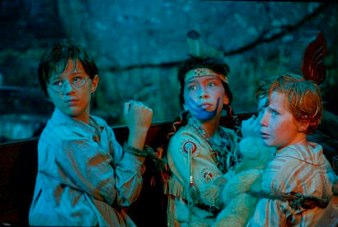 History shows that Barrie was woefully willing to perpetuate racist stereotypes. His original working title for the play was The Great White Father, a somewhat satirical reference to both Peter’s masculinity and perceived racial ‘superiority’, which was fortunately rejected by Barrie’s producer, Charles Frohmann. Yet Frohmann took no issue with Barrie’s use of the term “redskin” as a reference to indigenous populations. Though Barrie was not a US citizen, he borrowed the term from a historically racist US lexicon; his depictions of indigenous characters repeatedly describe the “savage” behavior of an apparently war-bent tribe out to kill small white children (the Lost Boys) who are accused of kidnapping the Chief’s daughter, Tiger Lily. Tiger Lily’s role in the original production situates her character as the ethnic Other, a damsel-in-distress with virtually no lines who briefly distracts Peter’s attention away from the play’s white heroine, Wendy.

PJ Hogan’s 2003 film adaptation of Peter Pan breaks with the racist and gender-essentialism of Barrie’s play. Tinkerbell and the mermaids’ murderous jealousy of Wendy is downplayed, eliminating the ‘catfight’ scenario which infiltrates many of the story’s adaptations. The romance between Peter and Wendy is far more developed than in previous adaptations. In the film’s most welcome change, the role of Tiger Lily is played by Iroquois actress Carsen Gray, whose interpretation of a defiant young woman who refuses to betray the whereabouts of Peter Pan’s lair to Captain Hook is a far cry from the way her part is written in Barrie’s play. Tiger Lily even does some rescuing of her own, saving John Darling from the pirates and even sharing in his first kiss.

I’m 23-years-old now and likely too old to be a visitor of Never Land. Yet I’m still drawn to the story: not quite a fairy tale, but more a coming-of-age fantasy, one in which the heroine Wendy rejects a life where she cannot “grow up” on her own terms. Like Wendy, I might not be able to fly, but I’m sure as hell ready to evolve.

Allison McCarthy is currently at work collaborating on the first issue of a feminist zine which should be available this spring. Her writing has been featured in magazines such as Girlistic, The Baltimore Review, JMWW, Dark Sky, The Write-Side Up and Scribble. She recently guest-blogged at Womanist Musings and serves as a contributor to the feminist group blog Girl with Pen and ColorsNW Magazine