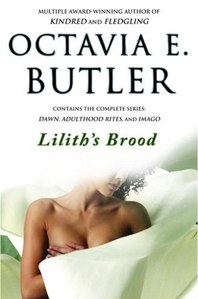 I couldn’t resist doing a bit of a mini-review of Octavia Butler’s trilogy Lilith’s Brood (formerly published as Xenogenesis).

I just finished it, and it’s surely one of the most complex and interesting books I’ve read in a good while. It sounds a bit cliched, but it really did suck me in from the first line to the last page.

Lilith Iyapo wakes up in a plain cell, where she is kept in almost complete isolation, other than disembodied voices who question her. Gradually we find out that the Earth has been poisoned and most of humanity has been killed in an apolcalyptic war, and Lilith, along with all surviving Humans, has been saved by an alien people, called Oankali.

The Oankali are ‘traders’, who have an innate urge to seek out new life, reproducing and forever changing themselves and the peoples/life they find. Under normal circumstances, this is meant to have an element of the voluntary about it, but not in this case, because the Oankali have rescued Humans from certain destruction – and because of what they call “the contradiction” – genetic predisposition towards intelligence and hierarchy, which they say would always mean Humanity would self destruct.

The Oankali sterlise all the Humans they rescue, meaning they’re only able to reproduce within Oankali families (of male, female and a third sex, ooloi), which would ultimately mean the end of the Human race, as the children would be constructs – replacing both the Oankali and Humans as distinct races. Given that it’s forced upon them, Humans generally find the proposition that they will be the last generation of Humans frightening and disturbing.

Meanwhile, those Humans that reject the Oankali and try and strike out to settle on their own on Earth revert to a violent, hyper-patriarchal way of life, where women are sold and raped as a matter of course. You’re not left feeling humans=good, aliens=bad, oh no… indeed, while the Oankali’s actions evoke eugenics, are the Humans resistance falling back on notions of racial ‘purity’?

Really, I don’t want to go any further into the plot, as part of what’s interesting about the collection is the way Bulter unfolds information on Humanity’s predicament. But I’m sure that’s enough to guess at some of the themes of interest which are grasped at in the book, including what it means to be human, the nature of freedom, slavery, reproductive rights, eugenics, genetic engineering, racism, sexuality, consent, sexual violence, human reactions to difference, disability, ‘alienness’, othering, gender – in particular masculinity.

One particularly (intentionally?) creepy element is the near invisibility of LGBT Humans in the books. Other than a few mentions of homophobic behaviour and attitudes of some Human men, the issue is mostly left undealt with, sex is not just about reproduction in the book, far from it, but its described uniformly as “mating”. The Oankali are fixed in female-ooloi-male groupings (actually, it’s a bit more complex: female Oankali, male Oankali – usually brother and sister, ooloi, female human, male human).

The reader is left to wonder whether the Oankali, with their biological imperitive to reproduce with humans, have simply selectively not woken up LGB Humans… And, while Butler does interesting things in terms of the gender identity of the Oankali (in addition to introducing a third gender, they have no gender until they go through a puberty-like metamorphisis), trans and intersex Humans are not mentioned at all.

I’m new to Butler – other than Lilith’s Brood, I’ve listened to an audiobook of Kindred (in which Dana, a 26-year-old black woman, is repeatedly pulled back in time from LA in the 1970s, to a plantation in the antebellum South, where she saves the life of the plantation-owner’s son, who is also, she discovers, her ancestor).

Despite the traditional time-travel bit, because the book is set in actual history, it’s a very different read. But it actually does deal with some of the same/similar issues.