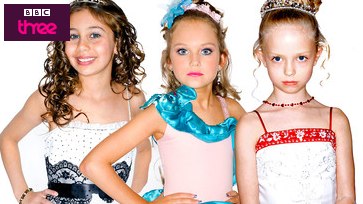 Tyla, however, blew Madison right out of the water. Also nine, she is the youngest girl in Britain to wear contact lenses (glasses being ugly, of course), she has highlights in her hair, and, aged seven, had plastic surgery. Her mother explains that this is because when she was born, she wasn’t a cute baby. In fact, her mother (who is incredibly pro plastic surgery) was “quite worried”, explaining that “no one wants an ugly child”. Looking at the baby photos, I tried my hardest to figure out what could possibly be wrong with Tyla.

Apparently, it was her ears. They stuck out, so they had to be changed. I say apparently, because I can assure you I saw nothing wrong with the way she looked. She was, as is every baby, adorable.

But then, why should it even matter? So what if a child is ‘ugly’? Does that mean they should be ‘fixed’? Or would this lead to insecurity in a child, who would believe that they were imperfect – that there was something wrong with them? Not in Tyla’s case. Already, at nine, she pored over glossy magazines meant for 20-year-olds, pointing out “unattractive models”, and their “imperfections”. “I think some of my friends are pretty,” she said, and then smiled “but I’m one of the prettiest”. She, like thousands of other girls, is already in training for a world in which women must hate other women in order to like themselves.

More disturbing even than the plastic surgery was the sexualisation of these children. Even seven-year-old Sasha performed a rather raunchy number for the final competition, wiggling her hips and writhing on the floor. Worst was Tyla, whose mother had put together a portfolio, which she proudly showed the other pupils at her private primary school. It consisted largely of pictures of Tyla pouting coyly over her shoulder, t-shirt slipped down, in a disturbingly inviting way. After skipping round, wiggling her bottom, Madison ended her dance routine lying on her side, hips out, skimpy costume stretched over her pre-pubescent body. Shudder.

The winning entrant’s dress was a mere £450

Career-wise, it was disappointing news. Madison was in possession of a “believe board”. On this board, she tacked pictured of beautiful models, alongside notes “I will be beautiful, rich and famous”. According to her mum, a born again Christian, God has given “beauty and attitude” to Madison, as her “talents”. These she must use to be a “winner” in life. This family repeated the word “winner” like a mantra time and time again.

Tyla simply wanted to be “famous in some way”, while, when Sasha was questioned, she answered “a vet…. or a superstar”.

While its true that the mothers in this programme wanted the best for their children, it was also true that they didn’t appear to have considered that these children were capable of anything but looking cute, that they wanted to pursue anything other than modeling. Sasha wanted to enter the competition to hopefully help lift her family out of poverty. No mention of the fact that qualifying as a vet would also help a great deal.

The most alarming aspect of the show was, naturally, the pushy parents. I say parents, but there was not a father in sight. “People say all children have beautiful figures, but I don’t think so. I think Madison has a gorgeous figure, even though she’s only nine. Its lovely. She has the perfect looks for a model, as long as she grows up to be this beautiful, she could be really successful,” said Madison’s mother. The idea of a mother sizing up her child like a piece of meat was highly disturbing. Madison’s mother seemed to treat her like a living doll. “She looks just like Barbie,” she proudly proclaimed at the sight of Madison in a frilly pink dress and matching lip liner.

There also seemed to be an underlying class issue within the pageant – as one judge put it “a smile’s not going to do it”. Indeed, many of the contestants (including Madison and Tyla) had spent months and a small fortune on singing lessons, costumes, catwalk classes and fake nails. The winning entrant’s dress was a mere £450. It was highly ironic that beauty did not seem that important in a beauty pageant, and perhaps it might as well have been called ‘How Good Can You Afford To Look?’ The pageant brought into question what kind of beauty, and what kind of girl, society approves of as desirable – clearly the richer ones. Girlhood, it seemed, should be dependant on how many pretty dresses you can buy, on whether you can afford to become little more than a decorative ornament. Madison, for example, wanted to be a model, because, in her eyes, the only other option was “sitting round the house doing nothing”. It seems that many girls are still under the impression that there are only two choices in life – sit around looking pretty while your husband earns pots of money – or sit around looking pretty and get paid for it.

It is worth noting that it was the least privileged of the three children who seemed to be entering for the best reasons. Sasha’s mother hoped that the contest would help boost her confidence, as she was painfully shy. Sasha’s mother was also clearly the sanest woman there – confiding with the programme makers, she expressed total horror at the appearance of the other contestants. She, unlike the other mothers, limited her daughter to glitter and lip-gloss, feeling that anything else would be “exploiting your own children”, and it was commendable that she didn’t really care whether or not Sasha won.

The outcome of the pageant was also the most successful for Sasha: although she didn’t win, she went on to two modeling jobs afterwards and is now much more confident about herself. All-in-all, one has to admire her mother, whose only ambition was that her daughter should feel better about herself. But even so, I do worry that, should her beauty fade, her confidence will also disappear, since that it what it has been built around.

The pageant itself was a simple affair, taking place in the ever-glamorous Milton Keynes. Each contestant was required to do that walky thing, perform a party piece and smile scarily in a sparkly dress. Even the party pieces themselves proved to be achingly dull and conformist: singing, dancing, flouncing around. I’m not saying these aren’t impressive talents, I’m just saying that they’re the only talents girls are expected to have. Surprisingly, one of the runners-up was a boxer, although again I feel that she was probably chosen in an “aw, look, she’s a non-conformist, how cute!” kind of way.

Girls are still being told they have one sole objective: to look pretty, and if they don’t, they should feel bad about it

It broke my heart to think of these children (none of whom won) as they left the venue. At an age where my biggest body hang up was wondering when my next tooth would come out, what would these girls now think of themselves? That they were ugly? Or indeed, that it mattered? That they were worthless, because their only ‘talent’ had been beauty, and they had failed at it? Which would grow up to suffer from eating disorders, (which are affecting younger and younger children), or to believe that fake tans and plastered-on smiles are more important than intelligence, wit, compassion and love?

While consenting adults in Miss UK are well aware that they are being judged for completely superficial reasons, I find it hard to believe that it was seven-year-old Sasha who filled out her application form, or that nine-year-old Madison and Tyla, whose entire lives in the past three months has been spent on expensive lessons, treatments and outfits, did not feel like massive failures as the winner was announced. Sure enough, moments later, Madison stormed out of the room in floods of tears. Her sister, also in tears, looked terrified: “She’ll think she’s ugly now, she’ll have no confidence.” Before hand, Sasha whispered “I’m scared people will laugh at me” and what would Madison think if she didn’t win? “That I’m not pretty enough”.

The sight of Madison, squeezing her teddy for comfort as her mother plucked her eyebrows, surely sums up all that is wrong with this kind of competition. All-in-all, the programme treated its subjects as bizarre, laughable freaks. But it wasn’t about babies or beauty queens. It was about children. Real children who, from as young as seven, are being told, taught and drilled to believe that, without their looks, they are nothing, that beauty is a talent, and indeed, the very essence of femininity.

In a world which claims to have liberated women, I can’t help worry that, as far as this show is concerned, girls and women are still being told they have one sole objective: to look pretty, and if they don’t, they should feel bad about it.

Although the programme depicts the mothers as evil vain puppeteers, (well, naturally, they don’t have husbands to keep them in order!), one can’t help but feel it is not the mothers, but society itself that is to blame. These women all confessed to feeling extremely insecure about their own looks and seemed to feel imperfect.

They, like their children, have been brought up in a society which, despite its pretence of gender equality, is still sending out the message that to be beautiful is the very best and most important thing a woman can be and, if you aren’t airbrushed, or the right shape, height, hair colour, then you need to fix yourself. Men don’t need to bother objectifying women, they are doing it all by themselves. The cure for this is simply to ensure that we teach our children that their appearance does not matter. But, failing that, I am personally opting for listening to Pretty by The Raincoats until it is imprinted on everyone’s brain waves.

Eleanor M. is a 17-year-old feminist from Edinburgh. She does nothing to help the redhead stereotype by raising her voice during arguments and going to Muay Thai. On the other hand, her boxing gloves are pink