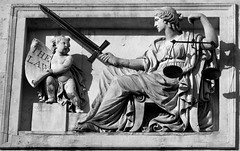 Of course, anyone harming anyone is an awful crime, but women are often doubly condemned because of these gendered care assumptions and ideas about what is natural and feminine. Men, on the other hand, can act in a violent manner without transgressing the natural order. It may be condemned as a bad act, unhelpful to the day-to-day running of society, but it is all-too-often interpreted as simply the male nature gone too far: the latent possibility of violence which is expected to lie in men. Violent crimes are seen as the product of an unchecked male nature, a part of the masculinity which ‘real’ men should embody. If men go before a jury in court there is already a certain societal acceptance of their violence.

‘Nagging’ is seen as acceptable provocation; years of abuse is not

The response to women who commit violence in any form is different.

Women may have gained some kind of recognition in the court for violence committed after years of abuse through the creation of the legal category ‘battered wife syndrome’, but this does not always mean justice is served. Women who kill violent partners often end up with harsher sentences than men who have killed their partners without such abuse. Campaign group Justice for Women have examples of such inequality in sentencing on their website.

Compare the example of Brian Steadman, jailed for just three years in 1995 for killing his wife by hitting her 13 times with a hammer after pleading diminished responsibility because his wife constantly nagged him, with the example of Zoorah Shah who had experienced 20 years of sexual and physical violence from her partner – who then began to abuse her eldest daughter – and was given 20 years for his murder.

Justice for Women tells us she remains in prison.

There are lots of other examples here which illustrate that women are not allowed to be violent, the reasons for their violence are rarely taken into account and the idea of what is acceptable provocation in the law is gender-biased.

‘Nagging’ is seen as acceptable provocation; years of abuse is not.

Another example of a harsher sentence being meted out to women for lesser crimes of violence is that of the Scott sisters in the US who were given a double life sentence each for an armed robbery in which no one was killed or injured and less then $12 was stolen (see the Huffington Post for a quick overview of this case). The fact these women are black adds another dimension to the reasons for this extremely harsh sentence being served.

Male violence is often put down to ‘sorting out differences’ or ‘teaching someone a lesson’, argued Elizabeth Stanko; this downplays the violence, normalising it, and making it seem everyday. It appears to be hard for people to accept that a woman could be violent – for any reason – and if she is she will become an horrendous aberration in the eyes of the jury and the media.

It is obvious, then, that the law and the court room are gendered in a way which has serious consequences for women.

Of course, women who commit violent crimes must pay, but why should a woman have to spend longer in jail than a man for the same crime (or a lesser crime)? Why should a woman be found doubly evil? If the law is truly to represent everyone equally then the gendered perceptions surrounding women, men and violent crime need to be addressed.

The media, as always, have a role to play here as well as law enforcers, lawyers and the court system itself. Media reporting was what inspired me to write this article as it was so blatantly gendered. Watching Question Time, I witnessed the panel having a discussion about Roman Polanski and a 13-year-old girl he had abused in the ’70s. Outspoken members of the panel dismissed the abuse: it had happened many years ago, the woman involved had forgiven him, maybe it did not really matter now and we should move on. It was added though that the law probably should be followed through.

Apart from that last small hint that these members of the panel had any sense whatsoever, I failed to comprehend anything else of what they were saying. Does the fact priests abused boys in their care decades ago make the abuse any less vile? Do we stop those cases being prosecuted because the events occurred some time ago? Why should this case be an exception? The panel’s reason for this exception seemed to be that Polanski was a great film director. But why should it be that a great film director finds the law more forgiving?

I cannot help but think that gender is at work here. First of all, in the eyes of many juries, this act might be considered a ‘sex crime’ – a crime in which overwhelming desire led to violence. Men, once again, appear to have an excuse: a certain level of violence is seen as acceptable in all men and sometimes it, unfortunately, gets out of control. As well as that, the belief in uncontrollable male sexual urges comes in to play – rape and assault occurs because men, naturally, don’t know how to stop themselves.

I find these ideas ridiculous, and utterly patronising towards men: men are not animals; they can control themselves and take responsibility for their actions! However, our society has come to accept that ‘proper’ masculinity, violence and strong sexual urges are one and the same. Polanski’s crime was not about desire; it was about power over another human being, with sex used as a weapon of torture. Polanski abused a 13-year-old girl. An adult abused a minor. That’s all we need to know. Polanski deserves punishment. The woman he abused has said that she feels Polanski will not harm anyone else and that she knows he regrets what happened, but that she wants the case properly resolved. This may be a form of forgiveness, but it is not forgetting.

Secondly, the idea that Polanski is a ‘great man’ appeared to be clouding the judgment of members of the Question Time panel. The suggestion is that a talented man is needed in society; a useful member of the community who would be wasted if punished and sent to prison. This appears to be entirely gendered to me: would it be the same reaction if a famous and talented woman abused a 13-year-old? The very suggestion that artistic work should outweigh the torture of another human being trivialises both that act of abuse and all other victims of similar abuse; they are silenced in the face of a society which tells them the talent of their abuser is worth more than the physical and mental torment they have experienced. Abuse is abuse. Famous and talented male perpetrators should be treated in the same way as everyone else should be treated: as the law states.

A huge shift in thinking is needed, but the court room in particular needs to become more aware of the biases and gendered thinking that occur around cases of violence

Finally, I wonder if the fact Polanski was male and the child was female also plays into societal acceptance of what happened. This situation is heteronormative: a heterosexual sexual encounter is seen as a ‘natural’ one. The fact we have a child involved here is incorrect but the desire for a person of the opposite sex (people believe they are sex crimes) is natural.

Furthermore, Geimer is now a woman and therefore perhaps it is easier for people to look at her and think only of a grown woman involved in an ‘ordinary’ sexual encounter. The reaction to this case seems to me to be part of a long tradition of older, powerful males using women’s bodies as objects for their desire. Women are meant to accept this state of affairs and, indeed, see it as an honour; not complain, not suggest abuse, not deny men their desires.

The acceptance of this tradition can be seen in the low rape of conviction for rape cases. Rape Crisis Scotland lists statistics from the Scottish Executive which puts the number of successful convictions for cases of rape reported to the police at less than one in 20. They also have statistics from the Home Office which state that reporting of rape in England has increased by 400%, but convictions by just 40%. The Home Office states that just 7.5% of cases reported in England end in successful conviction; in Scotland it is below 5%. Polanski is one case in a wider culture.

The issue is this: the connections between women, men and violent crime are gendered. This leads to real consequences such as harsher sentences for women, a level of violence being accepted or even expected from men and women who commit crimes being judged more harshly than if a man committed the same crime.

A huge shift in thinking is needed, but the court room in particular needs to become more aware of the biases and gendered thinking that occur around cases of violence.

The media should be more responsible when it reports cases of violence, aware of the messages it sends out to the public about what to think and what behaviour is and is not acceptable.

Obviously, panel shows like Question Time cannot control the views of those participating, but the chair should strive to create a balance in the time given to all sides of an argument and to point out the flaws of an argument when necessary – this can help perpetuate debate, as well as being more democratic, which is surely what such programmes should be about! Men and women should be tried and charged on an equal basis for violent crimes without gender biasing the law. We would then have a fairer system and a way for victims to find some sense of justice and peace in their lives.

Photo by Monocle, shared on Flickr under a Creative Commons license

Rachel Thwaites is 22, a postgraduate student and a feminist