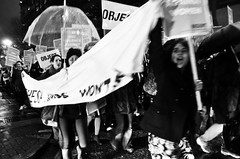 I spent a short while at the beginning of the march carrying the banner for the NUS Women’s Campaign, before going to join comrades from Feminist Fightback who were marching with IUSW and x:talk to fight both exploitation in the sex industry and violence against women. Prostitution is obviously a huge point of contention within the feminist movement, something which I find difficult to swallow: I don’t believe that sex workers are the reason that women are sold into prostitution against their will, nor the reason that women are attacked and abused, simply because I don’t think it’s right to say “prostitution is violence against women” – certainly not as a blanket statement. There are, of course, some areas of the sex industry which could be quite easily called this, but only some. There is just one group of people at fault for violence against women, and those people are the attackers, abusers and violators themselves.

I am hurt, because on this night, one of the few each year when feminists claim to be fighting together for one cause, I was insulted and abused myself by someone who is supposed to be a sister

But this not about my opinions on the sex industry. From this point in the march on, two women kept coming to us, shouting at us for daring to be there, throwing insults, shouting over us and attempting to hide us from those watching and taking photographs at the side of the road. At one point, one of them asked me why we hadn’t organised our own march, and I asked why we should: are sex workers not women too? The woman yelled in my face, “people have died because of your trade, you filthy whore!”

Of course, if that’s how she truly felt about me, then she has every right to that opinion. However, I suspect that she described me in that way believing me to be a sex worker myself. If so, she was wrong: whilst I obviously don’t have a problem with those who choose to do sex work, I have no desire to do it myself, and when I told her this, she spat at me “why the fuck are you doing this, then?” and eventually told me to “fuck off!” – and I am hurt, because on this night, one of the few each year when feminists claim to be fighting together for one cause, I was insulted and abused myself by someone who is supposed to be a sister, someone who was, in fact, moments before, shouting “Women, united, will never be defeated!”

(Ed note: Some readers may also have seen Feminist Fightback’s open letter about their experience on the march. For context, Feminist Fightback say in the statement that they were approached and interrogated by the police at the instigation of a steward.)

Reclaim the Night is always promoted as a peaceful march. Stewards are trained and briefed not to give orders to anyone or ‘police’ anyone on the march. If other marchers did this then that is unfortunate, obviously we cannot support aggression to other marchers. We have a policy of not asking anyone to leave the march unless they are aggressive or a man, this is a public event and is open to all. So it could have been anyone who shouted this.

Calling someone a ‘whore’ is completely unacceptable. Which is why it is such a shame that IUSW insist on carrying placards that refer to women in prostitution as ‘whores’ as if that insult can be reclaimed, see for example the article by the pimp Douglas Fox on ‘Feminism and whores’ currently on the IUSW website. The IUSW are concerned with protecting pimps and punters rather than women, I can’t understand why anyone would want to march with them. But that doesn’t justify aggression towards them and I’m glad to hear it was not a steward who did this, because stewards were explicitly briefed not to harass other marchers they may disagree with. As this is an open march we cannot possibly police who comes so it is open to all.

In the future if anyone experiences such harassment from fellow marchers they should tell a steward. All the stewards are buddied up and can ask for support from chief stewards – any woman being aggressive towards other marchers would be asked to leave as this is a peaceful demonstration.

The stewards training spelt out clearly that stewards are there to answer questions and provide a ‘wall’ between the police and the marchers. Stewards were told not to tell women what to do and not to pass on any instructions from the police in a way that suggested they had to do one thing or another. This is always spelt out clearly to stewards. We have had a situation in the past for example where women protestors sat down outside Spearmint Rhino to protest against exploitation and the police were very concerned at the road being blocked, Stewards were told not to tell women to move and we told the police we would just have to wait until women were ready to move.

Photo by Hannah Nicklin, shared on Flickr under a Creative Commons license