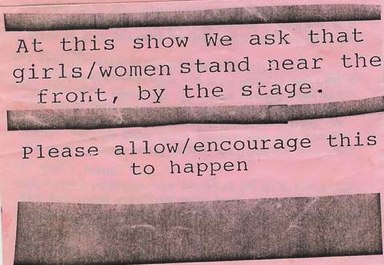 Bring the herstory of riot grrrl back into the present

The feminist-punk movement which was riot grrrl was hugely inspiring for me, and countless other girls and women. Riot grrrl created a platform – but what impact has it had, particularly in terms of inspiring girl bands and female-centred music?

I wanted this piece to project, and essentially to reciprocate, the enthusiasm and optimism which riot grrrl movement first infused in me. However, in trying to research where this vital revolution has led, the picture seems to be disappointingly bleak and subdued – and especially when compared to the highly energetic riot grrrl spirit.

To justify my fondness for – and appreciation of – the movement, and hence why I desperately wanted this article to be a positive one, I feel it necessary to explicitly state why for me, and countless other girls, this contribution to the ‘third-wave’ of feminism was so important.

The riot grrrls, who initially exploded out of, and into, the underground music scene in Olympia, Washington in the early 1990s were unquestionably, and regardless of whether all feminists wholeheartedly endorse their position or not, a revolutionary force for creatively-inclined women; especially women who had a passion for music.

Riot grrrls not only dominated the floor space at the centre of the circle pit, but also demanding to occupy centre-stage

The very existence of a women’s punk movement, in itself, was groundbreaking and, to this day, still remains something of an unrivaled historical anomaly. Further, the fact that its eruption was so unprecedented only added to the vivacious energy that the project was bursting with.

A decade prior to riot grrrl, the male-centric hardcore punk movement of the early 1980s plagued girls with feelings of alienation and segregation. This feeling of rejection from a music scene they so much loved was arguably a large contributing factor to the creation of the riot grrrl movement. Like the hardcore punk scene that had preceded it, however, the grrrl movement remained focused on anti-capitalist values and DIY ethics. The only difference was that, this time, the girls weren’t expected to stand at the side and hold their boyfriend’s coats while passively admiring the action from a safe distance.

This time they were not only dominating the floor space at the centre of the circle pit, but also demanding to occupy centre-stage. They point-blank refused to be side-lined or silenced any longer. All they had to do was pick up the instruments, fool around with them until the right sounds came out and voila! There were no restrictions anymore. If girls weren’t able to fully participate in an already existing music scene, then they would make their own. And it is for this cultural and political space that these women fought to carve out for their fellow females that I believe the riot grrrl movement to be so unique and important. It taught women everywhere that there was an absolutely real possibility for Revolution Girl Style Now.

So this unmitigated faith that I’ve invested in the power of riot grrrl was making it very hard for me to accept that the once deafening screams of women like Kathleen Hanna could ever fade into a potentially ignorable background drone. What I was struggling with more, however, was the sad thought that perhaps women since have not taken the proverbial baton that the feminist-punk movement fought to hold out for them and run, run, run like the Goddamn wind with it.

Many of the grrrls who were at the core of the movement certainly continued to keep the torch burning for women in music. In 1998, the same year in which Bikini Kill disbanded, Kathleen Hanna, one of the central figures of the riot grrrl movement, formed the electro-feminist band, Le Tigre, alongside Johanna Fateman and Sadie Benning.

After a handful of compilations, three EP’s, and three full-length albums, the second was called Feminist Sweepstakes, the band will continue to be remembered as important for the politically-charged music they produced. Unsurprisingly, given Hanna’s status within the feminist-punk scene, her subsequent endeavours have continued to receive more visibility than some of her riot grrrl counterparts. 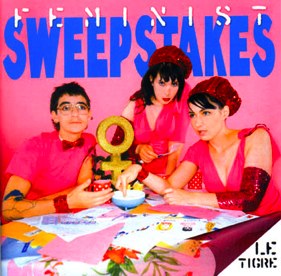 But many of the central figures of the movement have continued to work within musical and political frameworks in a dedicated way. Bratmobile, as one example, reformed in 2000 to release two more albums, after which leading lady Allison Wolfe began singing with the all-female band, Partyline. Molly Neuman, who alongside Woolfe started Bratmobile and the Riot Grrrl zine, went on to co-own Lookout! Records and start her own independent record label while also managing various girl bands such as The Donnas and Some Girls. Former Bikini Kill member Toni Vail now runs her own cassette label, Bands Against Bush, the Kill Rock Stars mail-order department, and continues to publish various zines. And last, but by no means least, is Heaven to Betsy’s Corin Tucker, who later went on to form Sleater Kinney; a band commonly understood as having been directly influenced by riot grrrl.

So it is evident that the women at the centre of the feminist-punk movement have kept their end of the bargain – and in turn, their integrity – by continuing their involvement in a scene they so fiercely fought to be present in. And it was a fight that resulted in lots of positive changes. Riot grrrl might not have caused a widespread societal ripple, but then again, that was never really on its agenda. As Red Chidgey noted in her zine, A less intimate disappointment: “Riot girl is not something with mainstream appeal. It will not change society. But it’s changing me. It’s not the fullstop manifesto point of my politics – it’s part, it’s creative resistance and it leads me further than its own boundaries.”

Riot grrrl fought to barge through the doors and wedge them open at a 45-degree angle, but this gateway still needs to be made wider

As Chidgey rightly notes, riot grrrl never really aimed to create what she refers to as a “fullstop manifesto”. It aimed to give women a foundation on which to build. It aimed to show them that it was possible for women to be at the core of a music scene; to be able to express themselves and become a part of a creative community. As Neuman and Woolfe wrote in their last issue of the Riot Grrrl fanzine, “This name is not copywrited. So take the ball and run with it!”

And to an extent, sure, their plea has been answered. Riot grrrl has, without a doubt, had a positive influence on various female musicians. Chicks on Speed, for example, can be noted as employing a direct continuation of riot grrrl ethics in both their music and the production which surrounds it. From the outset, the band have valued DIY practices and even run their own record label, which released the likes of Le Tigre, The Raincoats, and Ana Da Silva (a solo project by a member of the Raincoats). In less obvious ways, too, the riot grrrl legacy can be felt from the more mainstream acts such as The Gossip, through to bands like Hole, PJ Harvey and the Yeah Yeah Yeahs, right the way down to the more underground New York indie punk band, The Shondes. While the concept, which was purposefully never definitive anyway, may have digressed and, indeed, progressed, its legacy still exists as an empowering reference point for all girls.

However, I say that Neuman and Woolfe’s wish has been answered to an extent very deliberately. Because, yes; the feminist-punk movement has influenced and motivated other female musicians. And, yes; it has proven to women everywhere that they are more than capable of getting involved with their local music scene if they so wish. But what it hasn’t done – and what it, alone, could never do – is to allow girls and women to appear in equal proportion to men in music scenes. Riot grrrl fought to barge through the doors and wedge them open at a 45-degree angle, but this gateway still needs to be made wider to allow more women to pass through. Riot grrrl was a phenomenal start but this fight is nowhere near finished.

As a girl that goes to underground hardcore shows, I speak from experience when I say that women are still grossly under-represented at gigs. And while I, myself, have been fortunate enough never to be purposefully side-lined at shows because of my gender, I do know of many other girls who have felt completely excluded at events which supposedly advocate a ‘community’ spirit. In terms of my own experience, I have to admit that I do often feel isolated simply by being such a blatant minority. So it is for musically and creatively inclined women everywhere that I implore all grrrls to continue, in whatever way you choose or feel comfortable with, the work that riot grrrl started. Just as I feel all women are indebted to preceding waves of feminism that have fought to let us stand in the position we do today, I feel that it is our duty to continue the fight that riot grrrl started within our music scenes.

Back in October, The F-Word published a review of of the British post-punk band, The Raincoats, by Lydia Harris, confirming to me that this area definitely is still something women are interested in. This is something that girls and women do still care aboutnow. So for everyone who this matters to, take this as a call to arms if you will: we need to come back together, concentrate our focus, and continue to batter down these ridiculous barricades. We can’t let the important work of riot grrrl fade into the background of history as merely a novelty movement.

Of course, I’m not denying that there are many great female bands and solo acts currently making inspiring music, but they are often working in a way that is too disparate and diffuse to make proper headway with this issue. It was the concentrated nature of riot grrrl, the tight-nit community spirit within which women were working, encouraging and motivating one another, that allowed the movement to progress and, ultimately, to take effect and have a significant impact. Let’s not forget that what may have started out as a small movement in Washington State, ended up not only spreading rapidly over the whole of the US, but continued to extend over to Europe as well. In recognising riot grrrl as the base from which to build, we can acknowledge where the movement could have done more – or eliminate the factors we believe it just straight up did badly or wrong – to make the next movement even stronger. Small and inclusive communities have always been integral to the workings and the successes of underground music scenes, and are needed once again here, I believe, to push grrrl music forward. Our talents are evident, our will is strong and our motivation is unquestionable. We simply need to come together to fully consolidate and realise our potential. Riot grrrl has proved to us that this can be done; that this has been done. So what are we waiting for? Let’s go.