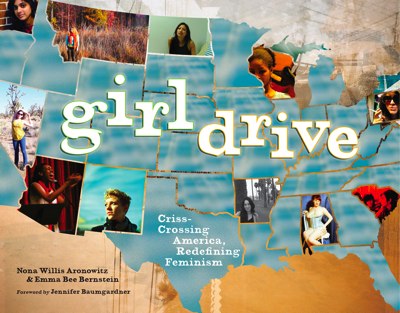 When young feminist writer Nona Willis Aronowitz and her feminist photographer friend Emma Bee Bernstein met for brunch one day, they excitedly came upon the idea of taking a road trip across the United States in order to talk to other young women about what feminism means to them.

Girldrive: Criss-Crossing America, Redefining Feminism is the result – a beautifully designed and exuberantly written journal of the two friends’ trip, and an insight into where young contemporary US feminism is at.

But don’t let the emphasis on the US put you off – the diversity of women’s opinions presented here are just as relevant to UK readers and the two authors’ account of the fun and freedom they experienced whilst out on the road, just as inspiring.

We set off in Chapter 1 from Chicago, and each chapter thereafter stops off in a different state, containing profiles and photos of the women they meet along the way, Nona and Emma’s personal reflections and striking photography of the landscape they drive through.

The book focuses on young women living and working away from the feminist spotlight, not just as artists, writers and academics, but also as government workers, single mothers and community activists

Nona and Emma talk to women from a variety of racial, economic and cultural backgrounds, probing them for their thoughts on feminism and the issues affecting them as women. Their individual responses form the bulk of each chapter, and take in a wide range of topics from work, motherhood, global feminism, body image, gender, religious and cultural identities, abortion and activism.

Girldrive’s focus though, is on young women living and working away from the feminist spotlight, not just as artists, writers and academics, but also as government workers, single mothers and community activists.

The voices of women who don’t identify as feminist are also included, showing that claiming the f-word is not always a prerequisite for being conscious of, and pissed off with, sexism. Lauren in Nashville, studying to be a midwife, is an example of someone who doesn’t call herself a feminist, but who is still conscious of how gender dynamics affect women’s lives, saying: “Women are often treated like machines” in the context of patriarchal medicine, fuelling her own woman-centred approach to the birthing process.

Nona and Emma also meet women who are aware of sex-based oppression, but who feel their race, cultural and/or religious identities bring more profound discrimination. For example, Simian, a Muslim woman living in Phoenix feels “gender equality is not a priority ‘when you’re entire culture is under attack'”.

The picture of feminism Girldrive builds is suitably inclusive, diverse and relevant

For a book that sets out to “re-define” feminism for the current generation, speaking to women who do feminism in more localised, everyday ways – for example the Red River Ladies in Fargo who work at the local abortion clinic, and Mayaba and Mandisa in New Orleans who are contributing to the re-building of their city following Hurricane Katrina by getting involved in anti-violence and women’s health projects – and not just to the usual suspects (full-time feminist writers and employees of feminist organisations, for example), is one of Girldrive’s strengths, and makes for a refreshing and unique take on contemporary feminism.

This also means that Girldrive doesn’t attempt to formulate a single definition or way forward for feminism. Whilst you may find yourself wishing some of the interviews were longer than a few frustratingly short paragraphs, overall, the pithy profiles and myriad voices and views that emerge contribute to the authors’ intention of producing “not a definitive guide to contemporary feminism” but “a continuation of an open-ended, fluid conversation”. So the picture of feminism Girldrive builds is suitably inclusive, diverse and relevant.

What’s also refreshing about Girldrive is that it’s the first book I’ve come across which I feel specifically speaks to my feminist generation – those of us in our 20s, who do our activism as much online as off, who whilst inspired by the anthologies of third wave writing and riot grrrl music of our older Gen-X sisters, now need to claim our own voices and articulate our own politics, having since come of feminist age in a more conservative socio-political time. 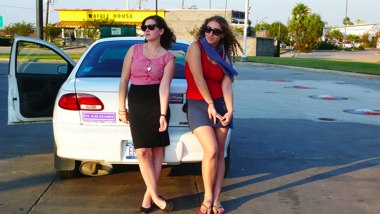 Girldrive starts to open up the space for this to happen, showcasing the concerns of the next generation of feminists, as they figure out their lives and discover their politics and passions.

What really bursts at the seams, though, are the feelings of excitement and freedom promised by taking off and hitting the open road on a voyage of personal and political self-discovery, which come through, interspersed amongst the interviews, in Nona and Emma’s more intimate, diary entries on the fun they have, the conversations they share and the scenery they come across throughout their time on the road.

That these two young women decided to undergo what has been deemed a traditionally masculine activity – the road trip – and replaced its white boy so-called rebel yell of sex, drugs and rock ‘n’ roll with the more radical verve of feminist and youth energy to represent the lives of a diversity of women, makes Girldrive an even more invigorating and enjoyable read,

Once finished, it leaves you wondering, ‘what would a UK Girldrive look like?’ Anyone up for it?