The Second Sex: lost in translation? 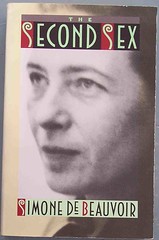 As a French student I was fortunate enough to read and study Simone de Beauvoir’s The Second Sex in the original French, but I imagine many of you have read it in the English translation. Any translation will inevitably lose some nuance of the original, but since the 1980s, Beauvoir scholars have repeatedly highlighted the inadequacies of the English translation, some of which have led to anglophone scholars and readers misinterpreting Beauvoir’s arguments.

At the publishers’ request, the male translator (H.M. Parshley) removed over 10% of the original content. Extensive description of women’s history and references to historical female figures are omitted, along with qualitative evidence of women’s oppression in marriage and within the home, while illustration of men’s dominance and superior social status is retained. These omissions have in some cases served to fuel accusations that Beauvoir privileged men over women.

Key philosophical terms, drawn from Beauvoir and her partner Jean-Paul Sartre’s existentialist theory, were translated inconsistently and, in many cases, wholly inaccurately, to often disastrous effect. The first academic to analyse Parshley’s translation, Margaret A. Simons, points out that the existentialist term for human consciousness , être-pour-soi (implying a potential for free choice), was not translated by the standard English equivalent ‘being-for-itself’ but with various versions of ‘in accordance with one’s true nature’. This wholly distorts both Beauvoir’s feminism and its philosophical basis. According to Beauvoir, there is no human nature: femininity has been constructed and positioned as natural in order to oppress women and keep them in a state of inauthenticity (existence that is not freely chosen or determined).

Beauvoir asked Margaret Simons to publish a new translation of the work, and feminist scholars have approached the publishers with requests for a new translation, but to no avail – until 2005. The resulting new translation was published in November last year, although I hadn’t heard about it until a few weeks ago, when a friend forwarded me this review by feminist academic Toril Moi.

And oh how my translator’s brain and my feminist heart hurt when I read quite how royally Beauvoir has been let down – again.

For a start, the translators are neither philosophy nor feminism specialists; they’re English teachers who write textbooks and cookery books. They’re barely even professional translators, having only minimal French-English translation experience. Quite why the publishers thought they were suitable, particularly given the obvious importance of the task in the face of such cutting criticism of the original translation, is anyone’s guess, but Moi’s review is damning.

She argues that the new translation has three ‘fundamental and pervasive problems: a mishandling of key terms for gender and sexuality, an inconsistent use of tenses, and the mangling of syntax, sentence structure and punctuation’. The basic translation errors are bad enough; check out this beauty:

In the chapter on ‘The Married Woman’, Beauvoir quotes the famous line from Balzac’s Physiologie du mariage: ‘Ne commencez jamais le mariage par un viol’ (‘Never begin marriage by a rape’). Borde and Malovany-Chevallier write: ‘Do not begin marriage by a violation of law.’

If you’re interested in translation, I suggest you read the full review: there’s plenty more where that came from. I’ll stick to highlighting the distortion of Beauvoir’s feminism, which unfortunately appears to occur along the same lines as the distortions in the original translation.

The translators render the French féminin/e (of or pertaining to women) as ‘feminine’ (essentially female), meaning Beauvoir’s work now ‘teems with references to the “feminine world”, “feminine literature”, “feminine reality”, “feminine individualism”, “feminine magic”, “feminine destiny” and so on’. Littérature féminine is simply literature written by women. Given that Beauvoir rejected the notion of a female essence or nature (in contrast with other francophone feminists such as Luce Irigaray) and that her entire work aims to expose femininity as a social construct, this is a massive error.

This error is compound by the interchangeable translation of la femme as ‘women’ ‘woman’ and ‘a woman’. Moi explains:

Parshley translated ‘On ne naît pas femme: on le devient’ as ‘One is not born, but rather becomes, a woman.’ Borde and Malovany-Chevallier write: ‘One is not born, but rather becomes, woman.’ […] This error makes Beauvoir sound as if she were committed to a theory of women’s difference. But Beauvoir’s point isn’t that a baby girl grows up to become woman; she becomes a woman, one among many, and in no way the incarnation of Woman, a concept Beauvoir discards as a patriarchal ‘myth’ in the first part of her book.

While the new translation deals more appropriately with Beauvoir’s existentialist vocabulary, Moi suggests the translators get too caught up in philosophical language, often replacing ordinary words with philosophical terms:

Borde and Malovany-Chevallier doggedly translate ‘alienate’ and ‘alienation’ every time the word turns up, regardless of what it means. The result is that they translate ‘aliéner les biens immeubles’ (‘dispose of landed property’) as ‘alienate real estate’.

To top all this off, the translators’ insistence on trying to reproduce French linguistic style in the English – a basic translation error, and one of the reasons why translation is much trickier than many non-linguists assume – apparently makes the reader’s job far more difficult than it should be; Moi says: ‘I feel as if I were reading underwater’.

I haven’t read the translation myself, but I trust Moi’s judgement, and I’m hugely disappointed. At least I can add ‘write a decent translation of The Second Sex‘ to my list of things to do before I die.

Photo by cdrummbks , shared under a Creative Commons License.