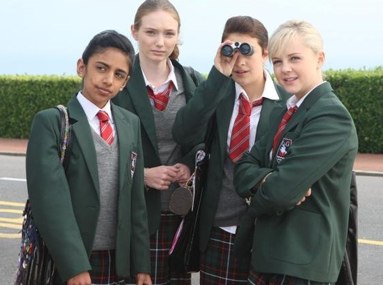 Why of all films in the world would I choose to see this one in the first place? To be honest, it wasn’t really a matter of choice, but a busload full of 14-year-old girls begging for it to be shown on a trip abroad. The film seemed suspect from the start, but my colleague assured me it was “actually quite cute”. I decided to give it a go just to see what ‘today’s youth’ was into, and ended by trying to tell my pupils that love-interest Robbie was a selfish coward (to no avail).

The film starts off promising – the lead character, Georgia, is attending a fancy dress party in a self-made stuffed olive costume, instead of the sexualised/infantilised staples normally worn at these occasions – only to find that her best friends have given in to the pressure and turned up as an angel, a devil and a fairy princess. She leaves, distraught and embarrassed, to throw a teenage temper-tantrum in front of her bewildered parents at home.

It gets worse from here. The film includes every teenage girl stereotype there ever was, and not in a good way. Director Gurinder Chadha, who also co-wrote the script based on the Louise Rennison novels for teenagers, Angus, Thongs and Full-Frontal Snogging and It’s OK, I’m Wearing Really Big Knickers (US title: On the Bright Side, I’m Now the Girlfriend of a Sex God), stated in an interview with filmeducation.org that the film is “making serious points about the fact that girls are always being told they’re too fat or too thin, or they’re not curvy enough, or their hair is too straight and with all the magazines, there’s constant bombardment of having to look like a particular type of perfect model.” However, instead of confronting these issues, they become a normal backdrop to the romantic comedy about to ensue. Like any teenage girl therefore, Georgia and her “Ace Gang” are preoccupied with the way they look, their status and, obviously, boys.

In the introduction to Georgia and her friends’ school life, we see the generic cliché high school characters before we hear the girls discussing sexual matters in break time. So far so good. The film then moves on to presenting the male main character(s), Robbie and Tom, strutting across the school yard with the girls swooning over these “sex-gods”. In the ensuing “boy-watching”, the four girls practically stalk the group of boys while peering through binoculars.

This is easily interpreted with the ever-ambiguous all-encompassing statement of empowering women to live out their sexuality – the girls seeing the boys as sex objects and pursuing them, that is. But this is no different than a Jane Austen moment of claustrophobic passiveness. Looking further into the film, the girls do not see the boys as sex objects but as romantic heroes, and nothing is done to portray them any differently. Secondly, the girls cannot pursue which is precisely why they get obsessively preoccupied with stalking the boys and manipulating situations to meet them – while the boys just get on with their life and have some fun independent of anyone’s affection!

Some of us have been there – angsty teenage girls wondering whether this or that boy would like us, validate us, but not being able to do anything about it – because straight-forward women are seen as a turn off (or, like Georgia’s rival Lindsay, seen as ‘slags’). The only weapons of restraint, not choice, are looking your best and worrying about your image, and subtle stalking and set-up of opportune moments to display oneself and ‘catch’ the object of desire. This is exactly what the main character must do then – she and her best friend stalk the fraternal twins, or sex-gods, into their parents’ organic food shop, trying to appear in a good light and raise their chances of being ‘picked’. Georgia’s best friend Jas succeeds in dating Tom, while Georgia is left to think up schemes to wean Robbie off his cliché blonde girlfriend Lindsay, such as getting snogging lesson from a creepy classmate, or pretending she lost her cat in order to spend time with Robbie. The active pursuit only goes as far as displaying their charms, like passive objects to be judged they create scenarios to catch and trap the desired boy.

This is part of the frustration of being a (hetero) teenage girl (and later on, a woman) and it’s a shame neither the book nor the script allows for more freedom and assertiveness in the girls’ approach to love, relationships and sex. In 1949, Simone de Beauvoir’s The Second Sex described the adolescent girl as trapped in passivity by societal norms, brought up to please and wait for her rescuer, turning towards manipulation, secrecy and deception to reach her aims as she is otherwise bound to be non-assertive.

This dilemma becomes evident yet again in the events unfolding after Georgia and Robbie have shared their first kiss with each other. Robbie leaves Georgia behind by saying that he “has something to sort out” (finishing with his girlfriend Lindsey, we are left to assume) and she returns home to wait for his phone call, which never comes. Encouraged by the one-dimensional guidance of that sad genre called ‘self-help’ books, namely Men are from Mars, Women from Venus, she sets out to win Robbie back by the oldest of all manipulation techniques: making him jealous by going out with his mate who she isn’t even interested in.

The underlying message of the film: be nice and honest, and wait for the boy to sort out his important boy things then whisk you away to a life of blissful conditional self-acceptance

Sadly she shares this plan with her best friend who – after the situation has gone awry when Georgia’s pretend-date falls for her – tells her boyfriend who happens to be Robbie’s twin brother! Women – so fickle, aye! Generally this film doesn’t do much for representations of female friendships, but let’s focus on the finest bit of the unfolding drama: Robbie calls her a coward, a liar and ‘fake’, and turns his back on her. (She consequently also gets into a fight with best friend Jas about her ‘dishonesty’ and injures her.)

At this point, I was enraged and trying to convince my pupils, who were looking at Robbie, starry-eyed, and pitying Georgia for being so “silly” to “lose it all”, that he was the problem in the first place (erm, to no avail). If he had stood by his word and contacted her, or provided her with any information, maybe she wouldn’t have resorted to using his friend to make him jealous. Why did he not “sort it out” as promised, but then blame her for behaving in a silly, but understandable, fashion? Again, this shows the prevailing script of romantic relations between women and men. Women cannot be assertive without coming across as solely sexual, if they resort to whatever techniques they have been taught to get what they want without being ‘scary’, ‘assertive’ and ‘bossy’ (insert other negative synonyms for confidence in women here), they are branded manipulative liars.

Especially teenage girls fall into this trap, and it’s pretty sad that this film doesn’t do a thing to show a different, healthier approach with a positive outcome or resolve things in a different way. Because it is teenage girls sitting in front of the screen, trying to make sense of their feelings and modeling what they see: no alternative but to go the complicated frustrating route. In the end, Robbie and Georgia get together, but she is still branded as the one who made the mistake – a sad state of things where girls learn that their shortcomings or errors are not acceptable but need to be absolved by a man.

In in the final culmination of the film, Georgia gets the 15th birthday party in a club she had always wanted. Fatefully, her rival Linday’s party is on the same night, but all her friends have come to welcome Georgia with a surprise party. To top off the ‘girl fighting for boy approval and popularity’ plot, Lindsay turns up to shout at everyone for not coming to her party, only to be called a ‘fake’ by Jas who exposes her fake breast padding. Everyone laughs and Robbie, who is obviously in a band, sings a song for Georgia (to round off the teenage-dream-boy cliché and reinforce the trope that the boy does things, while the girl admires the boy’s actions).

The most depressing conclusion – sexism dressed up as emancipation – must be the film’s last lines by Georgia, now happily in love with Robbie: “I don’t care anymore about looking perfect, it’s so overrated! I don’t need a nose job or blonde hair, cause my sex-god boyfriend likes me JUST the way I am!”

Yes, that’s right. It is ONLY okay not to look like a model because you have a boyfriend and he likes you. It would not be okay just to be happy about the way you look without a boy liking you… cause they’re like the ultimate accolade in validating an object, sorry, woman.

All in all, this film is a sad testament to the tripe that’s being fed to the next generation. The worst aspect is probably that it disguises itself as something more progressive – but these are only platitudes – boy-stalking, sex-gods, snogging lessons. Fun, but harmless, because the underlying structure is still the same – be nice and honest, and wait for the boy to sort out his important boy things then whisk you away to a life of blissful conditional self-acceptance, you silly thing.