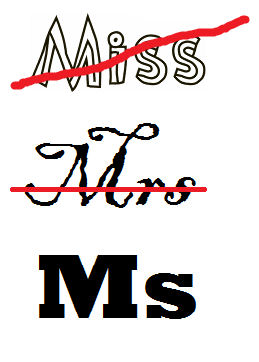 My first ever experience of the ‘alternative’ female title ‘Ms’ was in the early part of secondary school. It was widely speculated that my yoga and art teacher was a lesbian. At a parents evening, a father asked why her title was ‘Ms’, to which she allegedly responded that it stood for ‘Mr’. Quite what really happened, we’ll never know, but from that day I learnt that ‘Ms’ stood for ‘lesbian’.

Incidentally, it was only when I was in my first lesbian relationship that I began to question my status as little Miss. It was only after I became what my mother would describe as militant that I started to correct everyone who assumed my title was Miss.

The longest saga has been with my bank. Ever since I opened my account and my personal banker automatically put Miss, I have been trying to change it to my correct title, Ms. The request to change my title is always met with a sigh, rolled eyes and a slightly cooled atmosphere.

“Are you divorced, Miss Single?” Well, no.

For a long time, I used to try and belittle the importance to me, and would say it didn’t matter, that it was only silly, and a purely aesthetic change. I would undermine my own feminism, to avoid feeling awkward and avoid being associated with what I then considered to be a negative stereotype. I didn’t want them to think that I had hairy legs, or lived on a diet of mung-bean stew. Strangely most of all, I didn’t want them to think I was some sort of lesbian. Not that I have ever had an issue with being ‘out’, but because I didn’t want to conform to what they thought a Ms should be like.

The issue does not relate to my disdain for body hair or mung-beans, as both play an important part in my life. It’s because these things aren’t the reasons why I am a Ms. In fact, they bear no relation whatsoever. I’m a Ms because I refuse to be defined by my relationship to a man. Or a woman as it happens.

Some people may argue that titles are antiquated in themselves, that it should be irrelevant whether you are a Mr or Ms. I empathise with that sentiment very much, and feel acutely aware of the detriment of gender binary attitudes. Part of me would rather remove the title system altogether. My issue is, I am extraordinarily proud of being a woman. Being female is an important part of my identity. I want to be Ms Independent.

It is widely thought that Ms was thought up in the US in the 1970s, as a brainchild of the feminist movement. However a little research indicates that it occurs in documents from as early as the 1700s. To modern sensibilities, defining a woman as ‘The Mistress of Husband’ or ‘The Mistress of Father’ does seem a little strange. For many husbands, a wife’s rejection of ‘Mrs’ or the male surname feel like a slight against his family – the actions of Ms Awkward. My father died a few years ago, but I’m fairly sure he would balk at the suggestion that I belong to him until some innocent man was absent-minded enough to shack up with me. As it stands, I’m not entirely sure I want to be defined as a possession of a dead man. As much as I love him, it’s very strange indeed.

When I have corrected important documents at work with my correct title, I have been made to feel petty, insecure and unnecessarily political

Aside from the patriarchal ‘ownership’ chestnut, I don’t want to be a Miss anymore. Much to my dismay, I think I am a grown-up now. ‘Miss’ brings with it a whole host of connotations that I would rather not be attached to. It implies weakness, subservience, inferiority, incompleteness. If I was going to carelessly wield stereotypes around I would say that I would much rather be the scary, hairy Ms Muff-Muncher than Little Miss Training Bra.

My indignation to ditch Little Miss Victim has left me with a bitter taste in my mouth. I feel an overwhelming sense of shame for giving a shit about what anyone thinks. So what if someone thinks I am a young, unmarried woman – last time I checked, I was? Have I just got ants in my pants about being a young, single female in a male-dominated working world? Is this just my special little way of demonstrating my super-strength of character in this strange rat race?

The answer to the above questions is, most probably, yes. But being a Ms is not necessarily the easy choice. While reading around the topic, I came across studies that suggested that people are less likely to trust women with the title Ms. This wasn’t about lentils, leg hair or lady-loving… it’s about rebellion. It seems that for some people, I make an overt, daily statement about my rejection of (a patriarchal) status quo. When I have corrected important documents at work with my correct title, I have been made to feel petty, insecure and unnecessarily political. I am sure this is a very typical example of how many people try to squeeze these little acts of feminism out of young women. Over the last few years, I’ve have grown ever confident in my response to those who try define my title for me. Sexuality, fashion and diet aside – I am a Ms because I belong to me.

Nowadays, I take great pleasure in the fact that every time I write my name, I am reminded of how far women have come – and how far we still have to go.

Amelia Sage lives such a severely over-caffeinated existence that she could die at any minute. Until then, she spends her time ranting about all the things that all the other over-educated, liberally-minded, socially-responsible, ecologically-conscious feminists rant about