Cuts? Women will take them on the chin

On the morning of Wednesday 20 October if you Googled “women and cuts” you got ads for hair models on Gumtree and the latest special offers from Toni & Guy. By Friday of the same week that very same search would tell you that, of the £8.5 billion which the government plans to raise by cutting direct benefits to individuals, two thirds will come from women’s pockets. A lot can change in a day.

Yvette Cooper says that changes to rules on childcare and working tax credit could force mothers who want to continue working – and already earn significantly less than men – to stay at home. Quoted in The Guardian, the Shadow Foreign Secretary, describes the comprehensive spending review as “the biggest reversal of women’s opportunities and economic independence” since World War 1.

It’s not only reductions in benefits and tax credits that will hit women hard. Cuts to public services will hurt too. Outraged Tweets abound at the news that two thirds of the 500,000 public sector workers about to lose their jobs are women, but there is more to it than that. The fact is women tend to rely on public services more than men, and will feel their loss more acutely.

A few weeks ago I went to my local family planning clinic (which used to open twice a week from 6.00-8.30pm and was always over-subscribed) only to be told that it had closed and from now on I would have to go to the GP for contraception. This money-saving initiative leaves working women like me with the choice of taking time off work to get repeat prescriptions of the pill or dealing with unwanted pregnancy.

As a woman you might be inclined to wonder whether things could get any worse. Unfortunately, those of us working in the women’s sector can already tell you that the answer is yes.

I recently started work as campaigns officer for a tiny London-based charity called the Iranian and Kurdish Women’s Rights Organisation. On my first day, I found out that we’re in the running to lose a massive chunk of our funds. Why? Because of the hidden cuts – the ones that will be made by local authorities who’ve been told by Chancellor George Osbourne to reduce spending by 26% over the next four years.

In most parts of the UK, the local authority cuts will take a while to sink in. London will be hit early because the borough councils here, guessing what they were in for, began to act well before the comprehensive spending review on October 20. Back in September they announced proposals to cut funds to 31 organisations working to prevent violent crime, the majority of them focused on domestic violence, rape, sexual abuse, prostitution and trafficking, through the London Councils Grants Scheme. I spent my first month in the job taking part in consultations and writing to councillors, trying to persuade them that cutting funds for violence against women services in London is a bad idea.

The implication is that if you’re a rape survivor or a woman who wants to leave a violent partner, you’re just not that important

At IKWRO we help Middle Eastern women who are facing forced marriage, ‘honour killing’, female genital mutilation and domestic violence. We’re already worried that cuts in public services such as policing will result in lower levels of protection for our clients and even fewer prosecutions for the kind of crimes that affect them.

Not one person has ever been prosecuted under laws which ban FGM in this country and the Metropolitan Police have over 100 unsolved cases of ‘honour killing’ on their files. It’s pretty worrying in this context to think that Britain is about to lose 10,000 police officers. We’re even more concerned that we could lose our London Councils grant which totals £30,000 per year up to the end of 2012. With just five full-time staff and two part timers, this is not funding that we can afford to lose.

Other organisations are similarly desperate. London Councils has also withdrawn its pledge to fund three new rape crisis centres in Redbridge, Ealing and Islington. As a result the Redbridge and Islington centres may not be able to open, and women living in north and east London who need rape crisis services will still have to get themselves to either Ealing or Croydon on the other side of the city. Would you want to spend an hour and a half on the tube when you’d just been raped? Neither would I.

Of all the councillors I’ve written to only one – Steve Greening from Islington – directly addressed the issues I raised. The remaining responses simply stated that in these difficult times councils want to focus “on local priorities”. I desperately hope that these priorities will include the work of organisations like IKWRO and Rape Crisis. If not, then the implication will be that if you’re a rape survivor or a woman who wants to leave a violent partner, you’re just not that important.

Yet as far as equality and the cuts are concerned, it seems like quite a few councillors just don’t want to know. The vast majority didn’t even reply to our letters. 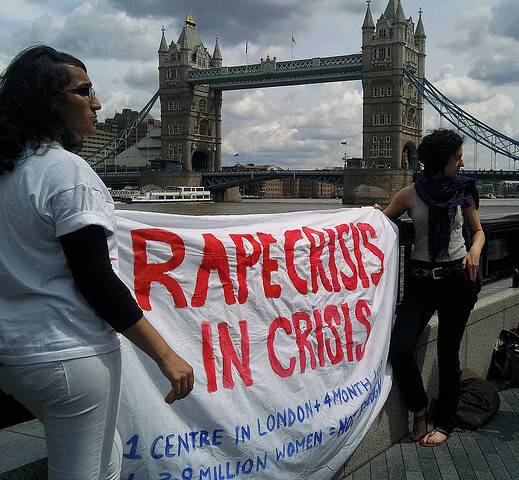 At a recent meeting of the London Councils Grants Executive, several members (all of them middle-aged white men) argued against doing an Equality Impact Assessment – despite the fact that they are about to cut a wide range of services aimed at improving life for people on the bottom of the pile.

Infuriating as that might be to those of us who actually care about equality, I doubt this position is very far from where the coalition government stands. No such assessment took place before the emergency budget cuts announced by the Chancellor George Osbourne back in June, which involved axing the Health in Pregnancy and Sure Start Maternity Grants as well as reducing Child Benefit and freezing public sector pay, all of which affect women more than men.

A legal challenge by the Fawcett Society (court hearing pending) ensured that an assessment – which is required by law – did take place this time around. Oddly, this pre-spending review assessment didn’t flag up any negative consequences for women despite the fact that the cuts to jobs, benefits, tax credits, public services and local authorities will all hit us disproportionately.

But perhaps more worrying than the cash that will disappear from women’s purses is the way in which the current political context has reopened old conversations about working mothers and women’s role within the family. Last month, for example, coverage of the child benefit reforms was dominated by stories about women who stay at home to raise their children being ‘punished’ with withdrawal of this money because their partners earn more than the £45,000 limit.

The real issue was how much households earn, not whether women are in paid employment, yet the media managed to pollute an important discussion about what’s fair with moral undertones concerning women’s personal choices. The coalition, jumping at the chance to avoid answering the real question, responded by promising tax breaks for the married. All of a sudden public school boys were popping up on Question Time, preaching about the benefits of marriage – also a matter of personal choice. As Yvette Cooper’s comments in The Guardian suggest, there is a bit of a recurring theme.

How long until we realise that we have to fight this battle for ourselves?

So now for the important question : are women in Britain sticking up for themselves? Apart from the usual suspects – Guardian journalists and the Fawcett Society – and a few ruffled feathers on Twitter, we’ve been remarkably quiet so far. Is it because we all agree with what’s happening? It can’t be!

I suspect denial is part of it. After all, the Conservatives went all out to get women’s vote during the general election, aided by a female-headed PR company named Pretty Little Head. Apparently quite a few of us voted for them. Perhaps, having succumbed to David Cameron’s charms (whatever those may be) and voted Tory, many women now don’t want to accept that they’ve been jilted. We don’t want to believe that the nice man, who promised us the world, really only wanted us for one thing – our vote.

At the same time I think that many of us want to like the straight-talking Equalities Minister Lynne Featherstone and to believe that she’s a friend who’ll fight our corner, even if all those besuited men in the cabinet have left us out in the cold. But how long until we realise that we have to fight this battle for ourselves? And who will be leading the charge?

Working mums, women on a low income, and women and girls who are dealing with domestic violence or other problems, should be up front in this campaign, but many of them are already under pressure which will only get worse as the cuts bite, leaving little time for activism. That’s why it’s vital that anti-cuts campaigners find ways to ensure that these women can make their voices heard, by creating meaningful opportunities for them to engage with decision makers including actions that won’t take up too much of their time.

As for the rest of us, does the fact that we’re not directly affected right now justify doing nothing? No, it doesn’t, because as women we can’t sit back and ignore the erosion of our rights and choices. This government is clearly a little out of date when it comes to the issues which women in modern Britain face. And if we don’t put them right, who will?

The Iranian and Kurdish Women’s Rights Organisation is a registered charity which provides advice, support, advocacy and referral to women and girls of Middle Eastern origin. Our advisers speak Arabic, Kurdish, Turkish, Dari and Farsi and each year we work with more than 1,200 women and girls who are facing ‘honour’ based violence, forced marriage, female genital mutilation and domestic violence.

Fionnuala Murphy is campaigns officer at IKWRO and is currently fighting to save IKWRO’s London Councils funding. In 2011 IKWRO will launch a campaign calling for a national strategy to prevent honour killing, protect women at risk and prosecute offenders. Get all our latest campaign news on Facebook and Twitter