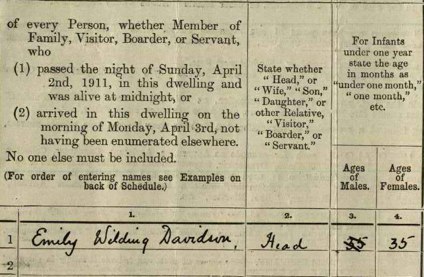 I’ve been hiding in the cupboard for the past hour. It’s cramped, slightly musty (old trainers), and I have the overwhelming feeling that I own far too many t-shirts. Hiding in a cupboard loses its sense of fun when you’re in your 30s – backache and boredom are the overriding experiences. Even my daughter has lost interest in finding me and has toddled off to pull dirty clothes out of the washing basket.

I should qualify that sentence by a stating that a) my daughter is only 15-months-old, and is therefore prone to doing those sorts of things; and b) I’m not the only adult in the house, so she’s unlikely to do too much harm either to herself or her surroundings while I’m cupboard-bound.

It’s not for fun that I’m doing this though – I’m trying to gain a sense of what it was like for Emily Wilding Davison, the famed Suffragette, when she hid in a broom cupboard in the Chapel of St Mary Undercroft, in the crypt of St Stephen’s Hall, on the night of 2 April 1911. Those of you unfamiliar with her name might ask why do this? The answer lies in the census.

When the 2011 census enters our lives next March, dressed in a white envelope with a big purple C printed on it, a snapshot will be taken of the population as it stands on 27 March – census day. Aside from 1941, a census has taken place every decade to count the population, households and other aspects of society, with the data being used as a cornerstone for planning the country’s future. The 1911 census, like all the censuses before and since, asked people to complete their questionnaires on a certain date so that snapshot could be taken. That date was 2 April.

So Davison spent the night in that broom cupboard so she could legitimately state that her place of residence on census day was the House of Commons. It was a simple yet daring deed by a suffragette who was renowned for her militancy.

2011 marks 100 years since Davison staged this act of defiance. Her actions on the 1911 census day had long been a rumour (not least because her conscientious landlady, at her rented flat on Coram Street in West London, filled in Davison’s details even though she wasn’t home). But the early release of the 1911 census data (the information gathered from the census is usually kept confidential for 100 years) revealed that she was included on the census return from the Palace of Westminster and did indeed partake in this rebellious act.

The 1911 census came at a time of civil unrest. The Suffragette movement was nearing the peak of its activity, and, as votes for women seemed no closer, militancy was now becoming an inevitable option. People were starting to take the ‘Deeds not Words’ slogan used by the Women’s Social and Political Union (WSPU) seriously.

Hunger strikes were organised in protest at the continuing arrest of Suffragettes, and the authorities responded by force-feeding the women activists they imprisoned. The controversial Prisoners (Temporary Discharge for Ill Health) Act, otherwise known as the Cat and Mouse Act, was still two years away, but the signals were there – neither the government nor the Suffragettes were willing to give any ground.

Many people involved in the Suffrage movement saw the 1911 census as an ideal way to attack Herbert Asquith’s fragile Liberal government. More than any census in the past, the 1911 census asked questions concerning women. These specifically related to fertility, asking women to record the “Total Children Born Alive”, “Children Still Living” and “Children Who Have Died”. This line of questioning linked directly to concerns about the effects of a declining birth rate since the 1870s, and was a response to the eugenics argument. 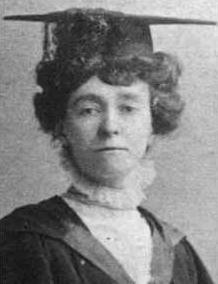 The census offered many of the people who were both active and sympathetic to the Suffragette movement the opportunity to take part in mass passive resistance. And, when it came to the night of 2 April, Suffragettes and their supporters protested in different ways.

Many avoided having their details entered on any questionnaire and, although it’s impossible to know exactly how many did this, it’s estimated that thousands of women were not listed. Some avoided their homes for the night, others simply refused to complete the questionnaire or instead wrote comments in the margin. One member of the Women’s Freedom League wrote: “If I am intelligent enough to fill in this paper, I am intelligent enough to put a cross on a voting paper.”

Laurence Housman, playwright, writer, illustrator and founder of the Men’s League for Women’s Suffrage, gave his home over to a group of Suffragettes on the night of 2 April (the entry for Housman’s address on the census questionnaire stated that there were “a quantity of females, names, numbers and ages unknown” present that night). He summed up the protest as “a useful bit of peaceful penetration into skulls which had hitherto remained offensively impervious to argument”.

Davison was building up a fearsome reputation at the time. She rarely gained permission for her actions from the WSPU leadership, and she was often considered to be engaged in an unauthorised and independent agenda of militant actions. Given Davison’s militant history, it was unlikely she was going to do something quite as passive as the rest of the Suffragettes on census day. She had put pacifism to one side two years previously. By the census year of 1911, she had started to build up an extensive criminal record.

She was sentenced to one month in prison after attempting to hand a petition to the Prime Minister, Herbert Asquith, in March 1909. After that, she was in and out of prison regularly for obstruction and stone-throwing offences. In fact, five months before she hid 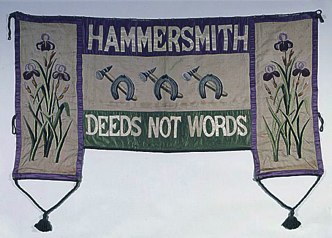 in the House of Commons on census day, she had been arrested for breaking the very same building’s windows.

So when the rest of the Suffrage movement was planning their nights away from home, or deciding what was the best form of protest statement to write on the census questionnaire, Davison was plotting a more inventive form of civil disobedience – one which took almost 100 years to come to the country’s attention; one which involved simply hiding in a broom cupboard and then waiting out the night.

Davison’s census protest will always be overshadowed by the events which led to her death, two years later. The reasons why Davison stepped in front of King George V’s horse, Anmer, at the Epsom Derby on 4 June 1913, are much debated. Was it martyrdom? Was it a protest that went tragically wrong (her return train ticket suggested she meant to leave Epsom)? It’s an argument for professional and amateur historians alike.

But what is now known as fact is that she snuck into the House of Commons and hid for the night on 2 April, 1911. It was an act which led Tony Benn to place a commemorative plaque on the broom-cupboard, which included the line, “a modest reminder of a great woman with a great cause who never lived to see it prosper but played as significant part in making it possible”.

David Standen is a freelance journalist who usually writes about music. He is currently working on the 2011 Census. He is a rookie when it comes to hiding in cupboards, but for the sake of a feature, he’ll usually try anything