She was the only Muslim girl to take such a strong stance, in a comprehensive school with a large Muslim population. She suffered evil taunts as a result. Her parents had not wanted her to dress this way, warning her she might rouse such a response, but she remained adamant this was something she wanted to do. I teased her that she would never have to worry about what to wear to school. She could wear pyjamas and no one would know.

It seemed her decision was more political than personal. She felt stigmatised by society, due to the label ‘terrorist’ being attached to all Muslims. She felt she was proving religious allegiance to her faith. Demonstrating she wasn’t afraid or ashamed, but proud to be a Muslim, she believed it the only form of resistance she could take against a society that was labelling members of her faith terrorists.

From an early age I was taught to believe the most important value to maintain was my responsibility to honour the family name, and my duty to always behave in a respectable manner. My father is Iranian, he grew up in Iran, but has spent the majority of his life in England, where he has maintained a strong Muslim identity. My mother is English. These traditional Muslim values have been instilled in me.

The most prominent of these values was impressed upon me prior to my leaving to study away from home at Warwick University. I was informed of the importance of forever honouring the family name. In other words this means, I must be careful with my new-found freedom not to bring shame upon him or his name. That I should consider myself different to others, and that I should conduct myself in a respectful manner at all times.

I am hiding behind a veil of moral codes. Expectations like these are common; many girls and women brought up in a Muslim environment are taught the value of honour. However, I have not been forced to wear a chador or the more modern practical equivalent of a manteau, which is an ankle length coat worn in Iran instead of a chador. Instead I have been instilled with traditional Iranian values, and take pride in attempting to maintain them to the best of my ability, as far as a modern society permits. I don’t see this as a hindrance or debilitating, it is part of what makes up my cultural identity.

Women who do choose to cover themselves in a similar fashion are stereotyped, especially in such an ‘Islamophobic’ society. They are falsely accused of suffering from oppression, concluding they must have been forced into wearing it. My experience is quite different.

They make a statement to society that they are different, and not ashamed of their beliefs. I envy them, they are much braver then me

When my Iranian grandmother came to stay with us, she felt so comfortable wearing the chador that she continued to wear it in the UK. Her faith didn’t change now that she was out of Iran where it is compulsory to remain covered, it was her personal preference to continue to wear it in England. I remember how she would reach for it when we were at home and someone was coming to visit, or when we wanted to take a picture of her. It had become such a part of her that she felt naked without it.

With Belgium having already banned the Islamic veil and France set to follow suit, it seems a rare occasion when this topic isn’t discussed. I wanted to understand how women feel when wearing the manteau before drawing to a conclusion on women who decide to cover themselves in western countries. For an experiment, I decided to wear a manteau for a day whilst shopping in my local mall. As I live in the east end of London, which has a strong Muslim population, I knew I would not be out of place.

Before putting it on I tied my hair back off my face and secured a scarf around my head, careful to hide all my hair beneath the flowery cloth. Then I put on my black, gold-buttoned manteau which supported rather widening shoulder pads, and finished the outfit off with my matching black and gold bag, and thick black tights covered by a pair of black boots. On the outside I was a perfect picture of Muslim modesty. I stepped out of the house rather stiffly at first, feeling as though I was joining a secret society I didn’t quite belong to, or deserve to be a member of. 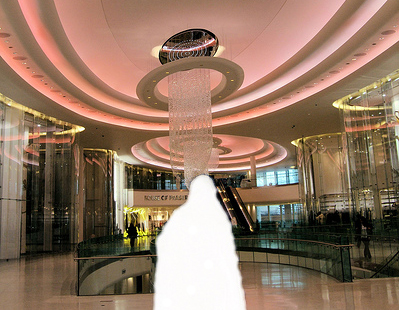 What I found so different from my normal shopping experience was that I went vastly unnoticed. That was the beauty of it. I have to admit as a young woman walking alone I often get car horns sounding as I walk down a street, or eyes following my behind, even the occasional smile possibly followed by a chat-up line.

Unfortunately I also have had more terrifying experiences of sexual harassment – I have been groped in the street and on one occasion ran for my life to get away from an older man who I felt had been following me on my route home on the underground. This is regrettably something most women experience at some point in their lives.

Unsurprisingly, no one approached me, no comments were made, I remained a mystery. I received a few glances and looks of curiosity, but suffered no distractions whilst on my shopping mission, and it was a welcome change. I soon relaxed and wandered around the mall, admittedly a little more aware of my surroundings and watching the response I received, but I was not made to feel like an impostor, neither did I receive any evil taunts. I was satisfied I had passed as a young Muslim woman and no one had challenged my right to cover my body.

I can understand why a woman would decide to cover herself with the manteau. It not only frees her from an enslavement to follow fashion, but also prevents her becoming the object of sexual attention. Personally, it made me feel much safer. Moreover, instead of women being judged for their physical appearance, these women are demanding their opinions and beliefs be heard. They hope to be recognised as a person rather then a piece of meat to be judged before it is sold.

Simply by wearing the manteau they are making a political statement, establishing the strength of their allegiance and faith in Islam. The manteau, it seems, can become a woman’s best friend. It serves as a shield to the sexual harassment she is liable to fall prey to when physically exposed, and allows her to voice her opinion symbolically as represented by her code of dress. Hence, I gained even greater respect for these dark angels, who sacrifice some physical individuality to ensure they are distinguished from others for who they are, not what they look like. They make a statement to society that they are different, and not ashamed of their beliefs. I envy them, they are much braver then me.

As long as our choice of dress is based on our own personal preference, and not concerned with seeking approval from those around us, then our choices are evidence of freedom, not oppression

My father often teases me when I’m dressed in typically western fashion, which tends to be tight, or at least a lot tighter and revealing than the manteau, “aren’t you going to put some clothes on before you go out?” My form of dress is normally no more radical than any other 20-something young woman. However, because of his culture, if I wore the manteau he would feel happier that I was projecting a more ‘dignified’ manner of dress, and be impressed by my devotion to my political beliefs, which he agrees with and would strongly support.

Nevertheless, I have to admit I also began to look with envious eyes at the women fashionably dressed. I missed the bright choice of colours and styles of clothing. I felt disappointed knowing that no one could see the way I chose to express myself underneath my loose black manteau. Maybe the exhibitionist within me would become benign, and I might resign myself to showing off a new original ensemble of clothes at home with my family, where there was no risk of being teased or harassed. But I can’t help thinking, does this not just remove the responsibility from the perpetrator onto the victim to guard against temptation?

It is an inescapable fact that we are judged by our appearance. What then can be said of those that choose to wear the full Islamic code of dress, but decide to personalise it? I have seen beautifully bejewelled numbers, vibrant colours and even a see-through manteau, which served to do no more than titillate considering the provocative underwear being worn underneath. Is this merely a creative interpretation or does this defeat the object? I’m not entirely sure. I believe that we have a right to dress as we please. I do not think this should be dictated.

However, I can understand the argument that, if we were to visit countries like Iran, we would have to wear the Islamic code of dress. Therefore, is it not fair that anyone who enters into a western country should dress as those around them? I suppose the beauty of democracy is the power to parade around in any get-up we see fit. However, we cannot deny the fact that the way we choose to present ourselves will naturally form part of how we are perceived by society.

With that in mind, can we assume a woman who chooses to dress more scantily clad than a woman in a manteau is any less modest? Certainly not. If we are ever to rid ourselves of this preoccupation with stereotyping a person by their appearance, there must be no restrictions. As long as our choice of dress is based on our own personal preference, and not concerned with seeking approval from those around us, then our choices are evidence of freedom, not oppression.

Roxanne Bibizadeh benefits from traversing the boundaries of the east and west, being a mixed race ‘other’, of dual heritage – English and Iranian. At present Roxanne is writing her first novel, which deals with racial diversity in London