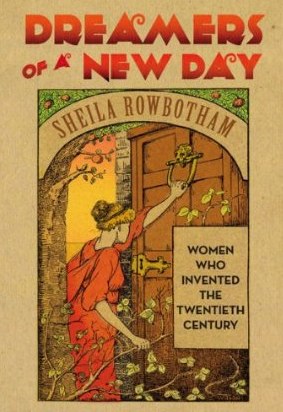 Dreamers of a New Day: Women Who Invented the 20th Century

In 1914, Marie Jenny Howe, the creator of the Greenwich Village Heterodoxy Club, said:

Feminism is woman’s struggle for freedom. Its political phase is women’s wish to vote. Its economic phase is woman’s revaluation of outgrown customs and standards… Feminism means more than a changed world. It means a changed psychology, the creation of a new consciousness.

Over the previous 40 years or so, women from all walks of life and on both sides of the Atlantic had been beginning to question their roles in life, the home and society in general, and were starting to imagine ways in which their lives could be improved and how those improvements might be accomplished.

It was a mammoth task, and it is a mammoth project that renowned historian Sheila Rowbotham has taken on in documenting the many and varied imaginings of this “new day”.

Organised thematically, Dreamers of a New Day: Women Who Invented the 20th Century examines and discusses the many and varied movements, groups and individuals that envisioned and worked towards a feminist future.

The first chapter deals with ‘Adventurers in the Everyday’. Alongside women in the burgeoning socialist, anarchist and communitarian movements who rejected the domestic sphere and all that it represented to them, there were women who joined temperance unions and who appropriated ideas of motherliness and housekeeping for extension into society at large, who believed the mother role showed that women should be the moral gatekeepers of society, rather than have to live within a male-dominated framework.

This wasn’t just happening in Britain and middle-class, White America: many African-American women “were inclined… to associate the domestic redeemer… with ‘uplifting’ the race”. Rowbotham uses the example of Mary Church Terrell, leader of the National Association of Colored Women, who expressed this idea at the National Woman Suffrage Association conference of 1898.

This moral position reflected the work that African-American women were out there doing to help their people: excluded from many White charitable works, Black women worked incredibly hard at their own social welfare projects and social settlements. As Rowbotham says, “providing services for everyday needs could be linked to campaigning for change.”

It’s the inclusivity and breadth of this book that makes it so fascinating. In the same way that she looks at the variety of ways that domesticity was subverted, appropriated, or rejected, she discusses sexuality, marriage, the world of work and the rise of capitalism, female identity, lesbian identity and the politics of women’s clothes.

Particularly interesting for me was the contrast between the ways that clothes were used by different groups of women. White, middle class women – particularly within the suffragette movement – found that dressing exactly how society expected them to meant that they could access meetings and groups where they could then start smashing windows, shouting and hurl axes at politicians.

It is humbling and inspiring to look back at the women who took those first steps – some tentative, some strident

Meanwhile, working class women and some African-American women wanted to assert their value as women by dressing up in fashionable clothes that society at large thought didn’t belong to their class and/or race. Lastly, the New Women – the fin de siècle movement of feminists, many of whom were novelists and artists – shunned feminine dress altogether, taking on a masculine appearance in a bid to hold ideas of gender at arm’s length.

Rowbotham chooses to describe the women documented in this book as “adventurers”, and rightly so, because here were women from different backgrounds, races, classes, moral standpoints and political movements who all wanted change, and who all had the foresight and ambition to be able to imagine what that change, that freedom, that “new day” might look like.

Not everything they set out to do was successful, and we know all too well that over 100 years later we still don’t live in a post-feminist, post-racial, post-classist world, it is still humbling and inspiring to look back at the women who took those first steps – some tentative, some strident – towards creating the new consciousness talked of by Marie Jenny Howe.

Dreamers of a New Day is an extraordinary book, and must surely be essential reading for anyone who wants to know more about the history of feminism.

Kirsty Doole is a Glaswegian who now lives in Oxford and works in publishing. She loves books, feminism, cats and Victorian history, and if she found a book that included all of those her head would probably explode with joy