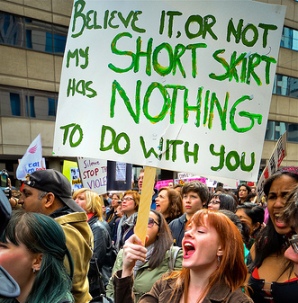 [Photo of people marching in Slutwalk Toronto, focusing on a placard reading “Believe it or not, my short skirt has NOTHING to do with you”.]

Slutwalk London is an anti-rape march taking place on Saturday 4 June in London. According to the organisers, the first Slutwalk took place as a response to a Toronto policeman telling a group of law students that in order to avoid being raped “women should avoid dressing like sluts”. The event aims to challenge the default social position of “Don’t get raped” and replace it with “Don’t rape”, taking the focus off the victims by showing that what they wear/dress/say/do prior to being raped is irrelevant: rapists choose to rape, and changing our behaviour as women won’t stop that. In this spirit, the organisers encourage people of “all genders, races, ages, religions and sexualities” to join the march and “raise your voices, hemlines and heels against a violent culture that blames the victims of rape”.

I fully support the sentiment behind and the aims of the event, and think this approach actually makes more sense than a “reclaim the night” march in some ways, given that the focus on “night” – for me at least – inadvertently reaffirms the idea that the streets at night are dangerous for women, when those of us who attend RTNs all know that women are statistically most at risk of violence in our own homes with men we know, and young men are actually more at risk of violence on the streets.

However, unless I was in Toronto where the march was a direct response to a comment about “sluts”, I personally wouldn’t feel comfortable walking under the label. I have no interest whatsoever in reclaiming or reinventing a word that is used to attack and label women, let alone use it in reference to myself. I don’t tend to wear the kind of clothes deemed “sluttish” and I feel massively uncomfortable with the whole “fuck you I can wear heels if I want to” attitude because I view heels as painful and restrictive and there’s so much pressure on women to dress hyper-feminine anyway that it seems pretty self-defeating to me. I totally see the logic in this context – “fuck you I can wear heels and it’s STILL his fault if he rapes me” – but it’s just not a space I can get involved in without pretending to be someone I’m not. I’m afraid the idea of showing the world that “slut is something to be proud of” just makes me cringe. I’d rather be myself and reject all the bullshit labels society might throw at me.

So, I won’t be there (I know, disaster!), but if this sounds like the march for you – and I know some feminists do see value in reclaiming “slut” – then head down to Trafalgar Square for 1pm on Saturday 4 June. “Friends, family, banners, food and instruments” all welcome.

Photo by Anton Bielousov, shared under a Creative Commons licence.