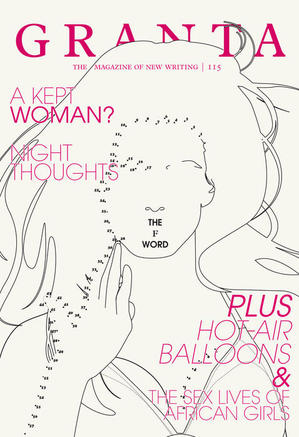 From Rachel Cusk’s opening ‘Aftermath’, which has recently been acquired by Faber, right through to Jeanette Winterson’s tedious finale, we are presented with women defined by their domestic identity – wives, ex-wives, mothers, daughters, lovers, kept women – the works. While Cusk examines her role in a family unit, Francine Prose bemoans second wave feminism and her philandering ex-husband. Self-indulgent narratives such as Winterson’s witter inanely on about sex and love – ironic considering feminists spend their lives complaining about being sexed by a patriarchal society. Other contributions in this issue are autobiographical anecdotes which dredge up a history of inequality; A.S. Byatt, feminist doyenne as she is, documents the exclusion of women in academia during and prior to the 20th century. Coming from “The Magazine of New Writing”, this is hardly “new” per se.

Perhaps it is partly the remit that’s flawed. Caroline Moorehead’s ‘A Train in Winter’, for instance, is a powerful and harrowing story about a group of French women imprisoned in Birkenau in 1943, but it feels criminally reductive to contort the experience of Holocaust victims to fit the frames of ‘feminism’.

Maybe, just maybe, it was too ambitious to hope for a sexual revolution to bring down a social structure reinforced by centuries of patriarchy – all in a paperback

The other gem for me was Taiye Selasi’s ‘The Sex Lives of African Girls’. Already bearing the iconic Toni Morrison’s seal of approval, Selasi’s short story is a brazen critique of the sexual abuse and exploitation experienced by many young girls. The title, ‘The Sex Lives of African Girls’, is succeeded by the first line of the story: “Begin, inevitably, with Uncle” – a disturbing initiation to an ultimately devastating conclusion. Selasi’s poignant story is squarely matched by her dazzling prose and makes for a stunning fiction debut. I’m now desperate to get my paws on a proof of her upcoming first novel, Ghana Must Go.

Despite these treats, this issue of Granta leaves something to be desired. More often than not, writers dredge up the same old arguments, air grievances in the same old ways and portray women in the same stereotypical manner which pop culture does ad nauseam. Moreover, there are far more creative ways to criticise the status quo than by simply whinging about it. But maybe, just maybe, it was too ambitious to hope for a sexual revolution to bring down a social structure reinforced by centuries of patriarchy – all in a paperback.

The feminist cocktail I had hoped for was a zingy, juicy, fruity daiquiri that packs a punch. Instead, I’ve had to settle for Granta’s slightly synthetic slush puppy with the odd strawberry thrown in for good measure. All in all, the underwhelming sentiment “not bad” resounds.

Iman Qureshi is a reader-writer-ranter extraordinaire and is interested in the intersections of gender, sexuality, race and culture. She’s lived in the middle east, Pakistan and the UK, and although she does not wear a burqa, she defends your right to do so. Iman loves a good feminist/racial harangue, but finds that her love for Disney occasionally compromises her staunchly Butlerian/Bhabhaian views