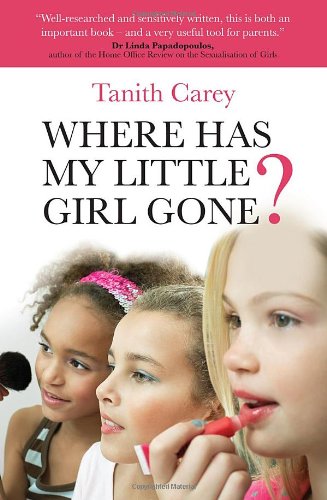 Where Has My Little Girl Gone?

“Padded bras for seven-year-olds, dolls dressed in high heels and pole dancing kits for kids” runs the blurb across the back. Enough to unsettle most feminists, especially a parent. And certainly we can’t possibly have anything to challenge from a book that’s all about teaching girls to question commercially-driven models of sexuality and helps them to become independent, confident women – can we?

Alas, it’s not that simple. Tanith Carey’s Where Has My Little Girl Gone? is a sadly conflicting publication, which tumbles together panicky accounts of tabloid-fodder ‘sexualisation’ stories with actually rather sound practical guides for raising healthy children with good self-esteem. The result is something that strays uncomfortably into both labelling girls as victims and victim-blaming territory.

Ultimately the existence of such a book seems to reinforce the system rather than shatter it.

The book starts with a massive shortcut, based on the argument that parents are worried and that’s enough, without examining whether this worry is really valid

Carey’s guide is split into three sections, with titles such as “Mum, Dad, can I have a nose job please? The rise of the X-Factor parent”. In fact that first section alone is deeply troubling reading for a whole number of reasons.

Firstly, because ‘sexualisation’ is never adequately defined. Carey evokes a mixture of age-inappropriate sexual awareness, and the objectification and commoditisation of women’s bodies. Certainly the latter are nothing new and arguably getting worse, if only in that they seem more shameless than ever, but conflating all these things – related though they might be – under one term is, as Laurie Penny argues, a “troubling piece of cultural shorthand”.

It’s true that often the examples given are disturbing, such as that of a seven-year-old pole dancer. But many are also of young adults – 18, or even 20 – who are women, not girls, and throughout the book there is the uncomfortable feeling of middle class women having a bit of a horrified yet titillated gawp at an isolated handful of extreme examples. They are, by the way, mostly taken from The Daily Mail, The Daily Telegraph or The Sun, which are not without their own problematic presentations of women and girls.

More importantly, the prevalence of such cases is not properly reviewed; indeed, how can they be in a publication which totals less than 200 pages? The book starts with a massive shortcut, based on the argument that parents are worried and that’s enough, without examining whether this worry is really valid. Here, I could easily repeat Jane Fae’s eloquent criticism of the Bailey review which just this week is courting massive media attention on this subject.

It’s certainly nothing new that messages about sexual and gender conformity are heaped on girls disproportionately to boys; still, there is relentless focus on parental fears over actually identifying the scale of the problem, whether it’s actually escalating and, crucially, whether children and young people as a group are actually absorbing the messages in the way we think they are.

As I was mulling over my review, I found myself having a very interesting conversation on Twitter about the topic of sexualisation with Dr Petra Boynton, who directed me towards some excellent links on the topic, including this Scottish Parliament report on sexualised goods aimed at children. It’s particularly interesting as it comes up with far less dramatic results and recommendations than the Home Office review on the sexualisation of children co-ordinated by Dr Linda Papadopoulos, which Carey frequently refers to (and Papadopoulos’ endorsement appears on the cover of Where Has My Little Girl Gone?). Furthermore, Carey never mentions the work of the Onscenity research group in this area, which tackles the topic without sensationalism.

But suppose Carey and co are right. Maybe the problem is growing. And if it’s not, there’s never been a shortage of misogynist, anti-woman, gender and sexuality conformist messages spewed at women of all ages. So, as parents, this book is exactly what we need, no? Err – no.

Papadopoulos’ report argues, among other things, that sexual imagery leads to sexual violence against women; it’s not a new argument and it’s not one many feminists would dispute. But automatically rushing to defend girls from it is problematic in all sorts of ways. Not only does it cast girls – and only girls – as victims, it then places the responsibility on them and their mothers (because despite a section on the importance of fathers, the book is aimed at mothers and all of the examples feature mothers) to offset this danger. The notion of boys being turned into monsters by porn and teaching girls to protect themselves from that seems not so far away from Nadine Dorries and her abstinence education for girls, making them the eternal gatekeepers of sex.

But shouldn’t any guide be for all children? If boys are being so appallingly conditioned by sexual imagery it is surely of paramount importance to train them in how not to be. That will certainly leave girls safer than before, and it won’t be by limiting or changing their behaviour, or trying to force an adult perspective on adolescent sexuality but instead by working to undermine a system that leaves women vulnerable to physical and emotional attacks solely because of their sex.

In fact, surely that – essentially feminism 101 – is what parents need to teach all their children?

In fairness, I must comment that the tips given are generally very positive and helpful. They encourage openness, praise and supporting girls to see their worth as more than their appearance. Some of the practical advice on safe use of technology is a good starting point for parents who do feel they need a helping hand – and don’t we all, sometimes? Interestingly, Carey claims that the methods are most effective during the key ‘tween’ years, despite the fact that the example she gives of her own children shows negative messages being bandied about long before that: three-year-old Clio announces “thin means you’re perfect!”

Dr Lise Eliot’s Pink Brain, Blue Brain and Cordelia Fine’s Delusions of Gender both suggest that actually parental influence is highly limited once children become part of an active peer group – at least in the context of gender conformity – which is a depressing thought. I hope, even while I doubt it, that Carey is right; and her father and I can be the defining influence in my child’s early life.

As a parent and a woman I appreciate that facing the enormity of an entrenched system of misogyny is overwhelming. It’s not surprising many are wondering what they can do, and are feeling distinctly powerless against a commercialised onslaught they’re told is coming for their kids. There is definitely a need for parents to be given guidance within the swirling maelstrom of sexist society, media panic and bad science, and certainly the culture of control over women’s sexuality is something any feminist strives to dismantle. I just don’t think a guide targeted purely at girls is the way to do it.