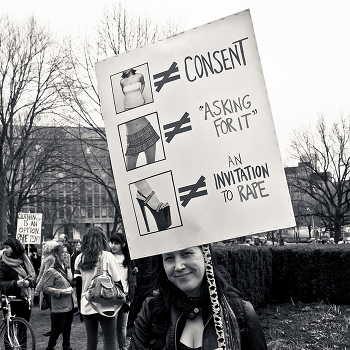 “Women should avoid dressing like sluts in order to not be victimised.” The Toronto police officer who allegedly uttered these words probably did not expect to inspire a wave of protests against a culture that blames rape victims for their attacks.

Neither, one imagines, did he expect to ignite a fresh bout of feminist debate about the politics of linguistic subversion.

Victim blaming is hardly news and the bias against the victim in cases of sexual violence is well-documented. So why are the SlutWalk demonstrations happening now? It’s not Shakespeare, but in its own way the police officer’s comment managed to crystallise the bewildering mass of statistics, victim’s stories, tabloid sneers and political blind spots that have preoccupied feminists for decades. This clumsy, bigoted sentence turned a depressing socio-political trend into a tangible thing: small enough to grab hold of, fragile enough to throw to the ground, clear enough to watch splinter into a thousand pieces, broken enough to stamp all over.

The women who organised the original Toronto SlutWalk understood that words are powerful weapons. But what kinds of weapons are words? Is the word ‘slut’ the equivalent of a gun or a bomb: a killing machine made by and for the patriarchy, impossible to redeem?

Some feminists commentators think so, and have lost no time in criticising SlutWalk for being more interested in stealing the master’s shiny tools than bringing him down. Gail Dines and Wendy J Murphy wrote in The Guardian: “Women need to take to the streets – but not for the right to be called ‘slut’.”

Jayne, in a balanced critique here on The F-Word, commented: “I have no interest whatsoever in reclaiming or reinventing a word that is used to attack and label women, let alone use it in reference to myself.”

But these feminist critiques of SlutWalk betray a tendency much more worrying than a simple misunderstanding. In a staggering assimilation of misogynistic language, Dines and Murphy state:

The organisers claim that celebrating the word ‘slut’, and promoting sluttishness in general, will help women achieve full autonomy over their sexuality. But the focus on ‘reclaiming’ the word slut fails to address the real issue. The term slut is so deeply rooted in the patriarchal ‘madonna/whore’ view of women’s sexuality that it is beyond redemption. 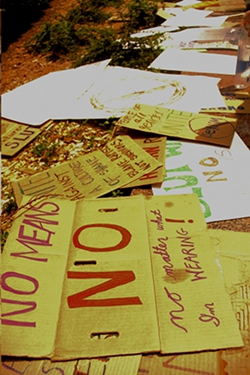 The writers are correct that the word ‘slut’ is rooted in patriarchal madonna/whore notions of female sexuality – but if they really believe this, why do they use the term uncritically? The feminist rejection of the good girl/bad girl binary acknowledges that each term is defined by its opposite. To dismantle the binary is to destabilise each definition: the madonna means nothing without the whore. Both words still exist, but their meaning now hangs in the balance and they can, effectively, be made to mean anything at all.

Reclamation is not running around shouting “I’m a slut as defined by the patriarchal capitalist tradition and I love it”, but celebrating the fact that the word ‘slut’ is now up-for-grabs because we no longer accept the terms on which it was defined.

It is instructive to compare this model of reclamation with Dines’ and Murphy’s use of patriarchal language. In their Guardian article, they caution against “encouraging women to be even more ‘sluttish'”, chastise the organisers “for promoting sluttishness in general”, and bemoan the fact that young women have been told “they must look and act like sluts”. I challenge Dines and Murphy to define their terms ‘slut’, ‘sluttish’, and ‘sluttishness’, because as far as I am concerned these words mean nothing. For these critics, words are no more malleable than guns, but they are content to turn these guns on the women they claim to speak for.

Women in short skirts are still being called sluts, even if ‘slut’ now means ‘betrayer of feminism’ or ‘victim of the patriarchy’, rather than ‘girl who is asking for rape’.

Reclaiming a word does not mean celebrating that word in its current form. It means tearing down the ideological underpinnings that give ‘slut’ its stability and laughing at ‘slut’ when it wobbles and falls

Dig deeper and another worrying trend emerges. Rosamund Urwin, writing in the Evening Standard, confesses that she will be attending the London SlutWalk in support of younger activists. Nevertheless, Urwin admits deep misgivings about the reclamation of the term ‘slut’:

Calling yourself a slut doesn’t reduce its stigma; it is like doing business with an evil regime. You are accepting a label that is intrinsically misogynistic, one that defines women by their sexual relationships and stilettos. 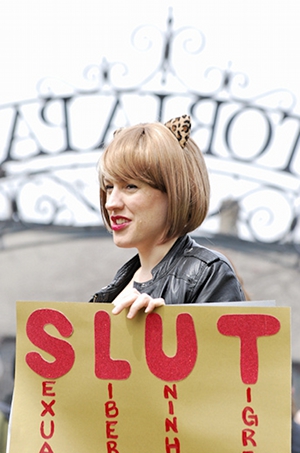 Here, the feminist reclamation of sexist words is nothing more than a shopping experience. Forget dismantling binary oppositions and relishing the radical indeterminacy of language: a word, according to Urwin, is just another commodity. So, if I refer to a hunk of cheddar cheese as a ‘slut’ in order to demonstrate the absurdity of the term, all I am doing is purchasing the word ‘slut’ from Patriarchy Inc. and degrading the poor hunk of cheese in the process. Is consumer exchange the only conceptual frame we have for discussing the way we use language?

The SlutWalk London Facebook page is riddled with comments from trolls pointing out that drivers lock their cars to prevent theft, ergo women should (no, not lock their vaginas) dress conservatively to prevent rape. There will never be enough time to puncture this claim in all its weak spots, but the assumption that women are analogous to cars deserves our attention. Some feminists have assimilated this logic, forgetting that it is possible to think about language and sexuality without figuring either as consumer items.

Reclaiming a word does not mean celebrating that word in its current form. It means tearing down the ideological underpinnings that give ‘slut’ its stability and laughing at ‘slut’ when it wobbles and falls. Beccy Pert, a co-organiser of SlutWalk Cardiff, told The Guardian: “We want to reclaim the word ‘slut’ and use it in a positive, empowering way.” There is a problem here too, common to much talk of ’empowerment’ and ‘positivity’. Reclaiming ‘slut’ should not be about celebrating the male-defined word as something ‘positive’, but celebrating the indeterminacy of the word when detached from its meaning. On 11 June, when SlutWalk comes to London, I hope we can turn ‘slut’ into sheer sublime noise, untethered, non-referential, absurd. We want this word in our court, but only so we can keep it in the air and over the heads of everyone who would use it against us.

Photo of woman holding sign explaining that clothes don’t equal consent, from the Toronto SlutWalk, by Brian Carson. Photo of signs from the Chicago SlutWalk by Gozamos. Photo of a woman on the London, Canada SlutWalk holding a sign with her redefinition of slut by Rick Carroll. All shared on Flickr under a Creative Commons license.

Sophie Jones is a writer and researcher living in London