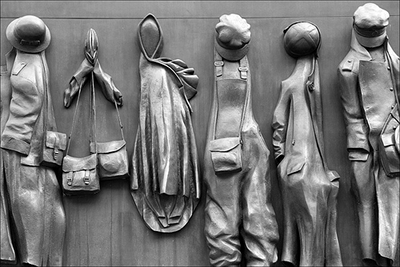 The only memorial to women’s contributions in World War II depicts empty clothing. Carolyn Dougherty considers what this says about the erasure of women from public spaces. With contributions from Alex Wardrop

Where are the public memorials to commemorate women’s contributions to our past? World War II looms large in the UK’s history, but you will struggle to find many sculptures representing women’s role.

The Paperwomen collective, founded in Bristol in 2010, aims to draw attention to, and in some small ways reverse, the erasure of women from history, specifically their absence from memorials in public places. While doing so it aims to celebrate the women who have contributed to our cities and our pasts.

The monument to the women of World War II commemorates ‘women’, but carefully avoids portraying any actual, physical women – only their empty suits of clothes

Since meeting Paperwomen at the Carnival of Feminist Cultural Activism in York, I’ve become more aware of how images of real women are absent from public spaces.

A striking example of this absence came to my attention recently, on the 500,000-strong March for the Alternative in London on 26 March. As we proceeded down Whitehall, the seat of political power in this country, past larger-than-life-sized bronze portraits of men who led and fought in World War II, I noticed this monument:

Dozens of statues in London represent the men of World War II, from Winston Churchill in Parliament Square to the generals that face the street on both sides of Whitehall. Even memorials that don’t commemorate specific people, like the Battle of Britain memorial or the Royal Tank Regiment memorial, portray the physical presence of men: 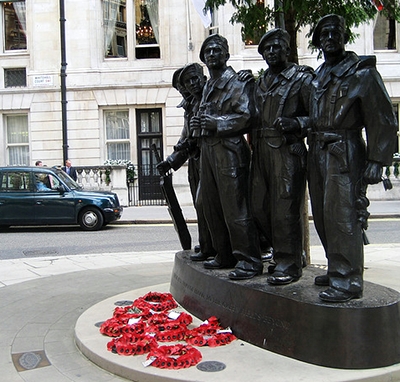 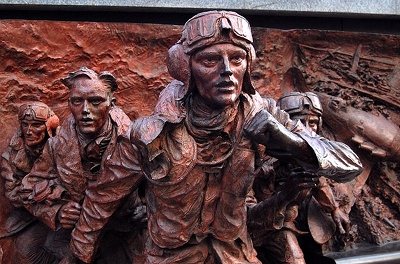 The monument to the women of World War II, in contrast, commemorates ‘women’, but carefully avoids portraying any actual, physical women – only their empty suits of clothes. I’m aware of only one statue for a woman war hero of World War II, Violette Szabo GC, and the monument on which her bust sits actually commemorates Winston Churchill’s Special Operations Executive, which organised agents working across enemy lines. So her face does not stand for herself, for Violette, but for the countless anonymous agents of Churchill’s ‘Secret Army’. 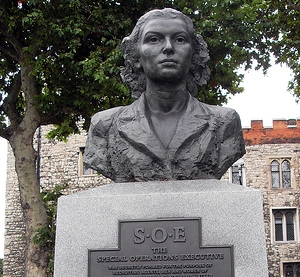 When I returned home to read about the Women of World War II monument, I was even more surprised to find that while it appears there was some controversy over its erection in 2005 (someone apparently wondered why a ‘women’s memorial’ was required if there were no ‘men’s memorial’).

When representations of weapons are more visible in our civic sculpture than images of women, what futures can we hope for?

No one seems to have recognised that an object meant to honour the acts of women so consciously erases these women from public space. The ‘Women of World War II’ memorial is a memorial to the continual erasure, denial, refusal to acknowledge women as actors in our physical, social and cultural history. It memorialises a politics of the past based on ideas of aggressive masculinity, conquest and violence which reduces the lives (and deaths) of women to symbols.

What does it mean that we refuse to physically commemorate, at the public’s expense, the women who have contributed to the fabric of the cities we walk through, with their names, their bodies, their faces? What does this say about our social relationships with the past, our relationship with remembering war and trauma? That women have no past? That to represent women as actual physical beings and not generic symbols is too dangerous, too disruptive, too threatening to the historical narrative of bloody battles, guns and imperialism?

When representations of weapons are more visible in our civic sculpture than images of women (who bear the brunt of ‘collateral damage’ and death in conflict zones), what futures can we hope for?

It is possible to represent the collective contributions of women without erasing their individual identities: as Susan Schwartzenberg and Cheryl Barton did it in their Rosie the Riveter memorial at the Kaiser shipyard in Richmond, California. This memorial includes the faces and words of actual women, many of whom were African American and Latina, who constructed ships during the war; it both recognises their wartime efforts and challenges and develops different ways of commemorating warfare and interacting with the past.

This is a memorial which challenges and develops different ways of commemorating warfare and interacting with the past.

The erection of symbols in someway creates and maintains a collective historical consciousness (call it civic pride, patriotism, memory, ideology or patriarchy). The fact that women’s bodies and names are barely represented creates a consciousness and a social identity where it is okay for women to be just not there. And, although Paperwomen began (and remains) a bit of a joke, this issue isn’t very funny, because it ultimately denies the presence of any body named ‘woman’ in that society.

So here’s to hoping that such a limited ideology will erode a little, along with the statues erected in honour of it.

Photo of Women of World War II monument by Rupert Ganzer, photo of Royal Tank Regiment monument by Jitze Couperus, photo of the Battle of Britain monument by Marney Reaney, photo of Violette Szabo memorial by nklajn, all shared on Flickr under a Creative Commons license

Carolyn Dougherty is a civil engineer, currently pursuing a PhD in railway studies at the University of York. Alex Wardrop lives in Bristol and is a founding member of the Paperwomen Collective