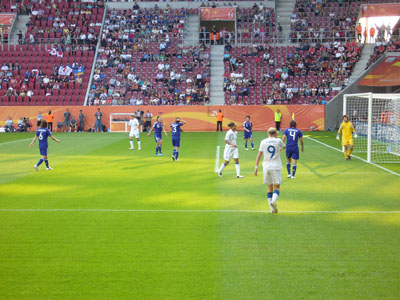 England knocked out of World Cup: where next for women’s football in the UK?

England were knocked out of the World Cup yesterday, losing 4-3 on penalties to France in the quarter-final.

Such stark words, and they hide a multitude of stories.

For example, the story that the BBC have been bragging that they have been behind England all the way in their campaign. Possibly. But they still didn’t schedule the airing of the quarter-final match on terrestrial TV, opting instead for a repeat of Porridge on BBC Two while golf was on BBC One. Their plan was for England v France to be shown on the red button, until hundreds of people complained (including some high-profile ones – cross-party MPs, for instance).

For example, the story that the media are always vaguely interested in successful women’s teams at big tournaments. They’ll run a few stories if it looks like there’s a possibility of a win, and as soon as they’re out of the competition, that’ll be it for another few years.

For example, the constant comparisons between the men’s and the women’s game (which infuriates England coach Hope Powell). It was exciting to see some of the players’ names trending on Twitter yesterday, until you realised it was only in relation to sexist comments and abuse. (One particular charmer was directly tweeting every single member of the England squad with exceptionally vile words.)

It’s tedious to keep reiterating how few of the England players have made a career out of playing football. Sure, many of them do now, but only since adulthood have they been able to concentrate solely on their game – many of them have degrees, or have been working part-time as well as playing, or have had full-time jobs and trained in their spare time. Talented boys are picked up as teenagers (or younger) and nurtured through the system, thinking only of their on-field skills; talented girls are spotted and tend to be fast-tracked through the international ranks because their early teenage years are when they have time to spend focused on football – after that, they need to consider how they are going to earn money.

Leaving aside the argument of whether or not it is healthier to be a more well-rounded human being with an education and off-field skills, there simply is not the same kind of money in being a professional footballer if you are a woman. The summer FA Women’s Super League launched this year, with a limited number of full-time contracts available for each club, alongside a wage cap; this was done in order to encourage competition and a spread of the top talent. Imagine if something similar existed in the men’s leagues.

At least the FA seem to be interested – finally – in promoting the women’s game. Although they infuriatingly persist in using the hashtag #englandwomen (I suspect they will not be hashtagging #englandmen during next year’s European Championships), they are organising events and are putting money into the long-term strategy for the FAWSL.

If you’ve enjoyed watching England during this World Cup, please continue your interest, and help to support women’s sport. You could:

And if you’re not a sports fan in general, I do urge you to give women’s sport a try – you may find the entire atmosphere very, very different.