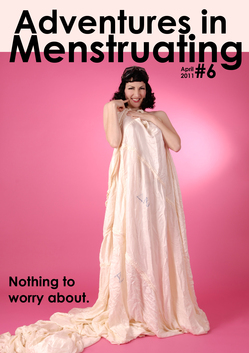 Chella Quint is best known on the zine scene for Adventures in Menstruating – a satiric look at feminine hygiene adverts that began with the 24 hour zine thing, which she talks about in a documentary by Rosie Stoker. The zines have glossy covers that spoof mainstream publications, and readers contribute things like comic strips, poems, interviews and ad analysis. The purpose of the zine is to demystify period taboos and find humour in places others fear to tread, or at least, as she says, tread while still showing respect to people who menstruate.

Chella’s a fellow Sheffielder (though she’s originally from New York), and we’ve bumped into each other at events like the Lib Demo and Sheffield Pride. I was aware that she had exciting things coming up, so I caught up with her to find out the latest on her zinery and comedy.

I had always planned that I’d sit down this summer and find all the back issues of Adventures in Menstruating and reprint them. I had no idea I’d be so busy with my other writing projects and then end up performing comedy at the Fringe as well, but I’ve finally done it. I’m launching the complete run again – issues 1- 6.

I’ve also recently reprinted The Venns: A Quest for the Perfect Pub Quiz Team, and I’m about to launch a completely new zine: It’s Not You. I Just Need Space (interplanetary letters of love and rejection). That zine is more design-meets-comedy – not political or feminist – just full-on geekery.

AiM started out mocking advertising, but my feminist perspective came through the sarcasm fairly quickly. I was surprised to be interviewed for a book on menstrual activism though. I tend to get so caught up in the enjoyment of the comedy and the design that I forget how powerful zines can be.

So where can people get the zines?

They’ll be available starting from this Tuesday night’s launch of DIY Summer at Site Gallery in Sheffield. I’ll update further UK/Europe stockists on my blog.

This Thursday, though, New York types can head to my zine reading at Bluestockings on Manhattan’s Lower East Side. The show’s called “Zine Girl, You’ll Be a Woman Soon”, and it looks at growing up writing zines. I’m 35 – definitely not a girl anymore – I wonder what happens after the term ‘zine girl’ doesn’t apply. I’ll be reading extracts from the comedy zines I’ve written over the years, including my 4th grade report on Benjamin Franklin. It was hand-written on sugar paper and bound with brads. That totally counts as a zine, right?

I love reading at Bluestockings because my grandma (whom I interviewed in issue 2) grew up nearby. She was a big influence on my comedy and on my outlook in general. She died a few years ago, and I talk about it a little bit in the intro to issue 3. It’s been an opportunity to reflect, actually, going through the old issues. I’ve kept a pretty good record of our tours and put in lots of quirky details that I’d have forgotten about otherwise. Also, there are questions I ask in issue 2 about leakage horror that I end up answering in issue 5 and in the live show with the StainsTM campaign.

Feminine hygiene adverts are the loudest voice in the public discourse about periods. That’s not right, so I started the zine to talk back to the adverts using comedy. A lot has changed since I started, though. Now, the major femcare companies are using subversive humour themselves. Ads are starting to look more like comedy sketches. They’re still trying to sell stuff, of course, and still usually rely on messages of shame and fear to do it, so I’ll keep putting out Adventures in Menstruating in response. Menstruators and nonmenstruators of all genders are always welcome to contribute a funny, period-positive piece of writing or artwork to the zine. Issue 7 is about halfway planned and will be out at Christmas.

You can keep up to date with Chella’s news on twitter.

[The image is the front cover of Adventures in Menstruating zine. It features a pale woman with dark hair, vintage style burlesque artist Kitten Von Mew, wrapped in a parachute. The background is shocking pink except for a pale pink stripe at the top of the page. Text at the top reads “Adventures in Menstruating April 2011 #6” and at the bottom, “Nothing to worry about.” The photo was taken by Kate Donovan and the cover design is by Chella Quint]