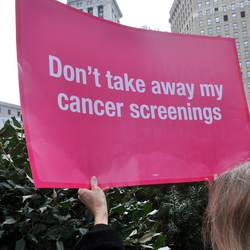 Philippa writes the second half of a 2-part post, begun yesterday, about women’s experiences of smear tests, and how they could be improved.

In yesterday’s post, I talked about many women’s experiences of smear tests, and what can go wrong as well as what can go right.

So what needs to happen for all smear test experiences to be positive ones? Firstly, there are steps we can take that can help to ensure a more positive test. Some women have taken an unusual approach and had a much more successful experience as a result. @MsEmmaB “once engaged in an in-depth discussion re my ‘hood piercing, whilst she was ‘down there’ looking at it.made me giggle.”, while @elmyra‘s “friend handed out business cards for her pole dancing school during hers.”.

Others’ advice centred around similar themes: @Sevenhelz advises, “take a friend? try to be somewhere the staff make you feel safe and comfortable, even the receptionists”, and @SirenOfBrixton offers “Advice to women who are nervous: imagine it’s your ear they’re looking in. It’s your body, try NEVER to be embarrassed by it. Easier said than done, I know, but sometimes you can fake it til you make it. Love your bits!”

While some people’s smear experiences were inappropriate and awkward, others were downright unprofessional, and thanks to information supplied by @other_red, I can tell you that if you want to raise concerns about how a smear was carried out, you can contact the PALS team – there’s one in every PCT. You can find your PALS team on the NHS Choices website. The Scottish equivalent for making a complaint is Health Rights Information Scotland, and Bwrrd Cymru provides information for people in Wales.

Other good advice is to seek out someone experienced to carry out your smear test. When I was younger this meant the University Health Service nurses, as they did an awful lot of them, but these days that might be less true, as under-25s are not called for smear tests any more. Doctors and nurses at GU Clinics and Sexual Health Clinics are very specialist in internal examinations, and could be a good choice, although not all offer smear tests, so check before you go. See which nurse your friends recommend, or who made you feel comfortable when she was giving you an innoculation. Feeling relaxed with someone makes a big difference to how your experience will be.

I started having smear tests when I became sexually active, which was the advice at the time, and I’ve had some really bad experiences. I put off my last one until it was 6 years overdue, then finally had the test a few months ago. I chose who I saw carefully, a doctor I felt comfortable with, and who does a lot of them, and am pleased to report that it was uneventful, not painful, and it left me wondering what I’d been worried about. But I know very well what I’d been worrying about, and we need to work for smear tests that are made as easy as possible for us by the professionals who carry them out.

Trans men are advised that smear tests are still essential as long as they have a cervix. FTM Guide suggest going to a GP rather than a “women’s clinic”, and West London Centre for Sexual Health have started a sexual health clinic for the Trans community, including offering smear tests.

According to the RCN Good Practice Guidelines,

It then summarises that good practice should encompass the following:

(These are selected from the full document for relevance, as are the notes above).

There is no mention of caring for trans men, and virtually nothing about the thing that so many of us have found difficult about them, which is the professional making insensitive and inappropriate comments.

While details of how to reassure and inform patients about specific issues, such as STIs, the limits of smear tests, and having a chaperone, are included in the guidance, there is no mention of reassurance for sexual assault and rape survivors, and the particular issues that can bring.

The guidance that exists is good, but a long way from complete, in my opinion. It is also clear that having good practice guidance, and having all staff follow good practice guidance, are two different things. But as we have access to the guidance (pdf), it could be useful in making any necessary complaints – we can refer to it as evidence of why what happened to us was wrong. However if you are a trans man, or if the guidance does not otherwise cover your situation, it will be less useful.

The image is a photograph of a pink placard, which reads, “Don’t take away my cancer screenings”. Tall buildings are visible behind the placard, and a person’s hand and hair in front of it. It was taken by Pretty Kate Machine and is used under a Creative Commons Licence.

Special thanks goes to all who contributed to the initial discussion, and to @CynicalRhubarb for some fact-checking help.