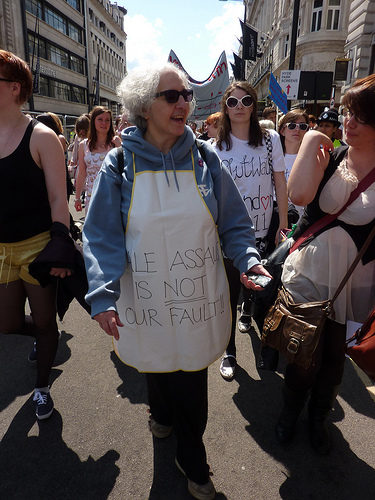 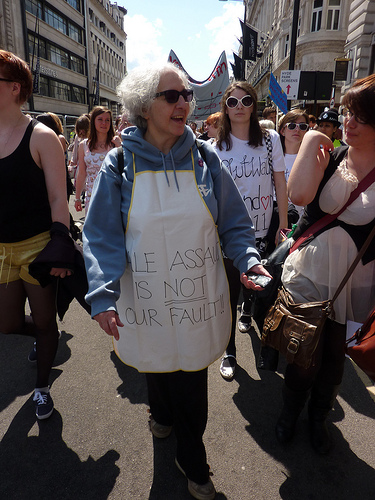 As I’ve got older, my social conscience has developed, particularly in the direction of supporting equality. I’ve climbed the career ladder and reached my goals, found that I have a voice now, and know the path to make it heard. When I was twenty, I would have been out there on the Slutwalks, taking every opportunity to influence. I’ve attended many peaceful protests and contributed to the essential collective voice needed to solidify ideas into action.

Now, at fifty, the mind is strong but the body is not so willing. The main considerations when I feel like taking to the streets in peaceful protest are ‘will there be a toilet nearby?’ and ‘exactly how far is this march?’ Arrangements to get home are paramount, as I can no longer sleep on the floor in a tent. I was almost ecstatic when I saw the ‘Bog in a Bag’ portable toilet on Dragon’s Den, but no one has yet invented something to alleviate my swollen feet and slipped disc pain for an outside protest walk and sleep-in.

Yet I still care passionately about many causes, so what can I do? Rather than conforming to the media image of older women as dizzy menopausal wrecks on a desperate man hunt, who hardly know their own minds – just check out the ‘older woman’ cast character constructions in soap operas at the moment for evidence of this – I still want to pass my experience on and get my voice heard. My usefulness and intelligence did not disappear with my fertility, and I’m keen to stay involved with peaceful protest.

Here are a few suggestions here that help to directly contribute to supporting equality and diversity without major travelling:

Despite the media focus on younger women taking part in Slutwalks, many older women have been outraged by comments made by those attempting to blame rape victims for the rapist’s actions. Recent reports of yet another woman dying at the hands of her ex partner have shocked people to the core. News is emerging of further Slutwalks planned for 2012 – if you can’t be there – no matter what age you are – break the silence and peacefully protest by raising awareness.

Image by Catherine Redfern, shared under a creative commons license. It is one of a series of shots taken at the London 2011 Slutwalk. It shows an older woman on the march who is smiling wearing an apron with the slogan “Male assault is not our fault”.