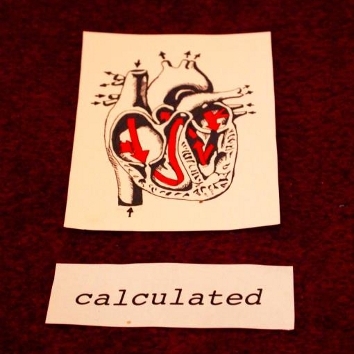 From riots to riot grrrl: Heavens to Betsy revisited

Young people’s political awakening has swarmed up as a major issue of public debate once again. First there was the return of mass a student protest movement, as young people mobilised against the budget cuts. And then the riots this summer in English cities prompted a mass debate about youth as depoliticised and disenfranchised.

Among all this discussion music has come up repeatedly; whether that’s NME lamenting the lack of a soundtrack to the student protests or political pundits blaming rap music for the riots.

So it seems an apt time for artists to consider that shattering moment in a young person’s life of political awakening. But to do so, artist Katie Hare in a multimedia installation in The Old Police Station in London, will return to a key moment in young women’s activist history, 1993, to consider Heavens to Betsy’s album Calculated, which takes as its subject Corin Tucker’s own ‘click’ moment of politicisation.

The installation, which runs from 14-16 October, and includes video, audio and zines inspired by this important album from the history of riot grrrl, is part of The Rupture Series. This series of exhibition and events seek to explore “the processes by which art may appear to ‘rupture the ownership of space'”.

The social context in which it is being staged is an aspect the organisers have considered:

“The opening and the development of this series over the course of 2011 comes as frustration felt amongst many young people about the seemingly insignificant power of the individual reaches boiling point.

Responding to a media blitz casting young adults as the ‘lost generation’, The Rupture Series looks at artists who are trying to engage and disturb the ideological complicities and unconscious practices of the individual.

The importance of this is still vital; these disruptions may simply be a rupturing of the ‘behind closed doors’ discussion or of dinner party etiquette, but such systems of personal belief are inherent to the way the world is governed.”

The series opened on 29 July with ‘Hunter/Gatherer: Last position received’; an intercepted transmission of a fictional sea crew on a search for enlightenment, whose journey goes astray. It continues on 14 October with ‘Calculated’, a sound and video installation by Katie Hare, who graduated from Saint Martins College of Art in 2010, which is based around Heavens to Betsy’s 1993 album Calculated.

A duo comprised of Corin Tucker and Tracy Sawyer, Heavens to Betsy formed in Olympia, Washington in 1991. Closely connected with riot grrrl, the band recorded a number of singles and tracks for compilations, but Calculated was their only album. Tucker went on to form Sleater-Kinney following the demise of Heavens to Betsy, and is now embarked on a solo career (her debut solo album was released last year) but her first band still excites passionate interest.

Hare intends ‘Calculated’ to be a multimedia event: “[It’s] going to be held in one of the cell spaces at The Old Police Station, in which Calculated will be playing, on a loop, over the three days. There will also be a monitor in the space showing some archive footage of the band as a visual counterpoint and a specially produced zine will be available,for free, for all visitors to take, which will contain the lyrics to the album with writings and some artwork by myself and other contributors, relating to the project in various different ways.”

She came up with the idea of a piece based on ‘Calculated’, “because, to me, it seems to really capture the moment an individual, in this case a young woman’s, belief system is shaken and they begin to start questioning the world around them. Cicely [Farrer] and Alexandra Symons-Sutcliffe, the other organisers, had never heard the album and weren’t riot grrrl buffs but were into the idea and the event grew from there.”

“It seems to be capturing a really pivotal moment in her life, when she starts to question everything and become politicised, which is something we all go through to a certain degree”

For Hare, the appeal of Calculated was its “honesty and directness. The liner notes, written by Corin Tucker, explain the reason she wrote the song ‘White Girl’, and how racism within the punk community and within ‘ourselves’ needs to be addressed and it’s referred to on a couple of the other tracks.

“In this sense, its directness is almost shocking. I remember being [made] kind of uncomfortable by its honesty when I first listened to the record. It seems to be capturing a really pivotal moment in her life, when she starts to question everything and become politicised, which is something we all go through to a certain degree. It makes me feel a tug of recognition, to remember the point in your life when you begin to grow up, everything comes into focus and is incredibly exciting and that moment, the coming of age, really fascinates me. Most people feel a real nostalgia for it, even when they’re still kind of living in it, so I thought that in a way anyone who listens to the album might feel nostalgic for that time in their own life.”

When asked if she planned the exhibition to coincide with the 20th anniversary of riot grrrl, Hare says: “No, that was a total co-incidence and one I hadn’t really even thought about till now – I’m not great with dates! But I think it definitely works in our favor so maybe I should pretend it was intentional!”

She “found out about Riot Grrrl through Kurt Cobain. I was totally obsessed with Nirvana in my early teens and would try and listen to any bands that they name checked in interviews or on their t-shirts, which is something I really love about Nirvana – they really turned a lot of people on to loads of really cool music. So I probably discovered Riot Grrrl in a totally sensationalised way at first, as a biography of Kurt Cobain (Heavier than Heaven) came out when I was 13 and I remember an extract appeared in a magazine focusing on his relationship with Tobi Vail.

“In a way I quite want to make people feel embarrassed or uncomfortable by the album and zine, as it’s so personal and unselfconscious”

“I remember feeling even then that it seemed really unfair and dismissive, and it definitely made me want to find out more – and kind of turned me on to feminism I guess.”

I asked Hare if she often worked with music. “In terms of my visual art practice, no, but I often reference pop culture and coming of age. A lot of my previous work was exploring the coming of age of young women and becoming independent in relation to slasher movies, but is almost always silent. However it seems like a really natural progression to work with music, as it’s the most potent way of recalling a moment and the most direct way of influencing the viewer’s emotions. Though with pop music there is the whole business of copyright and permission, which can be a bit intimidating.”

As to why people should attend the event, Hare says: “I’d like people to attend as it will be a unique chance to really connect with quite a challenging piece of music! I’m not expecting people to have some religious experience or anything but I would like to think that listening to the album and reading the lyrics and the zine, that people might think about a time when their life really came into focus or everything changed. Or, if they hadn’t previously been aware of riot grrrl, that it would encourage them to find out more as it’s such a fascinating youth movement that’s still inspiring people today.”

She adds, “I’m hoping we can get quite a diverse audience for this event, and I’d be really interested to see how different people react. I’m excited about this project as I think it kind of jars and this is going to sound like such a terrible cliché, with the vibe of the art world, in that it’s very earnest and kind of uncool.

“Earnestness isn’t very fashionable. I think there’s been a bit of backlash, especially amongst my generation, speaking as someone who went to art school in London, against very personal work, or really spilling your guts and everything seems to have become more detached. In a way I quite want to make people feel embarrassed or uncomfortable by the album and zine, as it’s so personal and unselfconscious.

“I did at first and then had a big think about why. It was really refreshing to come through that and revert back to being very unselfconscious and just wanting to express yourself and make yourself heard. I just want to turn everyone into angry teenagers, basically!” 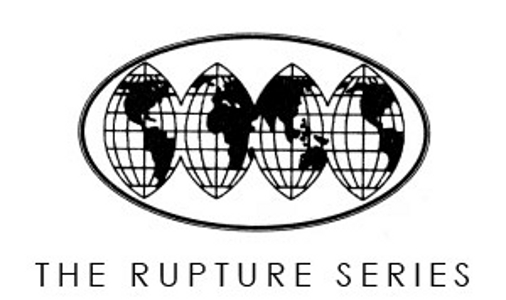 Main picture shows cover of Heavens to Betsy’s Calculated cut out and placed on a Maroon background with a strip featuring the word ‘Calculated’ placed underneath. The Rupture Series logo shows a black and white world map in a flattened out sphere as four elliptical shapes within an elliptical frame. (Both images are part of The Rupture Series publicity.)

Cazz Blase is currently wondering if Doc Martens are acceptable footwear for a job interview, even if polished. If not, she is wondering how to keep her feet dry and still look presentable