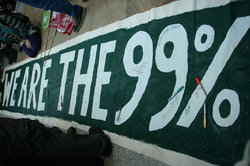 This post was written in collaboration by Helen G, Jess McCabe, Philippa Willitts and zohra moosa.

We are the 99%; it’s the slogan of a protest movement that has swept from Wall Street, across the US and now to the London Stock Exchange. But what does it mean, “we are the 99%”? It’s a slogan of solidarity, an alignment of the mass of the population in opposition to the influence of a tiny minority.

But, as many have said, it ain’t that simple.

Yesterday’s Occupy LSX protest, according to the organisers, was intended to “highlight and address social and economic injustice in the UK and beyond, as part of a global movement for real democracy“. The protest apparently passed off peacefully, although the now predictable heavy-handed response of the authorities was on display.

But why, many feminists are asking, was Julian Assange of Wikileaks asked to speak? Assange currently may be facing more than one charge of rape.

Let us remind ourselves of how Assange’s own lawyers described the incidents over which Assange may be tried in Sweden.

Asking women to put up with sexism for the ‘greater good’ is a time-honoured part of the leftist movement. It’s been written about plenty in terms of the anti-racist movement, for example, and the suffrage movement in the UK actually grew out of women’s frustration with sexism in the abolitionist movement. The unwillingness of unions to support dinner ladies in their gender pay gap claims is another example.

When will we start to understand that any movement which asks women to put up with sexism as a sacrifice for the group, as if sexism isn’t part of the problem, is doomed to fail? It’s no accident – or secret – that women make up the majority of the world’s poor and that women are being hardest hit by the financial crisis.

Throughout the action, reports came through on twitter, and live video streams were available to watch online. Television news even covered the demo, from the time to time. The world saw a crowd of people who were clearly very strongly motivated by the injustices apparent in the world. However, much of this crowd then went on to celebrate Assange’s appearance. There were also boos from the crowd, but his appearance as a speaker changed the tone. People who had been following the event with interest and passion felt it become something that was not at all related to us. Were we no longer part of the 99%? A 49%, perhaps.

Lots of people on twitter relayed their discomfort, expressing feelings that they were no longer represented, as women, and as rape survivors. Women’s rights are central to the #occupy movements around the world. And women involved in the movement deserve better treatment than to have their injustices treated as marginal, unimportant, and unworthy of direct challenge.

We’re trying hard not to be like this. But some of us are asking, if we are not represented in the 99%, and are not part of the 1%, then where are we, and why are we, in this movement?

[The image is A photograph of the words We are the 99% painted in green and white on fabric on the floor. Around it are the feet and legs of various unidentified people. It was taken by Wasi Daniju and is used under a Creative Commons Licence]