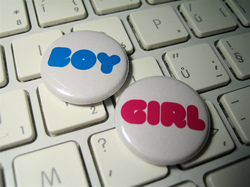 This is a guest post by Dr Laura Nelson. Laura is a writer, blogger and senior manager in a healthcare charity. She has a doctorate in neuroscience, writes the Delilah blog and led the Hamleys campaign.

My Christmas present came early. Hamleys ditched its gender signs. The story blew up last week and has been covered by most of the national newspapers, radio and TV, and numerous other news outlets in the UK and across the world.

It’s a change with significance. Hamleys is one of the world’s largest and most influential toyshops, and the run-up to Christmas is the busiest time of the year.

In October, I went into Hamleys and saw their gender segregation of toys. It was at this point that the campaign for me took off. I blogged it, I gathered support on Twitter and elsewhere – journalists, scientists, politicians and organisations such as Mumsnet. The support was huge. I devised a strategy.

In the past few years there have been successful campaigns against toyshops in Sweden (a group of schoolchildren) and the UK (the organisation Pinkstinks). A few months ago, WHSmiths in London scrapped its ‘women’s fiction’ sign. For Hamleys, I anticipated a prolonged campaign. People sent me ideas. A petition? A ‘sit-in’ protest? A legal battle? I was planning a hard fight.

Writing the letter was meant to be only the first step. I wrote to the CEO of Hamleys and spoke to their marketing team, outlining my concern that gender segregation restricted children’s and parents’ choices and influenced the development of skills and aspirations of children, contributing to society’s inequality.

In my letter, I requested they categorise toys by type, not by gender, and pointed out that on the girls’ floor the toys were related to domestic, caring and beauty activities and the boys’ floor was geared to action and war, with little scope for creativity.

At the same time as speaking to Hamleys, I contacted the nationalised Icelandic bank, Landsbanki, which controls Hamleys. The CEO, Gudjon Reynisson, is Icelandic, and Iceland is a model feminist country.

A few days after I sent the letter, Hamleys changed the signs. Someone sent me a tweet with a link to a photo of the new sign. It appeared that all mention of gender had been removed and the toys were now categorised by type.

I went straight to the shop and snapped a photo. I called their marketing team. They said they had been planning to change the signs anyway. A remarkable coincidence if this were true, I thought, and odd they hadn’t told me this when I first called them.

It didn’t matter what Hamleys said. It was a story. The Financial Times got it first, and then the Times. The Guardian soon followed. On the morning of Tuesday 13 December, it was mentioned on the Today programme. I had been up until 3am the night before, sending out emails and tweets with the news and I woke up to my phone dancing and beeping on my bedside table. I popped out to buy copies of the newspapers, came back and had three radio stations wanting to talk to me.

The rest of the day was a blur of media. The Telegraph called, then the Evening Standard. I was interviewed by Vanessa Feltz on BBC London radio and Irish radio. I barely had time to eat before I was whisked away to White City studios to debate gender stereotyping with another neuroscientist who believes boys and girls are born with cognitive differences.

Meanwhile, people kept sending me links of articles that were appearing. The news was spreading to Germany, Italy, Portugal, Holland, Slovenia, US, Hong Kong, Canada, Australia. Mumsnet members were discussing it. Natasha Walter wrote a piece for Virago books. Children responded to the news on the Newsround site, and the tabloids had it by the evening. The Telegraph published three opinion pieces on it, one of which opened with: “Who would be Laura Nelson today, eh?“.

I began to become more aware of negative comments, as they built up on the Telegraph and Mail. I didn’t read many of them. On BBC radio West Midlands, the presenter was more confrontational than others had been. In the evening, I went on CNN TV, and a few seconds before we went on air, the presenter said to me: “I don’t see the point of your campaign. Maybe you can tell me.”

Part 2 of Laura’s experience of the campaign and the media scrutiny will be posted here tomorrow.

[The image is a photograph of a computer keyboard, with two button badges on it. One badge says “boy” in blue, the other says “girl” in pink. It was taken by ntr23 and is used under a Creative Commons Licence]