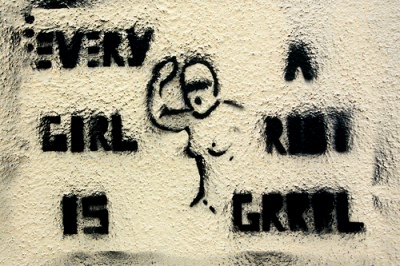 My first post for this guestblog was on women in punk bands who’d influenced me when I was growing up. At the end, I lamented that when I was a teenager there were very few punk bands that were either comprised of or fronted by women for me to get into. However, that’s not to say they didn’t exist, or don’t now – I just wasn’t aware of them. With that in mind, I thought I’d write a post about great bands I’m currently listening to that are still playing gigs and recording new music. Links on band names will lead to music.

First up absolutely has to be Husbands N Knives – a four piece old school riot grrrl band from Torquay. Reminiscent of and equally as brilliant as vanguards such as Bikini Kill and L7, with song titles such as “Nazi Bull Dyke”, they’re an absolute must-listen. You can follow them on Facebook and Twitter for updates and gig announcements.

Slightly more established, but completely different, are Dirty Revolution, a Cardiff-based female fronted punk/ska band. These guys remind me of Sonic Boom Six when they were good. (I did tell SB6 to go back in time and split up after their first album but it turns out it’s not nice when strangers offer you unsolicited advice like that. I digress.) Anyway, DR are pretty damn cool. They don’t always tackle explicitly “feminist” issues (though there’s a nice song called 50p which has a cool body-positive message), they mix it up with tackling issues such as racism in the scene, which always gets the thumbs up. Again, they can be found on Facebook for updates/gigs.

Third are a band I accidentally discovered when they were booked for a gig I was helping put on at the Bristol Reclaim The Night march after-party last year. They’re called Drunken Butterfly and are a young three-piece who veer between hard riot grrrl and soft, melodic folk-punk. Definitely a band to watch out for. Find them on Facebook.

Pettybone are another four-piece riot grrrl band (I really like four-piece riot grrrl bands, if you couldn’t tell by now), this time hailing from London. As well as the riot grrrl, they also show strong crust and hardcore influences. I saw them at the Green Door Store in Brighton a week or so ago. The amount of energy produced by them is amazing, and the sheer noise that Amy (vocals) can produce is seriously impressive. They can be followed for gigs and updates on Blogger.

Last up, I’m going to break the rules (shut up, it’s my guest blog spot) and include an all-male band called ONSIND. They’re a three piece acoustic punk band from Durham, and there’s a very good reason for their inclusion. With an album titled “Dworkin’s Bastards”, and songs including “If You Feel Attacked By Feminism, It’s Probably A Counter-Attack”, “Heterosexuality Is A Construct” and “That Takes Ovaries”, they’re probably the best feminist ally-band I’ve ever heard. They can be found on Facebook too.

As ever, I’d love to see your recommendations in the comments – they don’t have to be punk or riot grrrl, just great local/small bands. Hell, are you in a band? Do a bit of shameless self-promotion!

Image by gaelx, shared under a Creative Commons Licence.