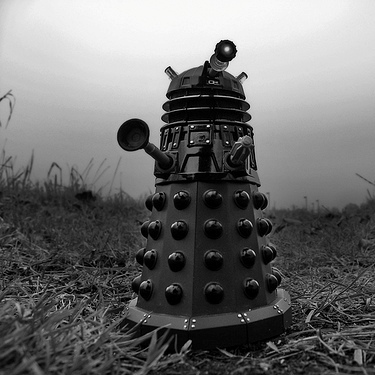 Where do you draw the line?

I’ve spent a lot of time recently considering the various problems with things I like. I don’t know if it’s just me being a “humourless feminazi” (it’s not), but I find it incredibly difficult to continue liking something after I’ve noticed a big glaring political problem with it. My question is though, where can a line be drawn? When do you say that something has gone too far and wash your hands of it straight away?

After the crushing, heartrending disappointment of the Doctor Who Christmas special, where the female characters were only “strong” because of their reproductive capacities (not because they could commandeer freaking walking robo-spaceships) and the generally crappy way women have been portrayed by Steven Moffat in the show in other episodes, am I going to stop watching Doctor Who? Well, no. I think this post on how to like problematic things is a good guide to how I feel about it (accept that some of the things you like are crappy, criticise the crappy bits and don’t try to defend them to other people because you like the rest of the show) – but sometimes that just can’t cut it.

So where can one draw the line? I think a lot of it has to do with the expectations you have of a group or person. It’s far more disappointing when a group you would hope to be inclusive or “right on” turns out to be just like the rest of the world. When the Occupy movement started, I voiced my concerns that they were reflecting the same tired old privileges, and although I tried to get involved, my original sympathy to the movement quickly disappeared. The same criticisms have been made of the atheist/skeptics movement, the anarchist movement and feminism itself. As a great believer in intersectionality, I refuse to be involved politically with a group who want to fight for their rights while continuing to oppress other people. If anything, it just doesn’t make sense.

But with political movements, there are always small sub-communities where the members do accept the problems with the wider community whilst still self-identifying with it (i.e. anarcha-feminism – the topic of a future post). So where does one say “enough is enough” when discussing popular culture, since that isn’t possible?

My rule of thumb for this is usually “when the person has been made aware of the problems with their comments/stances and refuses to either apologise or even consider that they may need to”. For instance, I loved Amanda Palmer. Loved her pro-choice, pro-natural appearance, pro-feminist music. But then some feminists questioned her stance on disability rights (because of her Evelyn Evelyn project), and instead of admitting the problematic nature of her fetishising conjoined twins for a laugh, she instead went on Australian TV and had a pop at “handicapped feminists”. I haven’t been able to bring myself to listen to her since I found that out, because it’s just so disappointing.

Another good example is Caitlin Moran. I’ll admit now to never being a huge fan of her, but that’s probably because the first time I became fully aware of her was when she was being (rightly) criticised for unapologetically using the word “retard” in her book How To Be A Woman. However, a couple of months later on Twitter she used the word “tranny”. I (and many others) tweeted at her to point out that it’s a really offensive word, which is considered a term of abuse. Instead of acknowledging this or apologising, she simply blocked anyone criticising her. Since then I’ve had absolutely no time for her or anything she does.

But I still like Doctor Who. This could just be because Moffat’s problems usually stem from benevolent sexism rather than actual “malice” towards women, and I don’t expect much from what I should always remember is a children’s TV show, or it could just be because I’m a massive hypocrite who wants to have her lefty-activist-vegan-carbon-neutral-fairtrade-dalek-shaped cake and eat it.

Sorry for the somewhat rambling nature of this post, but it is a topic that consistently plays on my mind, and it’s difficult to explain and try to rationalise my gut reactions. As ever, I’d love to hear people’s thoughts on this. Do you still watch/listen to/participate in things you consider to be problematic? Why? Where is your line drawn? What else should I be boycotting?!

Photo by Johnson Cameraface, shared under a Creative Commons licence.