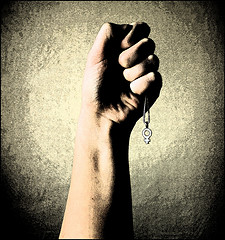 Why I’m an anarcha-feminist

Disclaimer: This article will discuss my personal feelings about anti-capitalism, anarcho-communism and their relationships with feminism (and other systems of oppression). Because of this, I will not be discussing the histories of the movements. If you wish to learn about these, the origins section on the wiki-page for anarcha-feminism will point you in the right direction.

When I was about seven years old, I asked my mother why everyone couldn’t just do what they were good at and share everything equally. This was my first foray into anti-capitalism, and my opinions haven’t changed much in the past fifteen years.

It has always been very important to me to strive for social equality, and capitalism simply does not provide that. I could wax lyrical all day about the oppressive and unjust nature of the capitalist society, in which we are told that the only value of a human being lies in their ability to make profits for a CEO, but this is a feminist website, and I have a 700-word limit. So I will merely outline why I believe that capitalism is inherently anti-feminist and that the solution to smashing patriarchy will necessarily involve smashing capitalism.

It is in capitalism’s best interests to oppress women. The main reason for this is that by devaluing and denigrating 51% of the population as useless and inferior, it seems legitimate to pay them less, or to not pay them at all, for their work – no matter how good it may be for society. Childcare and housework are two prime examples of this. They are services essential to humankind, yet we expect women to a) be the sole or primary providers of these services and b) perform them for free as well as generating capital by holding down other jobs. This is what is known as the “double burden” on women. In a truly equal society, not only would these roles be seen as suitable for everyone, they would be seen as equally important to other work. As it stands, “Women work two-thirds of the world’s working hours, produce half of the world’s food, but earn only 10% of the world’s income and own less than one percent of the world’s property” (Global Poverty Project).

Another way in which capitalism exploits women is by creating problems for them to worry about, then offering to sell them a solution. This usually takes the form of making women feel disgusted about their own natural bodies, and convincing them they must change – see pantyliners, douches and pretty much the entire make-up industry. If we smashed capitalism, we’d smash the need for people to sell us things by making us ashamed of who we are.

There are many more examples of this, but once again, I am writing a blog post, not a doctorate. So – why do I believe that once we have smashed capitalism, anarchism is the solution?

Honestly, it’s mainly because I don’t believe in anything else. Any hierarchical system of government or community, be it feudalism, the current parliamentary system or party-led communism will necessarily contain inequality. The needs of the few who make the decisions will outweigh the needs of the many who have decisions made for them. We can see this with the current coalition, whose members have both simultaneously claimed £35,000 on a “second home” when their first home is literally down the street and demonised people with severe disabilities wanting to live normal lives as “scroungers”. Four legs good, two legs better indeed.

However, people in the anarchist movement have been brought up in the same prejudiced, patriarchal societies as the most rabid capitalist, and that has to be overcome. Whether it’s women’s needs not being taken care of in an anarchist environment, or silencing women in group discussions, manarchism seems to constantly rear its ugly head, and we need a feminist movement-within-the-movement to counter it, and that movement-within-the-movement is anarcha-feminism.

So, that’s a very short version of why I am an anarcha-feminist. I’m not claiming to be 100% right, or to speak for all anarcha-feminists(!), but this is what I believe we need to do to create a fair, just and equal society for all.

For more on anti-capitalist feminism in the current UK climate, this article is a very worthwhile read.