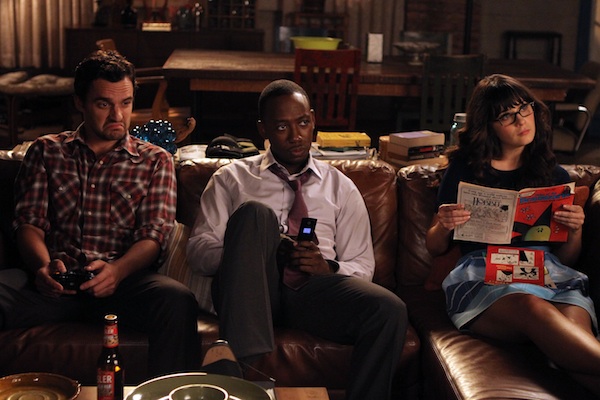 The manic pixie dreamgirl grows up

Emily Kenway, explains why the show tickled her feminist fancies

New Girl is pretty simplistic as these things go, with clearly sign-posted slapstick and the obligatory heart-warming moments too. But is it feminist? That’s a far more intriguing question.

The show is riven with clichés, from the best friend who is, of course, a professional model to the sleazy, sex-obsessed Schmidt. Not to mention the biggest one of all: Jess herself. The ‘funny girl’ is as much a stereotype as the ‘hot girl’, and Jess definitely falls into that There’s Something about Mary category.

Deschanel is known for playing the kooky girls – the Manic Pixie Dream Girl – so is Jess just another one of these? I don’t think so. Most obviously, Jess is the star not the support act, and lest we forget, she does actually have a stable career as a teacher. She isn’t frivolous or seductive, and she isn’t a foil for the men’s exploits, rather it’s the other way around.

I think there’s more here in favour of feminism than first meets the eye.

This feminist consciousness runs through the show, albeit shackled to the tastes of a stereotype-saturated culture 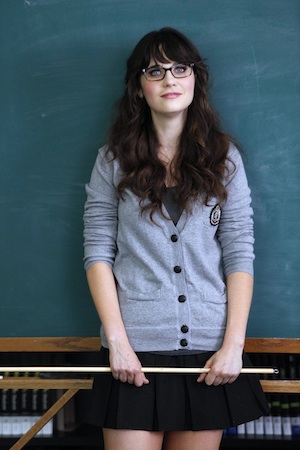 The first episode establishes Jess in her new situation and her supposed eccentricities, showing the various ways in which the three guys and her friend Cece try to cheer her up. They do this by attempting to ‘fix’ her – to get her to “hide her crazy”, to shave her legs (“front and back”), and to dress her up appropriately for a date.

For me, one of the pivotal moments of the show was when Jess stepped out of the shower.

It actually made me sit up and give the show a little more kudos. I was expecting a She’s All That style reveal: the quirky clutz-girl would be naked, divested of dungarees and glasses; with all barriers of geekhood removed, she’d be conventionally beautiful.

But that wasn’t what happened.

Confounding the expectations of raunch culture, Jess stepped out wearing the somewhat bizarre ensemble of a generous pink swimming costume and what appeared to be pyjama bottoms.

This feminist consciousness runs through the show, albeit shackled to the tastes of a stereotype-saturated culture. It’s Schmidt, the ‘douche bag’, wannabe-Casanova who strips for the opposite sex at any given opportunity. And in return he is subjected to the female gaze of Cece, who deadpans “Please don’t make me laugh at you.” We see Nick (and not Jess) drunk-calling his ex and then blurting out vulnerable questions to her.

Big-bucks television may not be fully clued up on gender equality, but at least there is self-awareness. Whilst Deschenal lacks the realism of Kristin Wiig in Bridesmaids, there the female lead’s behaviour there had to be explained away by underlying issues; here, as the tagline says, “Jess will be Jess”: no excuses necessary.

In the closing moments of the show, when Schmidt looks across at Jess and says “I would still totally do you”, Jess thanks him sweetly. Then directs him put some cash in the Douche Jar.

That’s this programme in a nutshell for me. The stereotypes are all there, brash and loud but so is the antidote.

The promotional material for Channel 4’s new import hit New Girl implies that this is a show about a sassy, modern gal – a Mary Tyler Moore for our times – who happens to move in with three single men after her relationship goes kaput. But from the very first episode, it’s clear that this isn’t exactly the case. In fact, it is a show about three borderline dysfunctional men whose relatively calm, well-ordered lives are thrown into tumult by the arrival of a woman in their midst. 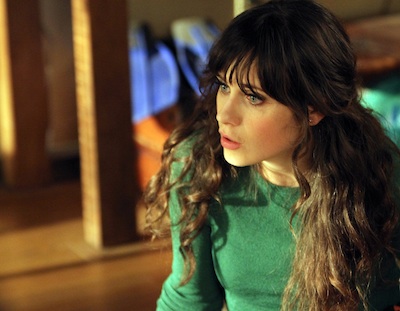 The lead role is taken by the unthreatening kook du jour, Zooey Deschanel – a woman so twee, she once married an elf.

Though supposedly endearing, Jess is bumbling and incompetent, and lurches from boyfriend to male roommates in search of protection.

Jess’s pathological avoidance of conflict is clearly supposed to show that she is a sweet and vulnerable character – instead, she comes off as a bit of a drip.

She cries while watching Dirty Dancing. She is clingy and fails to have meaningless sex because nice girls don’t. (It is noteworthy that in a later episode, the one girl who enjoys of no-strings-attached sex is portrayed as unstable and predatory.)

The three male leads are largely interchangeable, although Nick’s harassment of his ex-girlfriend (including prank phone calls late at night) are presented as charming and evidence of his sensitive side.

Much of the show’s humour comes from the supposedly hilarious behaviour of Schmidt, a self-confessed ‘douchebag’ who makes Friends‘ Joey Tribbiani look enlightened and has flashbacks of his boardroom being full of grown-up mean girls who talk about tampons and jeer at him.

Whether or not this is true or merely a fantasy created by his female-phobic brain is hard to identify – this is a show that revels in offensive gender stereotypes.

Jess is so incapable of looking after herself that Schmidt has to teach her how to shave her legs. Her vulnerability and lack of confidence are exploited at every turn by her roommates, who push her towards their friends as a potential one night stand, and constantly criticise her behaviour.

Although Jess is reliant on her roommates, both for support and a roof over her head, this emotional transaction doesn’t go both ways. Like Henry Higgins before he gave Eliza her posh girl makeover, their lives were supremely independent and content before Jess burst onto the scene. They don’t need her, but she does need them.

On finishing the opening episode of New Girl, I wasn’t tempted to watch more so I could find out what other wacky hijinks Jess and her new flatmates get up to. All I wanted was to tell her to get out of there as quickly as possible before they break her self-esteem down any further.

Jess isn’t a groundbreaking character, for all she tries to be goofy and ridiculous. It takes more than spontaneous song and dance routines to create a loveable heroine. Inside New Girl, there’s a good show struggling to get out. However I suspect it, like me, will give up before too long.

All images from Channel Four.

Emily Kenway currently works in public affairs for Toynbee Hall after spending seven years as a professional opera singer. Her blog is a collection of positive ideas, products and policies that can improve society. She likes miniature things and gingerbread.

Kaite Welsh is an author, activist and freelance journalist. She refuses to accept that she has too many books.