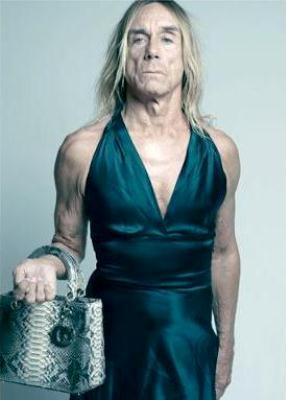 Laura argues that a mother’s decision to cut her son’s long hair reflects the sexist, homophobic and transphobic nature of our society.

“I’m not ashamed to dress ‘like a woman’ because I don’t think it’s shameful to be a woman” – Iggy Pop (full image here).

Earlier in the week, the Telegraph ran this article about a five-year-old boy, Rean Carter, who is having his long blonde hair cut for the first time after being bullied at school. Apparently the other boys wouldn’t play with him because he “looked like a girl”.

There’s so much wrong here it makes me shudder. That five-year-old boys already think that looking like a girl – and therefore being a girl – warrants bullying and exclusion, is a deeply sad reflection on our society. That simply having long hair calls a boy’s sex into question, and that his mum feels it necessary to assure us that he “is a proper little boy who likes Scooby Doo and cars and is getting into football”, shows how desperately we still cling to traditional gender stereotypes.

This gender policing is steeped in sexism, homophobia and transphobia. Sexism because little boys’ masculinity must be carefully constructed and controlled to ensure they don’t suffer the shame of being associated with women and girls. Homophobia because if little boys display traditionally female characteristics or desires it’s assumed they might end up – horror of horrors – gay. And transphobia because there’s a chance that if he wants to dress “girly” he may actually view himself as a girl, which makes him a freak in the eyes of society.

But instead of tackling sexist, homophobic and transphobic bullying in our schools, instead of teaching children that there’s no one way to be a boy or a girl, that there’s not such thing as boys’ toys or girls’ haircuts, what do we do? Force children to fit into a sexist, homophobic, transphobic system, and blame the parents. The Telegraph headline actually reads “Mother finally allows five-year-old son to have hair cut after playground bullying” (emphasis mine). Yes, the poor lad’s mother was cruelly preventing him from having his hair cut short. Let’s just ignore that fact that he was quite happy to be mistaken for a girl before the sexist bullying and gender policing started. Because of course a little boy must innately want short hair.

Rean, I think your hair is beautiful, and if you ever want to grow it back again, remember no one has the right to tell you who you are or what you are because of the way you choose to present yourself or live your life.