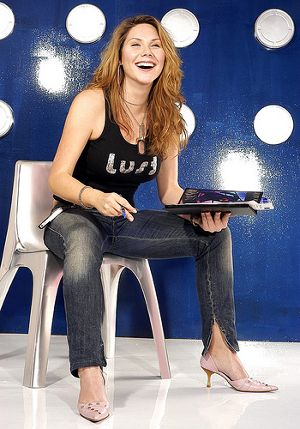 NB: Only partial nudity is shown in the clips included but they’re probably NSFW.

Her movies do have, as described, “an innovative mise-en-scène, beautiful sets, and characters we can identify with” but also a creativity, imagination and linger that we can lust for. This seems far from the Mills and Boon/Chippendale representations of female desire of days gone by.

Picture shows Erika Lust casually sitting in a chair and smiling, against a blue background. She is holding what looks like a magazine in her left hand and a pen in her right hand, wearing blue jeans and a vest top with the word “lust” in silver on it. By TV Cultura and shared under a creative commons licence.