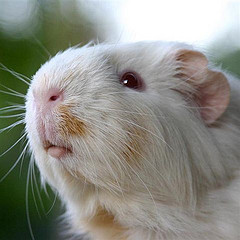 There’s lots of debate currently going on through our Twitter feed around Lush’s publicity stunt to highlight the cruelty of testing cosmetics on animals. It’s a performance piece in which the female actress artist plays the role of the animal while a man restrains, force feeds and performs horrible tests on her which essentially look like torture. In a shop window.

I first heard about the campaign this morning and started to watch the video [MASSIVE TRIGGER WARNING] of the stunt, but was so disturbed and upset that I had to stop a few moments in. I’ve actually found it hard to focus on my work this morning because of it and still feel shaky and sick.

Lush’s campaign manager has defended the stunt with this blog post, where she says:

I am very aware and very sad that campaigning groups (and all sorts of other groups, industries etc) have capitalised on titillating images of women – or worse – on images and storylines that encourage the abuse of women. It is a depressingly simple way to cause a stir whilst reinforcing certain power structures. It is a way of generating ‘attention’ that both I and Jacqui [the actress artist involved] condemn.

We did not perform a sexy version of oppression or create a teasing ‘naughty’ campaign. Instead – led by Jacqui’s desire to perform an endurance piece that would respect the actual suffering of millions of animals – we performed a version of oppression in which we are all complicit to challenge women and men to consider the dark secrets of a beauty industry that insists it exists to make us ‘feel good’.

It was a performance of violence (not violence against women) where – unsurprisingly – the oppressor was male and the abused was vulnerable and scared.

We felt it was important, strong, well and thoroughly considered that the test subject was a woman. […]It would have been disingenuous at best to have pretended that a male subject could represent such systemic abuse.

But this is clearly not the case. I think most people would agree that cruelty to animals is a bad thing; in fact, as a nation we appear to care more about the abuse of animals than the abuse of women, given that we give more to donkey sanctuaries than charities supporting female victims of violence. It’s a sad fact that plenty of the men targeted by Lush’s stunt will have committed violence against women themselves, or used sexually violent images to get off on. I somehow doubt that they care more about women being hurt than fluffy animals being carved to pieces.

So where’s the logic in using a woman for the campaign? Why not fill their shop windows with photos of tortured animals, show undercover videos from animal testing labs or perform the stunt using realistic models of animals? I can only conclude that they did indeed want to “cause a stir”.

Like PETA, Lush have capitalised on the fact that women’s bodies garner attention and, like PETA, they don’t seem to be particularly bothered about any collateral damage.

One in four women have experienced male violence, which means that a quarter of the women who walked past the shop window or clicked the link to their video and saw a woman being tortured may very well have been reminded of their abuse, with all the upset and trauma that entails. And not a trigger warning in sight. Do Lush think we need to experience trauma ourselves in order to care about the trauma experienced by animals? I know I don’t.

Furthermore, by knowingly and intentionally using the oppression and abuse of women as a springboard to raise awareness about the abuse of animals, Lush are drawing attention away from the first form of oppression and onto the second. Ignore the fact that this is a woman being tortured: imagine if she were an animal! Yeah, violence against women is bad, but look what your cosmetics consumption does to animals!

In this context, Lush’s actions are crass, insensitive and actually damage many of the people who care about the issues they are trying to raise. As one of them, I am hugely disappointed in the company, and will never be shopping there again.

NB: I didn’t watch any more of the video as I felt myself getting triggered and spacing out (thanks, Lush!), so I haven’t got the full picture and would welcome other people’s comments.

Image of a guinea pig – and animal I care about very much despite not watching the whole of Lush’s video – by WOAW, shared under a Creative Commons licence.