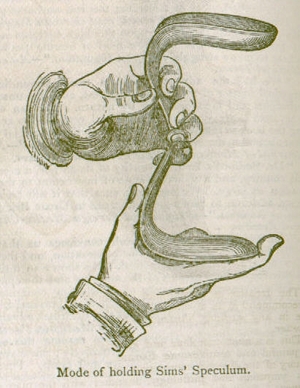 The Victorians and the speculum

About a week before my 25th birthday, I received an early gift from the NHS. No, it wasn’t a Caribbean cruise for two or even a free boob job, it was an invitation to my first cervical smear test.

While I have no intention of describing the rather awful experience, I will say that it was made considerably worse when the nurse informed me that she was about to use a speculum. I felt less like a 25-year-old married woman in 2011 and more like a prostitute in the 1870s. (Needless to say, when I conveyed this sentiment to the nurse, she appeared wholly unsympathetic to my fears…)

The vaginal speculum has a long and checkered history. An excavation of the House of the Surgeon at Pompeii suggests that the speculum has been in common use since the first century BC. The example you see to the left dates from the mid-19th century and was developed by Dr Marion Sims, the so-called father of US gynaecology.

While Dr Sims and his speculum were welcomed in the US, it was a different story among the medical profession in England. When William Acton attempted to introduce the speculum in the 1850s, he was heavily criticised by many of his peers. They viewed examination with a speculum as a degrading and humiliating act that not only caused physical and mental trauma but also a potential loss of a woman’s modesty and virtue.

It was during my early research into the regulation of prostitution in the Victorian era that I first became aware of the speculum and its dark history. A quick search on the Contagious Diseases Acts, for instance, and you’re sure to find it lurking somewhere in the background. The CD Acts were the Victorian answer to the problem of venereal disease among the military and gave plain-clothes police officers the right to arrest any woman identified as a prostitute.

The repeal campaign was no minor rebellion; it represented a nationwide and co-ordinated assault that united women of all social backgrounds in a common cause

Examination by speculum followed and, if venereal disease was found, she could be detained in a lock hospital until cured. While the first CD Act of 1864 only applied to garrison and port towns across the country, the acts of 1866 and 1869 extended these geographical boundaries.

Perhaps predictably, many other women were wrongly identified as prostitutes and examined under the CD Acts, prompting a national outcry in the late 1860s. Step forward Josephine Butler and the Ladies National Association for the Repeal of the Acts. Butler was outraged that the acts left “unpunished the sex who are the main cause, both of the vice and of its dreaded consequences” and also the classification of women into two groups – the respectable and the fallen. These ideas linked into wider view of the prostitute as “a social pest, carrying contamination and foulness to every quarter,” as William Acton said.

But Butler was not just fighting against this view of prostitutes as the agents of infection; it was forcible examination by speculum that she was most opposed to. During the repeal campaign, Butler was inundated with reports of working-class girls as young as 13 being snatched from the streets, restrained and subjected to an examination that could last for 45 minutes or longer, according to Jennifer Worth’s Farewell to the East End.

For the abolitionists, the speculum was a ‘steel penis’ and an ‘instrument of rape’ that physically and morally defiled, humiliated and harmed women – prostitute or not.

The repeal campaign was no minor rebellion; it represented a nationwide and co-ordinated assault that united women of all social backgrounds in a common cause. Their aim, to wrestle back control of their bodies and to operate in the public sphere without fear of male harassment and sexual violence, was ultimately successful and led to the repeal of the acts in 1886.

But while Mrs Butler and her ladies urged women to actively resist the speculum, there were – apparently – some Victorian ladies who were left begging for more.

By the 1880s the speculum had a serious image problem

In 1853 the physician, Robert Brudenell Carter, wrote: “I have…seen young unmarried women, of the middle class of society, reduced by constant use of the speculum to the mental and moral condition of prostitutes; seeking to give themselves the same indulgence by the practice of solitary vice; and asking every medical practitioner…to institute an examination of the sexual organs.”

But the Victorian medical establishment was quick to see the dangers in women’s sexual gratification. There was the obvious risk of hysteria consider, brought on by excessive pleasure, and not to mention “the complicated misery of a husband” when a wife can be pleasured by her doctor.

By the 1880s the speculum had a serious image problem. From the heady world of female pleasure to the enforced examinations under the CD Acts, the speculum’s entrance into the English medical profession was far from easy.

Its role in the detection of gynaecological disease would ultimately come transform the speculum from an ‘instrument of rape’ to a medical tool that usually inspires neither fear nor hostility in the modern woman, and is vital to saving lives. Except in my case, anyway.

Kaye Jones writes for History In An Hour and is currently setting up her own site, Heroines and Harlots, devoted to exploring the lives of ordinary women over the last two centuries