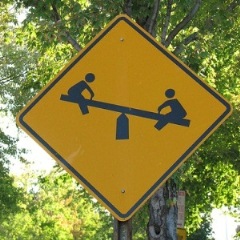 Sex work and the see-saw of morality

After her ex-partner revealed that he had slept with a sex worker while they were in a long distance relationship, Vic was forced to re-examine her feminist principles and come face-to-face with the wider debate on sex, sexuality and women’s rights: “I had to set aside any left-of-centre moral panic attacks and really examine my very own ‘personal is political’ situation”.

Repulsive. Scandalous. Shame. Degrading. All adjectives used in the media in past six weeks to discuss sex and the peripheral acts which make up the sexual landscape. While this repugnance is nothing new, these articles show that the angle is changing – the moral panic attacks are being aimed at the system, at the ‘johns’, at the leerers – including secret service agents and politicians (see Berlusconi). Seemingly, the see-saw of morality is tipping towards a vilification of the person with the purchasing power. On the face of it, a good thing, right? Criminalising the buyers is progress, isn’t it? I have recently had the chance to delve deeper into the debate from a personal perspective and have found that nothing could be so clear-cut.

While I have never explicitly identified as a sex-positive feminist, I have always agreed wholeheartedly with the core premises of sex-positive feminism: the promotion of sex workers’ rights; sex education in schools; and the free expression of sexualities. But, when my ex-partner revealed to me that he had been unfaithful to me with a sex worker, the picture became a lot fuzzier.

Because, no matter how I feel about rights, a part of me felt corrupted. Not by the fact that he had had sex with a sex worker, but by the fact that another woman had been used, purely and explicitly, to gratify the person whom I had such faith in. And it was not only me that felt a sense of degradation; he was evidently self-disgusted. The more I considered how we felt, the more I read his infidelity as a grasp at a concept of manhood in which women are at once idealised and denigrated.

In the truest sense of the phrase, the personal was political – we were two people caught in the wider net of body politics in a scenario which has been repeated time again. It had harmed us both and contributed to the end of our relationship. But what of the third person involved here? What of the (for me) faceless sex worker? What of her motives and response? What of her rights? What of her self?

In my native New Zealand, sex work has been legal since the Prostitution Reform Act, 2003, and sex workers have enshrined health and legal rights, as well as an active support network. The clear guidance provided by the Act led me to believe that the power dynamic between customer and sex worker was more equal and less questionable from the point of a feminist ethic. Moreover, I saw the logic in the argument that a woman’s sexual freedom is part of her sexual autonomy and to denigrate the sex industry is to denigrate those workers who choose their vocation out of interest, pleasure or a sense of empowerment. Not only that, to denigrate the sex industry was in some way to be on the side of those who wish to maintain prostitution’s illegality, thus endangering all sex workers.

However, my sense of degradation in the face of my ex’s revelation challenged all of these assumptions. The profound sense of loss that I felt was not just because of the damage done to my relationship. I felt as though my sexuality had been compromised. I felt as though both the sex worker and I had been used and denigrated and we had become every woman in my mind; coping with the fall-out of vastly unequal sexual power dynamics. When I looked even further, I saw that my ex was tied into the same dynamic – his choice was not a choice in the freest sense of the word. He, like the rest of us, had the patriarchy inside his head.

So, where do we draw the line on the expression of sexuality? Where do objectification and degradation end and where does the right to choose begin? Because even though the see-saw is tipping, I argue that it is wrong to see things in black and white. We must confront the idea that those buying sex workers are in many ways entrapped in the same societal expectations of sexuality as the sex workers are. Otherwise we are blinding ourselves to the nuances of sexuality and also giving powers of choice and autonomy to buyers that do not exist in reality.

One thing is clear, the sex industry and its workers need to be made more visible. A broad cross-section of workers needs to be given a voice and the industry to be governed by clear rules and regulations that have the sex workers and their well-being and security at their core. Facelessness and the denial of personhood it implies is not an option.

Image by navonod, shared under a Creative Commons licence.