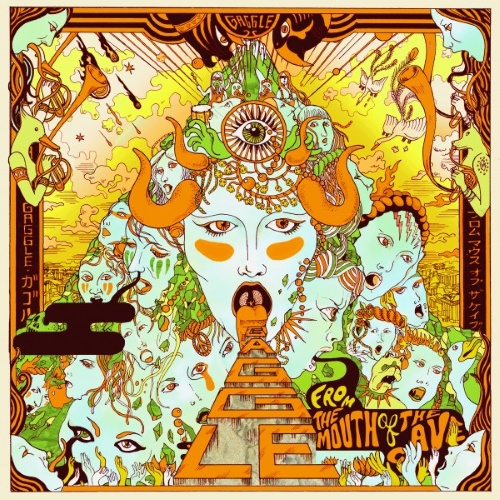 Gaggle: The wait is nearly over!

If you have yet to hear of Gaggle, then now is the time. Gaggle can be described as an alternative choir, but that term doesn’t really do the 21 all female collective justice because what they do goes above and beyond the restrictions that the term choir might conjure up.

The collective are, without doubt, an innovative and original concept and were put together by Deborah Couglin, a songwriter and composer who was also notably a former member of the band 586 (who were rather awesome too). According to Gaggle’s press release, they haven’t set out to purposely be considered a feminist idea or “an act of positive discrimination”. However, this doesn’t mean there aren’t many aspects of what Gaggle do that could be considered feminist. First of all, when they perform, they wear robes and headdresses that conceal most of their bodies, so you have no choice but to judge them on their vocal ability rather than how they look. They also took part in one of the many Meet on the Bridge events for International Women’s Day this year after performing a very successful version of the opera The Brilliant and The Dark, which documents history through the eyes of women and was originally performed by over a thousand volunteers from the Women’s Institute.

The best way to listen to From the Mouth of the Cave is to take in the whole thing with headphones on, without any other distractions

Every musical encounter I have had with Gaggle has been different. First of all, I heard the single ‘I Hear Flies’ (which interestingly isn’t on the debut) after looking up the group on the internet when I saw a few friends mention their name excitedly a few times. The song immediately had me intrigued. On the strength of hearing it, not only did I buy the song, I also went to see them perform live in London. The set was musically minimal music and focused on the voices with just a drum kit for accompaniment. It was good but a different experience to what I had been expecting after the song I heard.

I personally find the best way to listen to From the Mouth of the Cave is to take in the whole thing with headphones on, without any other distractions. This is because to really appreciate the music Gaggle have created on this album, you arguably need to be able to hear everything. Just a superficial listen might mean you miss part of the ambience they have created with the soundscape of drumming, sound effects, echoes and various other instruments dotted through the songs. As someone who usually likes to keep constantly busy, this is not an approach I usually take but it has definitely been worth it.

From the Mouth of the Cave is like a journey: a somewhat shamanic feeling adventure, which starts right from the opening title track. This gives a sense of entering the cave, as Gaggle eerily invite the listener to “come with me”, then swiftly moves onto the next song, the current single ‘Army of Birds‘, which as well as being devastatingly catchy, functions as an introduction to the group, while they sing “I’m not in your army, I’m in an army of birds.”

The single isn’t the only track that is catchy either. If it’s not ‘Army of Birds’ in my head when I wake up, it’s ‘Power of Money’ (about the financial crisis) or the refrain of ‘Gaslight’. The latter is another song that seems to have a foreboding undercurrent to it and seems to be the only track to feature a single voice during some of the song, whereas all the others are mainly centred on the choir singing as one. ‘Congo’ is less than a minute long and, for me personally, the sounds of chanting and screaming create a visual image of Gaggle as a tribal unit dancing in the moonlight around a big fire. This fits in nicely with the image they create with their almost identical robes and use of facepaint when performing.

Overall, the album feels very kinetic, due to being highly drum-based, although there are many more instruments and sounds used to great effect, creating plenty of interesting imagery (especially on the song ‘Crows’). This strong focus on drumming gives From the Mouth of the Cave a great sense of continuity. Even on the first listen, the rhythmic drumming that is a strong part of many of the songs will have you tapping along to the beat. That’s not to necessarily say that it is a ‘happy’ album; there are dark and sometimes disturbing undertones throughout it. This can be heard, for example, in the last track on the album ‘Leave the City’, with its sound effects of things being unplugged and atmosphere of being in a deserted city alone. Most notably, a grim undertone is also present in the lyrical content of the song “Liar”, which is all about a girl finding out her boyfriend is a liar and eventually killing him.

As with my experience of Gaggle live, their debut album is different to what I expected. I am gobsmacked from the first listen and have never heard anything that sounds like this. There are some small snippets of specific styles here and there: maybe a dash of rap and perhaps a hint of dance, but, overall, Gaggle completely defy genre. In short, they have created something completely new and very exciting.

Gaggle will be appearing at The Rough Trade Store on 25 June and celebrating the launch on Independence Day (4 July) by performing a show at The Village Underground, London.

Hayley Foster da Silva is a vegan and feminist activist, writer and radio presenter of the all female fronted radio show ‘Pigtails and Army Boots’ Currently she has been playing a lot of Garbage’s new material, and great unsigned music from Le Monnier and Rock in Your Pocket