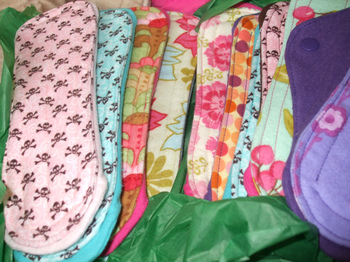 Despite not having the fondest of feelings for Proctor & Gamble as a company, I have used their sanitary protection for around twelve years. Specifically, I use Tampax and Always. I always use the same ‘colour’ pads and tampons, because I know that they will suit me. For this reason, perhaps, I didn’t pay much attention to the bit of additional advertising on the packaging of my Always extra long towels. I went to the loo and did what I’m pretty used to doing by now. But on opening up the neat little purple package, I paused. Sniffed. Had my partner been spraying that manky air freshener again? I shrugged, and continued as normal.

The day went on, and something downstairs felt distinctly uncomfortable. But, as you tend to when hot and harassed and constantly late for the train, I put it down as nothing. Then, when I came home and changed my pad, there was that nasty car air freshener smell again. But it was coming from me! What I was experiencing was Always‘ new pads, with ‘odour neutralising’ technology. You have to hunt quite hard through the small print to see that, actually, it’s perfumed. No wonder my sensitive skin was unimpressed. Despite being ‘clinically tested’ (which could mean anything) there’s nothing to suggest these pads are hypo-allergenic, as you would expect from something that sits against such a sensitive area for up to eight hours.

This change to Always‘ product range has riled me for several reasons. Firstly, I take umbrage at the idea that my vagina should smell like anything other than a vagina. That delicate, synthetic new car smell just makes me imagine a nasty little voice in my head whispering, “You stink, and your nappy knows it.” If, as their advertising says, I feel less-than-fresh during my period, there are several courses of action open to me. Most of them involve hot water and a bar of (high quality, hypo-allergenic) soap. I do not want a highly capitalist organisation dictating how I should smell, particularly not when their choice is so nauseating.

Another reason to be unhappy about the product change is that scenting something as intimate as a panty pad can be damaging to women’s health. Scented and synthetic products cause thrush and bacterial vaginosis – now, that will make your lady-parts smell! So much for being the Proud Sponsor of Mums, a patronising and sexist enough concept in itself, P&G are now potentially contributing to a deterioration in women’s health.

The third reason this has made me so angry is that I actually really like P&G’s sanitary products. I can’t just change to another pad because other pads use really horrible synthetic materials, or don’t have wings, or don’t make their pads long enough. The next best mainstream product for my needs is Tena (Nothing wrong with that, but the size of them does roughly resemble a single memory foam mattress).

But fret not, there are alternatives! For those who are not interested in being made to feel smelly and dirty, or possibly get a yeast infection, there is:

Sanitary towels that go in the washing machine and are reusable. They come in many, many pretty fabrics, some places that make and sell them are www.moonrabbits.co.uk, Etsy and www.luxurymoon.co.uk.

An environmentally-conscious alternative to tampons

Earthwise Girls: Your regular feminine hygiene products, but without the bleaches, perfumes and synthetic nasties popularised by mainstream producers.

[The image is a photograph of a selection of washable sanitary towels in many colours and designs such as skulls, flowers and polka dots. It was taken by our Philippa and is used under a Creative Commons Licence]