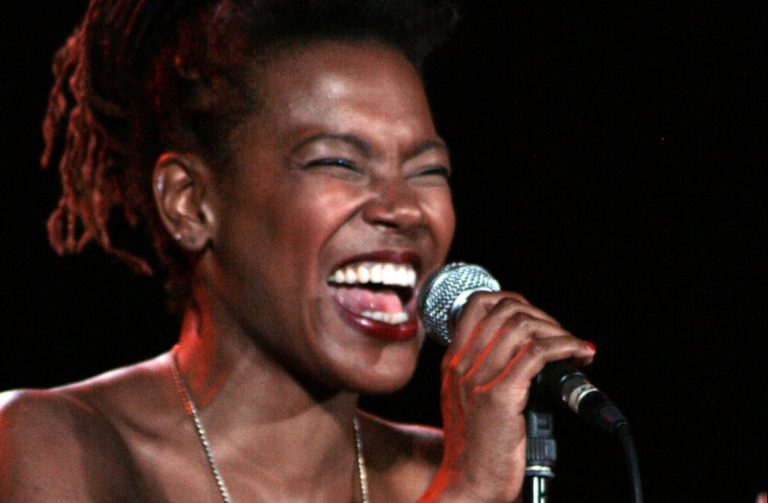 Jazz at Café Society, written and directed by Alex Webb, was first performed at the London Jazz Festival last summer and has now come to the Tricycle for a 6 day run. It tells the story of the famous New York jazz club Café Society, which opened in 1938. These were exciting times, politically and socially, and Café Society was a regular hangout for American left-wing activists, Jewish anti-fascists and civil rights activists. It was founded by Barney Josephson and was the first desegregated jazz club at a time when Duke Ellington still had to enter The Cotton Club via the back door. Josephson’s vision was for a place where people could mix and perform regardless of race or sex. The club showcased the talents of some huge names, including Billie Holiday, Sarah Vaughan, and Count Basie. The production enters into the spirit of the time: old time jazz plays over the speakers before the show begins, and the stage is partly set up as a club itself, with tables at the side of the stage for performers to sit and watch in between their own songs. There’s even a tasty Café Society gin fizz served in the bar at the interval.

The show is narrated by Josephson, played by Radio 3’s Max Reindhart. Reindhart guides us warmly through the club’s 10 year history, in a (sometimes shaky) New York accent, telling us about the acts who played and sang there and explaining the historical backdrop. The story is sprinkled liberally with vocal performances from Gwyneth Herbert, China Moses and Alexander Stewart, who take on the guises of some of the singers who played at the club.

One thing that emerges during Josephson’s account of the time, as the performers flit between singing roles, is the array of exciting women artists the era spawned

Jazz at Café Society is a curious hybrid of a show and some aspects of it work better than others. The Café Society All Stars band provide a brilliantly tight and energetic jazz backing to the production and Herbert, Moses and Stewart prove adept at channeling several of the Café Society stars. Webb has spoken in interviews on Radio 3 and BBC London about his love of jazz history and there is a real affection and warmth for the period reflected in the script and performances.

One thing that emerges during Josephson’s account of the time, as the performers flit between singing roles, is the array of exciting women artists the era spawned. All three performers are great singers but it is Herbert and Moses who have the most range, as they deftly switch between quite different styles. Moses begins and ends the production as Billie Holiday but her performance takes in the bluesy gospel of Sister Rosetta Tharpe and the soft sweetness of French chanteuse Lucienne Boyer. Similarly, we get classic feisty jazz singing from Herbert as she performs the songs of Sarah Vaughan and Nellie Lutcher but we hear something altogether different with her portrayal of the folk singer Susan Reed.

A standout moment of the first act was Moses’ turn as Sister Rosetta, the singer and guitarist who, as Josephson tells us, “brought Gospel music out of the church and onto the stage”. With a storming performance of the up-tempo gospel song ‘Rock Me’, Moses captures the swagger, energy and spirit of the singer. Moses also makes her mark at the end of the show. Josephson tells the story of how Billie Holiday made the now famous anti-lynching song ‘Strange Fruit’ her own and Moses ends the show with a suitably powerful and haunting rendition of it.

Herbert’s startling performance as Susan Reed on the ballad ‘Lord Randall’ is another high point. It is a raw, bare-bones performance – Herbert accompanies herself on the lute, with minimal backing from the band and nowhere to hide. Her vocals begin high-pitched and fragile and become spirited and defiant as the song progresses. Later on in the show, she sings Nellie Lutcher’s fantastic paean to female desire ‘Hurry on Down’ – an upbeat, pacey number with a kind of frantic sexuality. Herbert’s performance has all the urgency and spirit the song deserves and her vocal builds to a squealing climax. “Hurry on down to my house baby,” she pleads, before almost screaming, “C’mon honey, you must, you must!” What we see here, both in Moses and Herbert and in the artists they portray, is a striking female subjectivity – women artists who are bold, sexual, who are in control of the music they perform.

Jazz at Café Society isn’t quite sure what it wants to be. Play? Musical? Revue? In the end, however, none of this seems to matter much

In a recent interview on Radio 3, Webb admitted that his show is driven by great jazz vocal performances. This is true and it is both one of the show’s strengths and weaknesses. The vocalists come alive and fill their roles with ease and assurance when singing. But in between songs, standing and watching or sitting at the tables sipping drinks, called on to act the part, they sometimes look unsure of what to do with themselves. Reindhart’s stage patter doesn’t always work – there are moments when his nods to audience members and calls for crowd participation feel clumsy. Further, on Monday night there are a few opening night glitches and at times it seems a touch under-rehearsed – a technical fault with the microphone near the start, a few fluffed lines by Reindhart (despite reading from a script) and several hairy moments during the a cappella gospel number ‘Stalin Wasn’t Stallin”.

Overall, it feels as if Jazz at Café Society isn’t quite sure what it wants to be. Play? Musical? Revue? In the end, however, none of this seems to matter much. On opening night the audience is packed full of enthusiasts, who murmur appreciatively when familiar songs and singers are introduced and who are clearly enjoying themselves. And, really, what’s not to enjoy? There are shaky moments throughout, but the songs are fantastic, the musical performances are engaging and it is a great story. So, while it may not be a fully rounded piece of theatre, it’s probably on this level that the show is best appreciated – an enjoyable retrospective of a fascinating time in musical history, written and performed with love.

Jazz at Café Society was at The Tricycle in London.

Eli Davies is a teacher and writer. She blogs at www.elibloglondon.blogspot, tweets at @EliDavies and is writing her first novel